Searching for fresh air in India's Darjeeling and Sikkim

Stories from the road India
13 December 2018

The air pollution in India is terrible. After having spent a full month in Delhi preparing Basanti for my trip, I had completely destroyed my lungs and picked up a bad cough. I started my trip riding east from Delhi, hoping the air pollution would get less. It didn't. I even dare to say that the air pollution got worse. At some point, I had enough of it. I was craving fresh air so badly I couldn't think of anything else.

After studying my map I realized that the biggest chance for some fresh air would be at the hill station of Darjeeling. Google maps proudly told me that it would be an 11-hour ride. But I was desperate for fresh air, so I did it. I rode from Vaishali to Darjeeling in one go. All went well - until the last few kilometers. 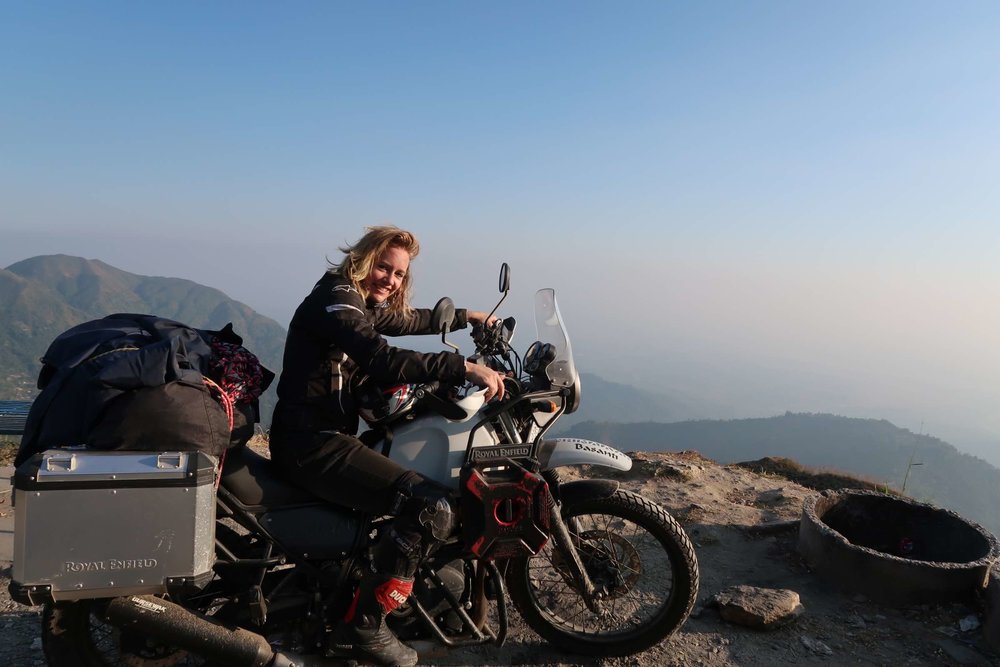 Awkwardness at a petrol station

I have this habit that I always fill up my tank at the end of a riding day. A great habit, if I may say so. It makes me feel good when I can start riding the next day, knowing that my tank is full.

After a long day of riding, I arrived in Darjeeling and stopped at the petrol station to fill up Basanti. When riding away I noticed I had to make an awkward turn. With my bike fully loaded and me not paying attention for just one second, turned out to be fatal. I had let go of the gas handle for a split second while making the sharp turn. And there she went, to the ground in the middle of the road. Since I had no speed whatsoever, I managed to semi-elegantly jump off before I too had to kiss the street.

There was Basanti in the middle of the road holding up all the traffic. So you have to take my word for it that I felt a tad bit embarrassed. Alright then, I felt more like a big fail.

Together with the guy who had just filled up my tank at the petrol station, we lifted Basanti back up. All I could think was “GO! DRIVE! Get out of here before anybody starts talking to you!”. Which was a great idea in itself, except that Basanti didn't start anymore. The petrol guy started shouting: “Overflow. Overflow.”

Was it overflow? Until now I have no idea what happened exactly. I only know that it must have something to do with petrol and overflow. That's all I know.

**Feel free to drop me a comment down below with the science behind this phenomena.

But I do know now how to fix this problem.

Pretending as nothing happened, I rode the final couple of kilometers to my hotel in Darjeeling.

For a very long time, I thought that Sikkim was the place where Sikh people lived. I could not be more wrong.

Sikkim is a relatively small appendix in the north of India bordering Bhutan. This mountainous region is home to the Sikkimese. They are a mix of different people. Some migrated from southern Tibet to here, others came from Nepal and also indigenous tribes have lived here for centuries. Most people speak Nepali in this region of India.

Sikkim was on my list for a long time and finding myself in Darjeeling, I could almost smell Sikkim. Or well, I could see the snow-capped mountain peaks of Sikkim from Darjeeling.

Anticipating similar riding conditions as in Ladakh, I decided to visit the area on a day trip. I left my heavy luggage, spare parts, and tools behind in Darjeeling and went straight to Sikkim.

I decided to ride to Namchi, located in southern Sikkim. The north of Sikkim is without a doubt more spectacular to ride through with its high snowy peaks, but that was not doable as a one-day trip.

Nonetheless, the ride through the south of Sikkim was also absolutely fantastic. The road was rough and the views amazing. It was exactly the type of terrain that my motorbike was made for! 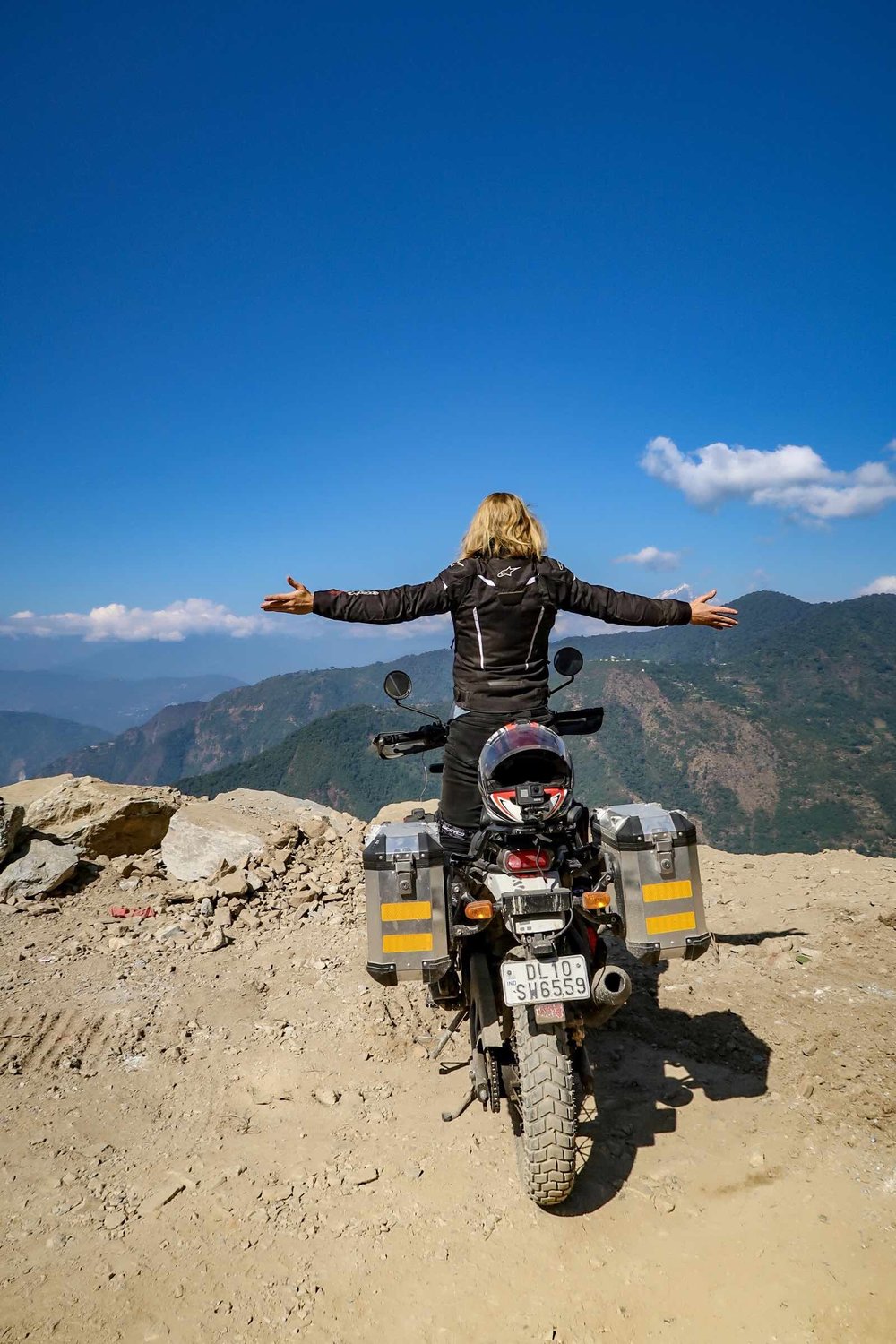 After arriving in Namchi, I headed to the Siddheswar Dham. This temple complex is spread over 29 hectares on top of the Solophok hill. Its temples are replicas of the 12 Jyotirlingas (also known in English as Lord Shiva Shrines) and Char Dhams (a set of four pilgrimage sites) in India.

Visiting this place is believed to wash away your sins. I mainly enjoyed the views and the sunshine. Unfortunately, I did not stay as long as I wanted to. More and more, I felt uncomfortable with all the requests from locals to take a selfie with me. It was too much to handle.

When riding back to Darjeeling, I picked a road that was in worse shape than the one I took to get to Sikkim. Basanti and I were bouncing through the mountains, loving every minute of it.

When I arrived at the border control of Sikkim, I parked my bike in order to get my permit signed, When I returned, Basanti had fallen over again. This time it was not my fault. A local couldn't keep his hands off her and tipped her while parked outside. No recording of that incident, but I did record my trip through Sikkim.

Good to know  when going to Sikkim

To get into Sikkim as a foreigner, you need a special permit. Arranging this permit in Darjeeling is quite a hassle and can take up a half-day. Better is to get it at the border with Sikkim. All you need to bring is a:

You'll get the permit within 5 minutes. Don't try to cross the border into Sikkim at Jorethang. This crossing is closed for foreigners. You can only enter Sikkim via the town of Melli from Darjeeling.

This happens when you follo... In search of the sacred Bod...

I've enjoyed your YouTube videos for a few years now, and have recently discovered the blog. The additional insight and details make me want to go back a rewatch the videos for a third time. As always, you are an absolute inspiration. Thanks for all the content!!!