This happens when you follow Google Maps blindly in India

Stories from the road India
17 December 2018

Have you ever seen the video of a woman driving into the metro station because her car navigation told her so? I've always chuckled about those women. Knowing I would never do something like that. Well that is not true, I did something similar during my ride from Darjeeling to Tura in India.

The road to Cooch Bihar

Riding out of Darjeeling,  leaving the lush, green mountains behind me, I felt a bit sad. I absolutely love to ride in the mountains and did not like the idea of replacing them for flat terrain. At the same time, I felt excited to enter the Northeastern States of India. I was getting closer to the border with Myanmar.

Back on flat terrain, I passed kilometer after kilometer of tea estates. I wanted to take a picture of myself surrounded by tea plants. I scanned the estates for quite some time to find one without a fence and without curious people nearby. When I had the opportunity, I jumped off my bike and got into the field. 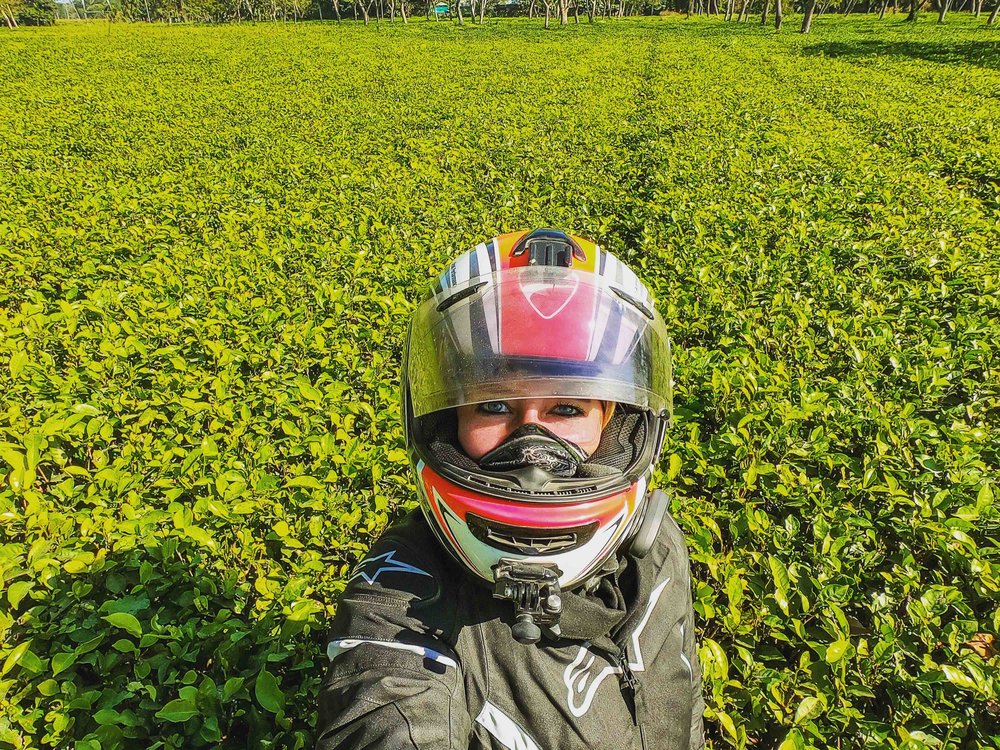 After this short tea-intermezzo, I continued my journey towards Cooch Bihar. This old colonial town is a good place to stay for the night whenever you find yourself somewhere between Sikkim and the Northeastern States.

Located on the foothills of the Himalayan, it has had quite a turbulent history. The small kingdom of Cooch Bihar got seized by the Bhutanese king in 1772. They then made a deal with the British East India Company, who would help them to fight off the Buthanese king.

In return for the help of the Brits, the kingdom would become a princely kingdom under the protection of the British East India Company. When India gained independence in 1947, this region came under the control of the Indian government. Today it is part of the Indian state West Bengal.

In 1887, Cooch Bihar Palace was built. It was modeled after the Buckingham Palace. I've never seen Buckingham Palace myself but judging from what I have seen on television they did a pretty good job.

You cannot miss the palace when you ride into town. I went inside to have a closer look at the building. As a foreigner, it's a steep 300 rupees to enter the premises (4,30 USD/3,75 EURO). Indian nationals pay 25 rupees. The palace is still surrounded by a large garden, one of those rare oases of quietness within a busy Indian city.

From Cooch Bihar to Tura

The next morning I left Cooch Bihar, excited to enter Meghalaya,  another state of India. My 7th state already during this trip.

The next morning, I was woken up at 5 am by the nearby mosque when their call for prayer was announced over the speakers.

Some moments later, I typed in  ‘Tura' as my destination on Google Maps and pressed ‘ROUTE'. Off I went. No clue as to which route or road I was taking, I had done no preparation beforehand. I just followed the directions on my phone and enjoyed the views during my ride.

At some point, I noticed the road was getting a bit sandy, and then sandier, and even more sandy. I suddenly realized I was riding on a beach! What had happened? When I looked on my Google Maps app, it gave the following instruction ‘Take the ferry'.

Looking at the crowds on the beach, I noticed that most people were descending from very tiny wooden boats. I scanned the area for a larger ferry, one that would take cars. I didn't see any. Bystanders told me that I had to pass the mighty  Brahmaputra river in one of those tiny boats who were laying on the shore with only a very small ramp for exiting and entering.

I noticed two bikes coming off one of those tiny boats. It was possible. I watched them closely. The riders didn't get these bikes off the boat smoothly. And even more importantly, their bikes were much smaller and lighter than mine. Furthermore, I had no idea how the landing site on the other side of the river would be.

I was fighting a battle in my head “Imagine the awesome footage and stories of getting my bike on this boat” against “Basanti will fall off the ramp and dive into the water, ending my motorbike adventures right here, right now!”

In the end, I decided I was too attached to my Basanti and would not want her to get injured. I studied the digital map on my phone to find another route. The nearest bridge I could take to cross the river was a 2-hours ride away.

When I finally made it to Tura, I was exhausted. Luckily, I got to spent the night in one of the cutest accommodations I have ever slept in: a treehouse! I quickly forgot all about my little beach-disaster.

And still, it was not as bad as driving a car into a metro station, right? 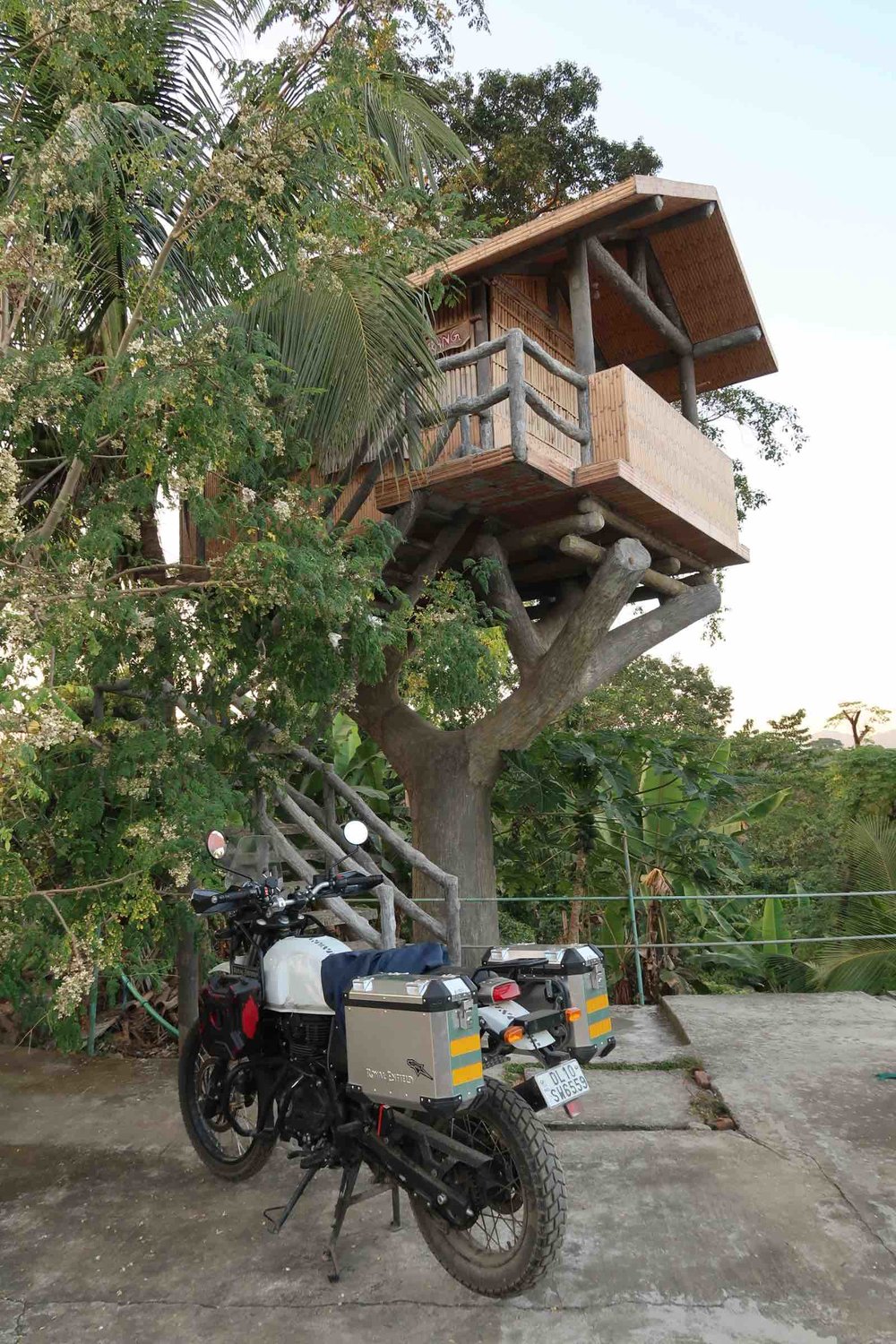 To Shillong for maintenance... Searching for fresh air in ...

An amazing place to decompress after a days ride.

Through the heart of Uttar Pradesh to experience a Ganga Aarti