Through the heart of Uttar Pradesh to experience a Ganga Aarti

Stories from the road India
7 December 2018

After taking Basanti out of that dusty, old garage in Mathura, I continued my journey through India. Next destination: Lucknow.

I prepared myself for another long ride on a crowded road. After I entered the Agra-Lucknow Express Way, which is a relatively expensive toll road, I encountered a completely empty road. No car or person to see! Well, that was the first time for me in India.

What nobody had told me was that along this road there would be no food stalls or petrol stations. Only after every 100 kilometers or so I came across a rest stop where you could get some food and petrol, but other than that there was nothing to eat or buy.

I had not anticipated that, and it almost caused me to run out of fuel. Until then I hadn't filled up the extra fuel cans. I thought it was not necessary as I was not riding in a remote area. So far I had seen petrol stations on every street corner.

While riding on the Agra-Lucknow Express Way, I constantly checked my fuel gauge. Slowly my palms became very sweaty. I had not much fuel left in my tank. In made al sorts of crazy math calculations as to how far I could still ride. Right before Basanti would have come to a screeching stop alongside the road, I came across a petrol station. I quickly filled her up to the top, and added some petrol love into the extra fuel cans as well. I had learned my lesson.

Lucknow - the capital of kebabs

The capital and beating heart of India's state Uttar Pradesh is Lucknow. Also known as the city of kebabs. Here I sampled the best kebab I ever had in my life.

A couple of weeks ago, I attended a Kashmiri wedding. There I met Sufian, who lives in Lucknow. So when I arrived in Lucknow, I met up with him in the evening. He brought me to Tunday Kebabi. It is one of Lucknow's most famous kebab restaurants. The restaurant has an entire wall covered with photos of Indian movie stars who had come here to eat. Even though it is not allowed anymore to slaughter cows and water buffalos in Uttar Pradesh due to religious regulations, we were able to get our hands on an incredibly soft, tongue-melting water buffalo kebab.

With a full and happy belly, I returned to my guesthouse. The next day I would be riding to Varanasi. With the first morning light settling in, I took off with Basanti. On my way to Varanasi, I made a quick stop at Rumi Darwaza. This impressive Mughal gateway is surrounded by beautiful buildings such as the grand Victorian Husainabad Clock Tower and the 18th century Bara Imambara shrine. The sun was still rising and the air pollution was terrible, but it did make the place look mystical. 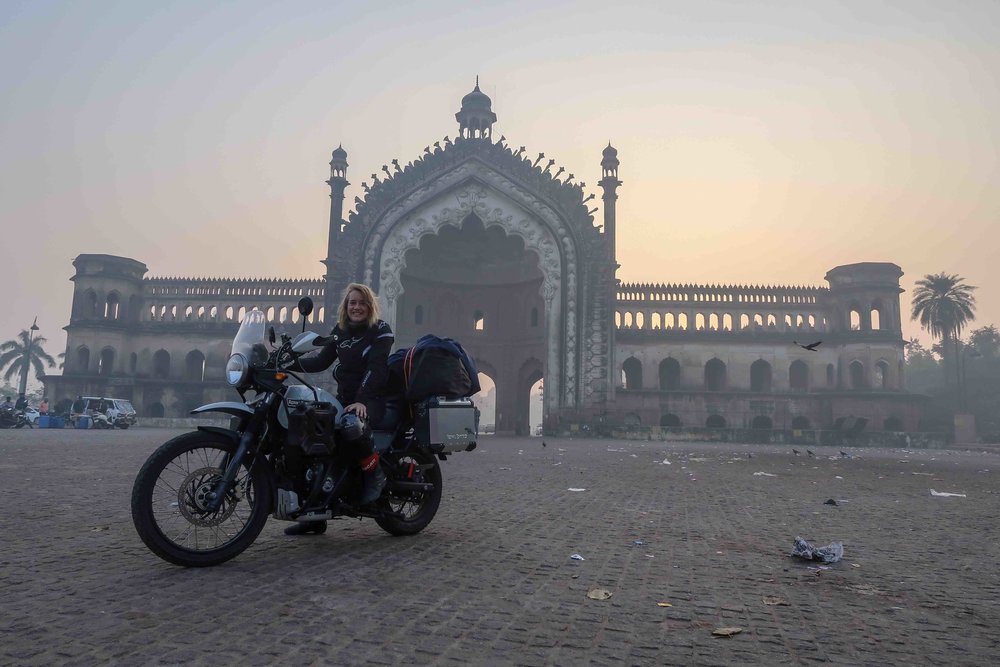 From there I continued to Varanasi. A city that I had visited 8 years ago for the first time. At that time, it made a huge impression on me.

Hindus believe that if you die in Varanasi, you'll escape the cycle of reincarnation and are liberated forever. There are special ghats , steps leading down to the Ganges river, where people bring the bodies of their deceased to be cremated. These cremations are held 24 hours per day.

After the cremation, the ash is scattered into the holy Ganges river. Young babies and pregnant women are not cremated but placed straight into the Ganges as Hindus believe their bodies are already pure.

The sight and the smell of burning bodies is something I would not forget easily. When I visited Varanasi for the first time, I also went on a boat trip on the Ganges river. I still remember the moment when a dead baby floated by our boat.

Every night around sunset, the Ganga Aarti ritual is performed in the three holy Hindoe cities of India: Rishikesh, Haridwar, and Varanasi.

I've seen the Ganga Aarti in all three cities, but my favorite remains the one in Varanasi. To me, it is the most powerful and uplifting one.

An Aarti is a ritual in which fire is used as an offering. A small clay oil lamp baked in the shape of a cup is put in the river. On it are flowers. Since it will be floating down the Ganges, this Aarti is called the Ganga Aarti.

In Varanasi, they focus during this ritual on the choreography of a group of young pandits, religious leaders, who wave and circle large inflamed lamps in elaborate patterns. Their movements are synchronized and accompanied by chanting and the sounds of cymbals. During the ceremony, the air is smokey and filled with the smell of burning sandalwood. 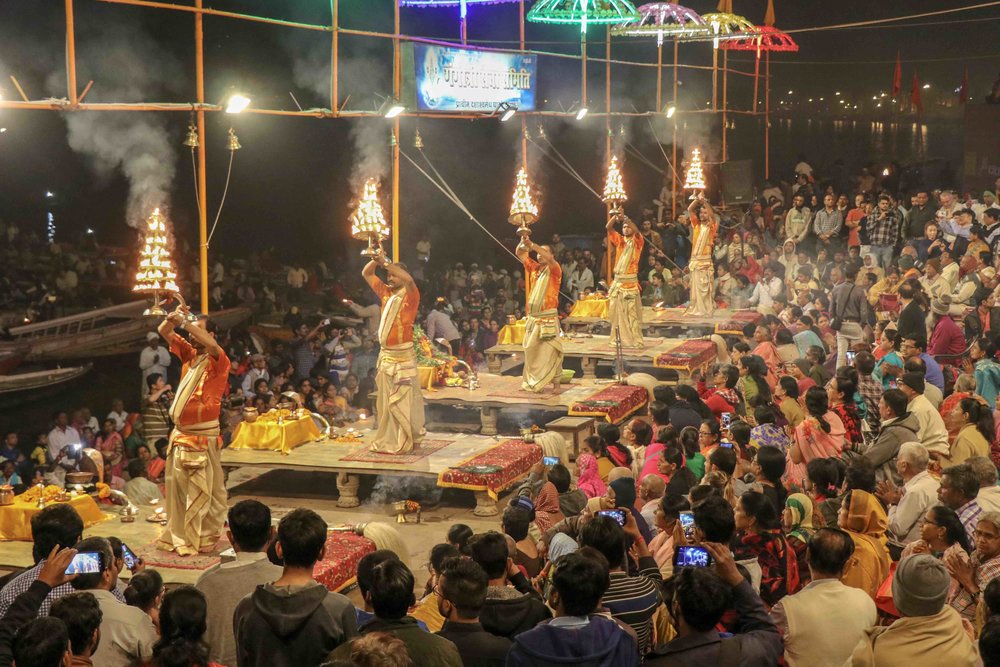 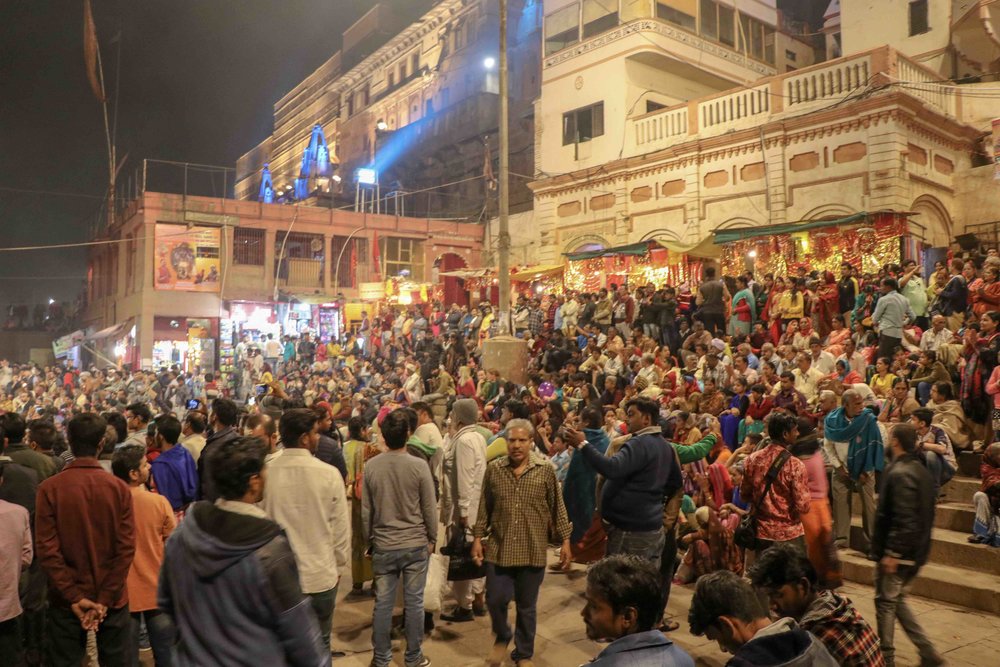 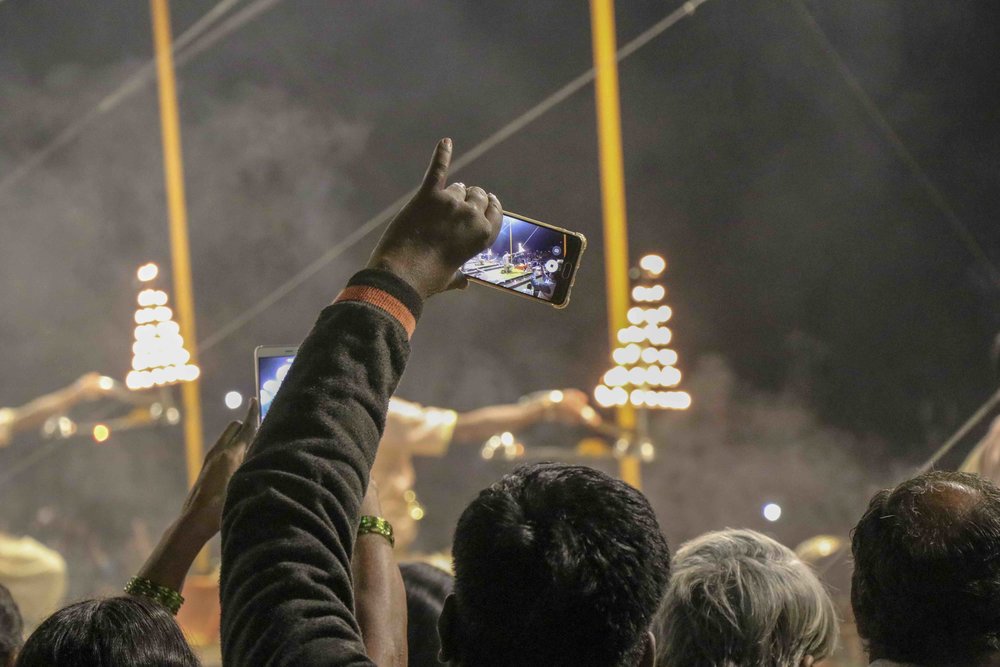 It was great to visit this special place in India for the second time. Now, I could enjoy the rituals even more as I was less troubled by culture-shock. I had also spent already a few months in India, which made me probably also more immune to sightings that otherwise would have shaken me to my core. Or perhaps it was that this time I didn't see a dead baby floating down the river.

Either way, I enjoyed my stay in Varanasi.

In search of the sacred Bod... First time on the road with...

Running on fumes is an Itchy Boot pastime for Noraly.