How I came to terms with riding in the rain

Stories from the road Europe
4 October 2020

Being born and raised in The Netherlands, with its fair share of rain throughout the year, one might think I am used to riding in the rain. Quite the opposite is the case. When I bought my first motorcycle in 2015, a Ducati Monster 796, I definitely could be described as a fair-weather rider.

I never felt very comfortable riding on wet asphalt. Every time I made a turn, it felt like the tires would fly from underneath me. My visor would be covered with raindrops, reducing my vision to almost nothing. And when I would finally arrive at my destination, I had to find a way to take off my dripping suit and boots without making a huge mess. It was too much hassle for me and too little fun, so I avoided riding in the rain as much as I could.

Expert in avoiding rain during season 1 and 2

When I started my YouTube channel and began to record my daily motorcycle adventures, my discomfort with riding in the rain was not the main problem, filming the ride in the rain was. Besides low visibility, the drops on the camera lens made the recordings look awful. A 15-minute video where you constantly see raindrops on the lens, is just too painful to watch. I also struggled with changing my camera batteries in the rain and keeping my other electronic devices dry such as my phone and USB charger. All in all, it gave me another reason to avoid riding in the rain!

Looking back on it, I can not believe how little rain I encountered during my entire Itchy Boots Season 1 and 2. Although I have to say that I usually checked the weather forecast the day before and when it predicted a rainy day, I would just stay in the guesthouse working on editing videos or writing a blog. That way, I mostly rode in beautiful sunny weather and only encountered a single short shower during an entire day of riding and recording. And it did not even bother me that much when I encountered several showers in Thailand. The water was warm, so everything got wet but I was not cold.

When I decided to go and ride in Iceland, I knew I had to find a way to deal with rain as Iceland is known for unpredictable, highly changeable, and downright horrendous weather. Of course, I kind of hoped the weather would not be that bad in early August and that luck would be on my side.

But in case it wouldn't, I decided to think well about my riding gear and rain protection. I chose a rainjacket en trousers that I could quickly pull over my suit when it would start to rain. I also had a pair of gloves with me that was 100% waterproof.

When I rode off the ferry on the eastern side of Iceland, the weather was sunny and it was close to 20 degrees Celcius that day. Pretty spectacular for a country whose northern areas lie within the Arctic Circle! I did have a feeling though that this perfect weather would not last forever so I lingered around in the sun as long as I possibly could. I am glad I did because during the rest of my stay in Iceland I never had such sunny weather again.

After this perfect first day, I experienced the complete opposite type of weather on the second one. The entire morning of that second day I had to deal with strong ice-cold side winds while the rain poured down on me leaving me with no visibility at all. I was very lucky to come across a nice and warm coffee place in the absolute middle of nowhere. It was surrounded by black lava fields for as far as my eyes could reach. My original plan, when I started traveling again, was to completely isolate myself but with this kind of weather, it would not be possible. On rainy days like these, I need to find a place to warm up and relax. Nobody can ride in this type of weather for a very long time. 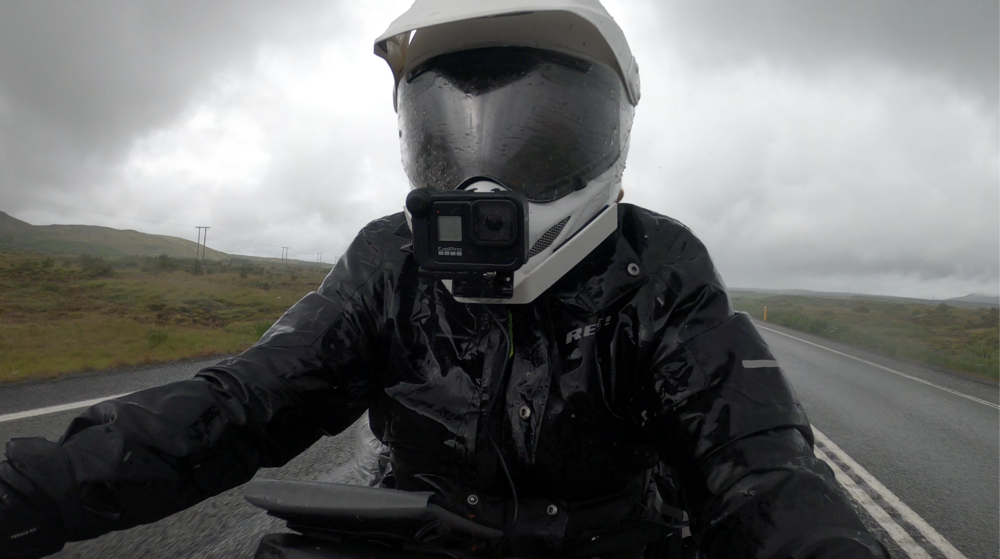 During the rest of my two weeks in Iceland, I experienced dry and rainy weather during most of my rides. And when it rained terribly, I just turned up the volume of my music inside my helmet and had Ronin ride on full throttle. Luckily most of the asphalt roads in Iceland don't have sharp corners, so I did not have to worry about wheels slipping from underneath me.

Slowly I accepted that traveling in Iceland meant I had to deal with the elements. There was no way I could avoid riding in the rain. And while I suffered at times, it certainly gave the entire experience more depth. I loved it when after a shower the sun would come out and color the landscape in the most amazing array of green colors. At the same time, my endurance and positive attitude were challenged on days when I had to deal not just with the rain but also with strong and cold side winds. And even on those days, I would forget all about being cold and wet when I saw a unique landscape or a bright blue block of ice in dark water.

I always wanted to go to Iceland for its amazing nature and as a geologist, I also wanted to see with my own eyes some of the unique natural phenomena in Iceland. One of the highlights of my travels through Iceland was Thingvellir National Park where you can see the mid-Atlantic ridge above water. It is the only place above sea level where you can see how the American and Eurasian continents are moving away from each other. Continental drift is literally ripping Iceland apart, making the country grow with 2.5 centimeters each year. I will also remember my visit to the West Fords, which I had not planned to visit but was recommended to me by locals. It was definitely worthwhile the detour! 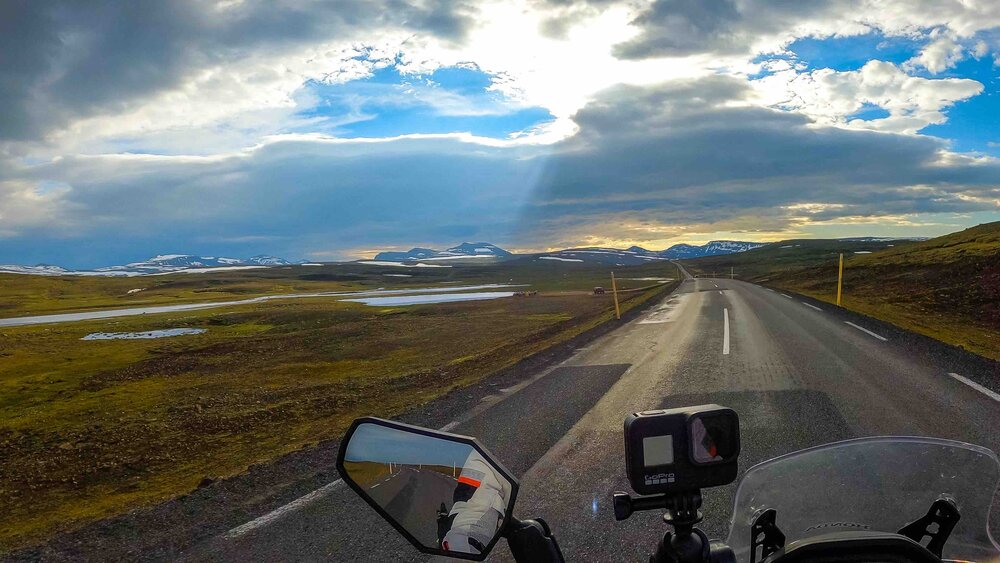 The only thing I would not do again in Iceland is camping. Setting or packing up a tent in the pouring rain is just miserable. I constantly had to put wet and damp clothes in my luggage (the smell!) and also my electronics didn't respond well to all the dampness in the bags and tent. In the end, I stayed several times in a guesthouse or camping pod so I could wash and dry my clothes and equipment.

I don't think I will ever get overly excited and happy about riding in the rain, but instead of frantically checking the weather forecast every single day in order to avoid it, I learned that you can still have an amazing adventure even when it is raining cats and dogs.

Preparation for the long days of rain when you had to stop filming in Norway and head south. You're a tough woman Noraly.