Riding to North Cape, is it worth it?

Stories from the road Europe
1 November 2020

Riding to North Cape is something that is on many motorcyclist's bucket list. It was not on mine, and I never quite understood the reason why so many bikers wanted to go there.

But, when I was planning my northern Europe trip, I hadn't even considered going to the North Cape. Way too far up north, and probably a boring ride too.

Visiting North Cape was not planned

My plan was to ride from Sweden into Finland and from there take the boat to Estonia. But, when I was refused at the Finish border, I had to come up with a plan B. I had two alternatives, one was backtracking through Sweden and take the boat from Stockholm to Estonia, or ride to Norway.

I opted for Norway, as I didn't want to travel 1300 kilometers back on pretty much the same route. So, Ronin and I rode to the border of Norway and we were allowed in. After riding almost 700 kilometers that day, I arrived in Bjerkvik, Norway. There I checked my map to see where I exactly was in Norway. It turned out that I was only 700 kilometers from the North Cape too!

But, autumn was falling and autumn tends to fall very quickly in the northern parts of Scandinavia. The days were getting darker, colder and snow was on its way. There was no time for me to explore the area leisurely if I decided to visit North Cape. In order to get there in time, I had to ride Ronin as I'd never done before! But at the same time, turning my back to North Cape, while I was this close, wasn't an option either.

The day before I had already ridden 700 kilometers. So, I knew I would be able to ride up to North Cape in just one day. It would be a long day because, besides the huge distance that I had to cover, I also needed time to film the ride for another YouTube episode. Filming easily adds several hours to a riding day. It just meant I had to be extremely time-efficient in order to reach North Cape before dark. There was no time to fiddle around with cameras.

I set off in the early morning and the weather remained fantastic the whole day. The entire 700 kilometers riding north, I was snaking through simply breathtaking scenery. I passed fjord after fjord, several small villages with colorful houses, and endless plains with roaming reindeer. The further north I got, the fewer villages I passed. In the end, it was me, Ronin, and Norwegian landscapes.

About 13 kilometers before I reached North Cape, I stopped at the last town, Honningsvåg, for a fill-up on petrol. Honningsvåg turned out to be a very lively town. I had no idea that people actually lived this far north. At the same time, I wondered how the 5.000 people habiting this town, would get through those endless winter months of complete darkness. It certainly is not my cup of tea!

When I finally drove up to the parking lot and turned the key to shut Ronin's engine off, I just sighed. A few moments later, I peered into the distance from a 300-meter high cliff that I was standing on. The North Pole was only 2000 kilometers from here! 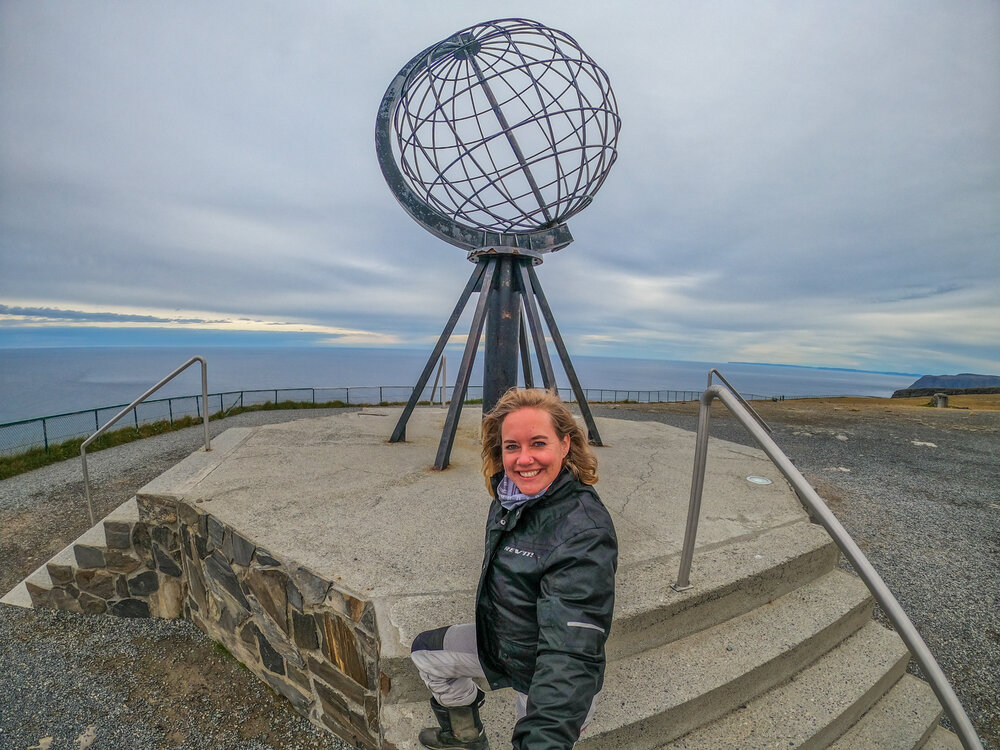 After walking around for a little bit, I was ready to go and ride the 10 kilometers back to the cabin I had rented for the night. Then, just before leaving, I realized I hadn't walked up to the monument for a picture. I quickly went and took a nice photo of myself and the globe behind me.

In the cabin, with a nice cup of tea, I realized that every biker I know, that has visited North Cape, had taken a picture with their bike in front of the monument. I have seen so many of them, it is the ultimate picture to take after riding to North Cape. I hadn't even thought about taking such a picture when I was there! I was just too impressed with the entire place and the ride to it.

Later I was told by locals that the clear conditions I had experienced were very unusual. Usually, there is a thick fog hanging around the cliff, blocking every view. I realised my enormous luck choosing this day to come here.

Is it worth it?

If you ask me, is visiting North Cape truly worth it, then my answer would be without a doubt: yes!

Finding yourself above 71 degrees northern latitude, which is far more north than you can ever reach in Alaska, is just magnificent. And yes, those last 13 kilometers to North Cape are simply stunning. And yes, I was in awe with the view from the cliff, and yes the monument is perfect for a picture with or without your bike.

I do understand now why so many motorcyclists have North Cape as a destination on their bucket list, and I can now honestly say: I am a fan of this place too! North Cape is special. And if you have the opportunity to go there with your motorcycle, I think you should do it! Weather permitting, of course…

Noraley, you came back from NorCap thru Lyngseidet, I spent 3 summers there 1967-70 right at the north bit of the peninsula and especially its East side ... Zodiac RIB access. Earned my PhD (geology) there ... examiners more interested how I'd survived than the rock bit. Was eagerly gobbled up by Saskatchewan geo community to figure out the rocks in the north of that province for their uranium, then went to south bit to figure out how to drill horizointally for oil ... a splendid career.
Noraley, you've completed PhD's oodles of times, and both learned plus demonstrated how to use YouTube for communication. My PhD thesis lies dusty in a library, your videos are world wide
Congratulations
Robert Munday ... geologist ... Airdrie Alberta

You should come back to Norway and spend more time exploring our conrty. Absolutely love your videos on Youtube. Keep on makeing good contet!

What I love about you Noraly is that you are a traveler, not a tourist, and have to remember to take pictures because you enjoy the uniqueness of the nature around you.