Stories from the road Europe
1 September 2020

In the first week of April, after 6 months of motorcycling through South America, the dream of riding to Alaska ended quite suddenly. Instead of making my way towards Central America, I was boarding a repatriation flight back to The Netherlands, while leaving my motorcycle behind in Peru.

At that time, I felt I had failed my adventure. I was fleeing Peru while abandoning my motorcycle. I wished to just ‘ride out' the storm in Peru and then return to my normal routine and ride to Alaska. Looking back at it, I feel incredibly lucky to have ‘escaped' in time. Even now, almost 6 months later, I would have still been stuck in that small town called Lampa with no end in sight regarding the lockdown.

Resetting my mind and life

Going back to The Netherlands turned out to be the best decision I could make. But, arriving in my home country felt strange. With no motorcycle to ride, I felt like a bird with clipped wings. I rented a small apartment in Utrecht and the first couple of days I just stayed inside staring at the ceiling. What was I supposed to do now?

I had built a new life around motorcycling the world and without the possibility of creating videos of my journey, I had no income. And when I realized it might take many more months before I could ride again, I can not deny starting to feel a bit desperate. Was this the end of Itchy Boots?

Fortunately, these dark feelings only lasted for a couple of days. Soon I realized two things. The entire world was dealing with the exact same problem as me, we were all in the same boat. But many, many people were in a worse situation than me, I was one of the lucky ones. Secondly, I realized that I could see this period as a time for new opportunities.

I had so many ideas of things I would like to do, and now I had the opportunity to work on some of them. Things I don't have the time or possibility to work on when I'm on the road. I became determined to work hard and take Itchy Boots to the next level. I wanted to continue what I was doing now, for many years to come. Going back to a 9-5 job or working as a geologist seemed so horrible that it gave me an enormous drive to work even harder to make Itchy Boots work. 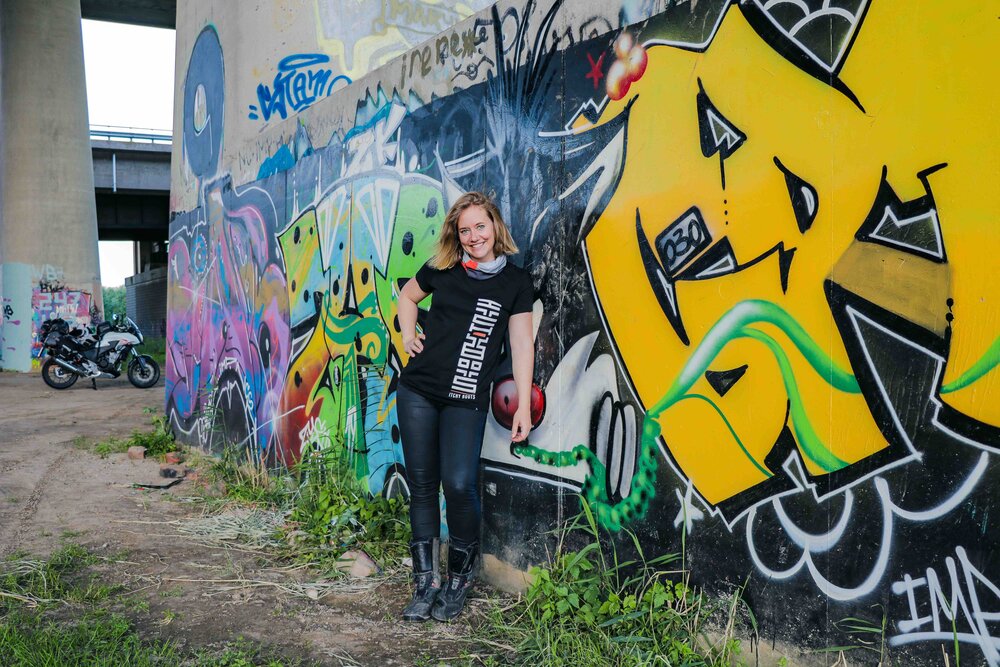 I started working with a designer and a small group of people on a new logo and a new webshop from where I can sell merchandise even when I am on the road. I experimented with new camera equipment and new editing techniques in order to become a better filmmaker. All the while, I dreamt of being on the road again.

In the meantime, the importer of Royal Enfield in The Netherlands lent me a motorcycle so I had some wheels to create content about my own country. And while it was great to go out for a day or so, I still missed being on the road full time. Traveling is my life, it has been for the past 10 years and I think it will always be. I feel the happiest when I swing my leg over a motorcycle that is loaded with all that I own, and start riding without knowing how the day will pan out.

Returning to my normal life

After about 2,5 months in The Netherlands, it didn't look like the world was going back to ‘normal' anytime soon. If anything, the situation was getting worse worldwide, also in North America. With no end in sight, I knew what I had to do. I was going to buy a motorcycle so I could tour around Europe in the meantime.

Staying closer to The Netherlands felt less risky and in most European countries the situation was relatively under control. But I mostly wanted to pick-up my old life again. I knew I could not travel in the same way as before. No more handshakes and meeting locals while on the road. I would have to camp and isolate myself as much as possible. I knew it can be lonely traveling this way but that was a small sacrifice I was willing to make in order to return to my normal life.

Again, I felt like one of the lucky ones because in so many countries travel is still banned and people are forced to stay inside. My heart went out to all the people around the world that are in much worse circumstances than me. But I also sincerely hoped that my content would bring some distraction and light into the lives of those who cannot travel.

From the moment I decided to buy a motorcycle and do a European tour, my energy levels went through the roof. Immediately, I thought: I have to go to Iceland! This country has been on my list for such a long time because it is an absolute highlight for any motorcyclist and geologist. When I decided to go to Iceland, I had to act quickly. The motorcycling season in Iceland is short and ends around mid-August, and I still had to buy a motorcycle and make it adventure-ready!

Getting ready for season 3

Buying the motorcycle went fast. I looked online for motorcycle occasions within my budget. Luckily, there wasn't much to choose from in the adventure motorcycle segment. One test ride later and I was the proud owner of a 2015 Honda CB500X! For more details on why I bought this bike, check out this episode on my You-Tube channel.

When I rode home after I had picked up my new bike from the dealer, I felt great. It was simply put: a blast! Firstly, I was on my own motorcycle again instead of a borrowed one. I had twice the horsepower compared to the Himalayans that I used to ride. And even though the weight of the Honda was almost the same as the Himalayan, the bike felt so much lighter.

I can comfortably ride 140 kilometers per hour on the highway now, which was one of the reasons why I went for this motorcycle. I wanted to cover distances quicker when on the highway and travel more quickly to interesting places. My new motorcycle, which I named Ronin, was clearly superior to the Himalayan on the tarmac, as expected. Off-road it might be a different story of course…

It took me a month to order and install the accessories to make her ready for the European tour. You can read about the motorcycle's accessories I bought in this blogpost here.

I barely slept the night before leaving. I was nervous and excited at the same time. What if people would not like my videos of Europe. What if I failed the COVID-19 test I had to do prior to boarding the boat to Iceland. What if countries would lock their borders again. But at the same time I knew, this is exactly the type of insecurity that makes me thrive. It's time to start living my life again!