The Netherlands is a country of water, and when you ride your motorcycle through the Netherlands you have many opportunities to see some of its unique waterworks.

These waterworks were not only created to keep the water out but also to keep enemies from conquering the Western part of the Netherlands.

In my video series about motorcycling in the Netherlands, I visited several interesting sites connected to water management. From the well-known polders and windmills to the world-famous Deltawerken. 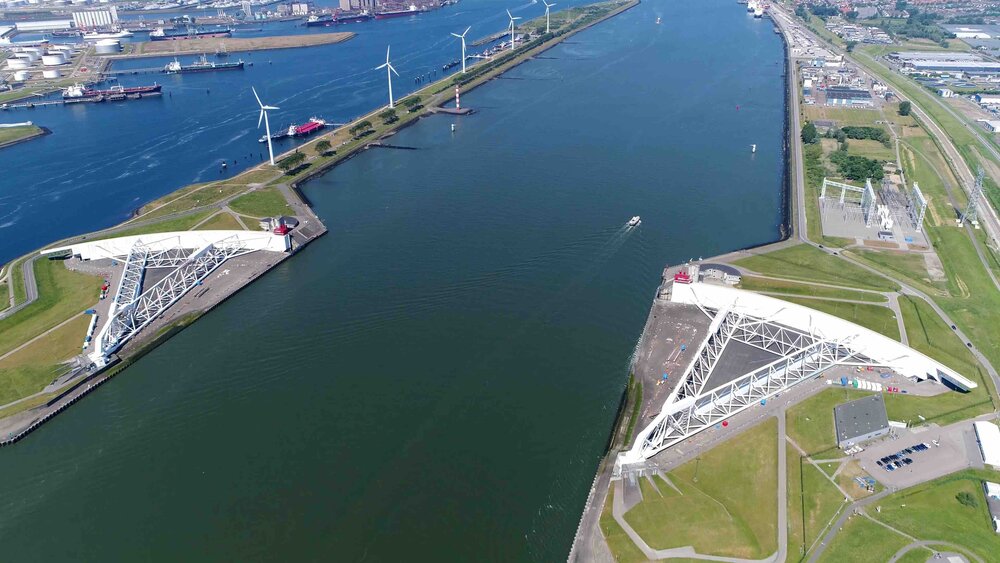 The Dutch are known for the creation of polders. They created fertile lands for agriculture from areas that used to be very wet by surrounding them with dikes and pumping away the water with windmills.

Nowadays, about one-third of the Netherlands is under sea-level, including the three largest cities Amsterdam, Rotterdam, and the Hague. Lima and I visited the lowest point in the Netherlands, which lies in the Zuidplas polder, in my second video of the series. Here, people live 6.76 meters under sea level. The monument shows you how high the sea is above you. Pretty impressive!

The Zuidplas polder in itself is quite impressive too. It was created in 1825 and they used 30 windmills to pump all the water to a ‘ringvaart'. This ‘ringvaart' is a canal around the polder from where the water flows into one of the many rivers nearby. Nowadays all the polders in the Netherlands are kept dry by huge electrical pumping stations instead of windmills.

To get an idea of how the old Dutch landscape looked like, you can visit Kinderdijk near Dordrecht. The mills at Kinderdijk have been on the World Heritage List of UNESCO since 1997. With 19 windmills standing next to and behind each other, it is quite an impressive place to visit! No wonder so many tourists come here from all over the world. 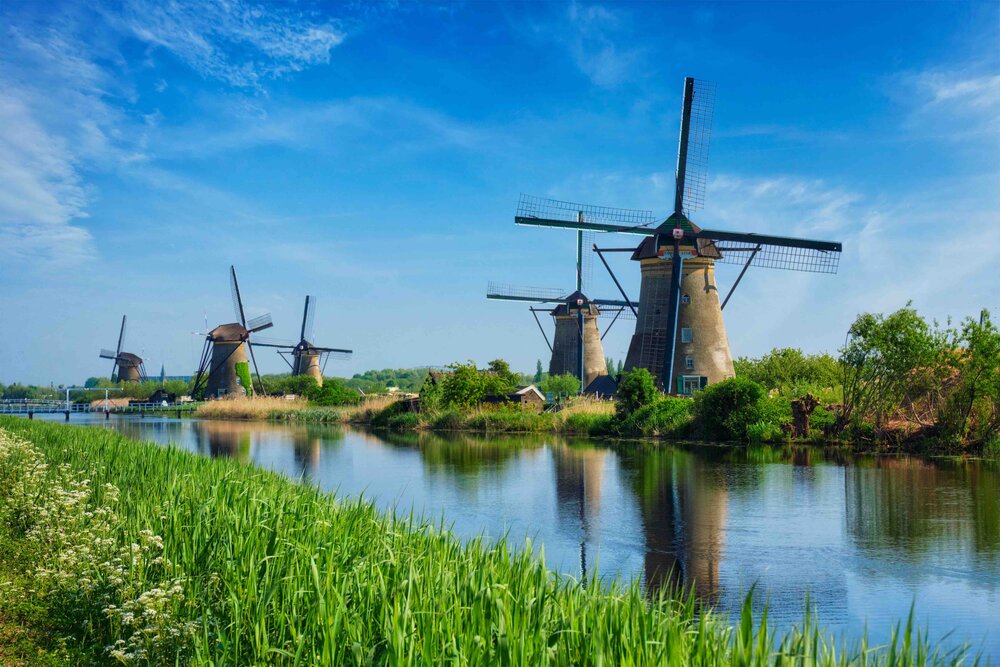 Making good use of wetlands

The Netherlands, meaning lowlands, used to be a wetland. With several European rivers like the Rhine and Waal ending their journey into the sea here.

In the Middle Ages, the Dutch discovered peat, which is an accumulation of partially decayed vegetation or organic matter. It is unique to natural areas called peatlands, bogs, mires, moors, or muskegs. They found out that peat could be used as fuel. It provided more energy than burning wood and became extremely popular in cities for cooking and heating the houses during wintertime. Extracting peat became a huge business in the Netherlands.

But, after the peat was taken away, large lakes were left behind. Some of them are still visible in the Dutch landscape. For instance, in my first video about the Netherlands, I rode with Lima along and across the Loosdrechtse Plassen. From the viewpoint of my drone in the air, the long lines in the lakes that were created when the Dutch contracted the peat, were beautifully visible. Some of these lakes were later turned into polders, so they could be used for agriculture too.

The Dutch not only tried to get rid of the huge amounts of water by creating polders, but they also used it as a defense in war by creating the so-called New Dutch Waterline.

Flooding your country in times of war is considered a Dutch invention. In 1672 the Dutch used water for the first time as a defense system. When the French army came with 120,000 men to invade Holland (Western part of the Netherlands) a wide strip of land was flooded. This way The Hague, the Dutch political center was protected from the French, but also the main trading cities of Amsterdam, Leiden, Delft, Gouda, and Rotterdam could not be reached overland.

This waterline ran past nine cities creating a chain and a system of waterways. All these cities were fortified with a military fortress and beautifully shaped strongholds and earth walls around an urban core. I visited Naarden which was added later to the waterline. 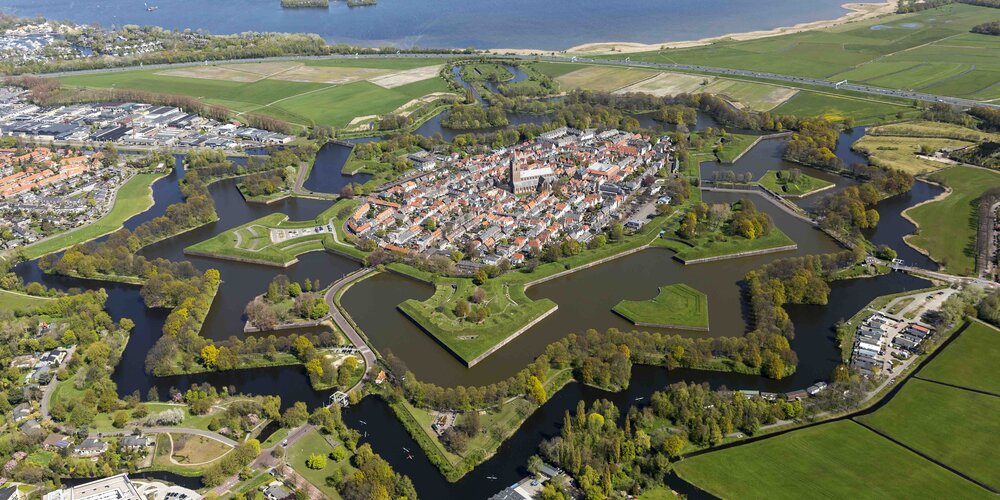 The Dutch built 46 forts for protecting the different water locks, and together with the 5 fortified cities, they formed a network with which the land could be submerged to a depth of 30 to 60 centimeters: too deep for infantry to advance in, and too shallow for boats to enter. This network formed a lake that was 85 kilometers long and about 3.5 kilometers wide.

This new Dutch Waterline was used in 3 different wars. The first time was in 1870 during the French-German War, and later during WWI and WWII. At the beginning of WWII, it became clear that this old technique was not useful anymore. The Germans just flew over the waterline in airplanes and bombed the city of Rotterdam. Shortly after this bombardment, the Dutch surrendered. In my video 75 years of freedom I show you how that bombardment on May 10th, 1940 is still visible in the city of Rotterdam.

WWII - Liberation of the Netherlands

The river Rhine and Waal divide the country in north and south. In order to free the Netherlands and to enter Germany, the allied forces started Operation Market Garden in September 1944. Canadian, Polish, and American airborne troops would take 9 important bridges over the rivers Waal and Rhine, after which ground troops arriving from Belgium could cross the bridges and quickly advance east to enter Germany.

Operation Market Garden failed though. As the allies were not able to cross the Rhine near Arnhem, the liberation was halted and the northern part of the Netherlands had to endure a long cold winter with food shortages. At the Airborne Museum in Oosterbeek, they give more information about the operation and how the soldiers and citizens have experienced those 10 intense days of fighting. In my video 75 years of Freedom, I visited the John S Thompson bridge south of Nijmegen and the John Frost bridge near Arnhem. This last bridge turned out to be the one bridge too far for the allied forces. With a loss of about 8.000 soldiers, the allied forces had to retreat to the southern part of the Netherlands.

In the spring of 1945, the allied forces tried again. This time they were successful. On May 5, 1945, the Netherlands was liberated. 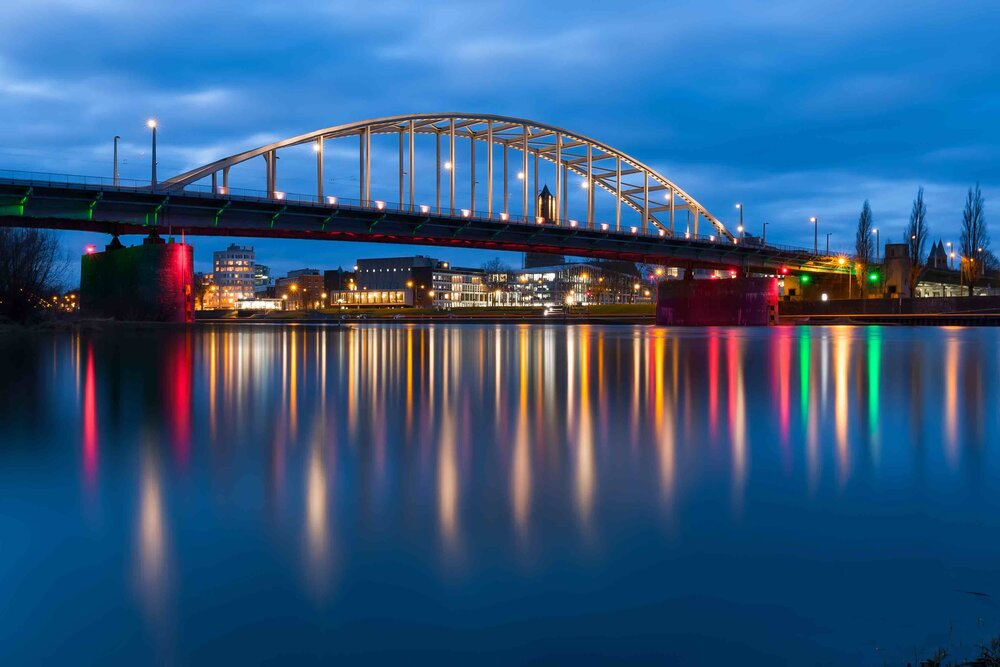 On the first of February in 1953, the Netherlands was hit by an enormous flood. A combination of high tide and a storm that lasted for 12 hours led to multiple dike breaches, and 200,000 hectares of land were flooded. More than 1800 people drowned and about 100,000 people lost their homes and belongings. It was a real disaster.

I met my parents at the Museum Watersnoodramp close to the town Ouwekerk. Here you can see 4 caissons that were used to close the last dike on November 24, 1953. It took so long because the flow rates were so high that initially it was not possible to maneuver the heavy caissons in the right position, but eventually, they managed and the last gap was closed.

Immediately after the flood, the Dutch government decided a change was needed in the way the country was being protected from the sea. In the same year, 1953, the Delta Committee presented the Delta Plan. It was one of the most revolutionary hydraulic engineering projects in the world. A project with only one goal: to prevent a disaster like the one in 1953 from ever happening again.

Motorcycling in the Netherlands

The Netherlands is a country of water and riding your motorbike through the Netherlands means you will be riding over dikes, crossing multiple bridges large and small, and even driving over lakes! It is a unique experience.

In the map below you can find all the places that I have visited when I filmed my video series in The Netherlands related to water.

Watching again Noraly.
Are you going to put "LIMA" in the motorcycle line up? I hope so. Mike