After my off-road adventures in Northern Thailand I arrived in Mae Sariang. A small quiet town with not much to do. But, no matter how badly I wanted to leave that place, I couldn't. I had to stay because it rained almost continuously for three days. Without proper waterproof gear and luggage, I didn't want to risk destroying my electronics. So I had no other option than to sit it out.

From Mae Sariang to the ancient ruins of Sukhothai

One can imagine my excitement when the skies finally cleared and I could ride again. Ready to explore central Thailand! Unfortunately, the recent rains limited my opportunities to venture into some off-road riding. The risk of getting seriously stuck in thick mud again was not what I was up for. Still, I had a hard to fight the temptation, but I knew it was better to stick to tarmac for that day.

One of the perks of traveling alone with your own vehicle is that you can stop anywhere and anytime when you want it. So without the possibility to go offroad, I decided to take in some Thai culture. I spotted a small Buddhist temple on a hill that looked beautiful. I parked my Basanti right next to a washing line with orange monk robes and climbed up the steps towards the temple. There were no other tourists or visitors present at that time and I wondered if this temple would get any at all. From the top, I enjoyed the mountain views. 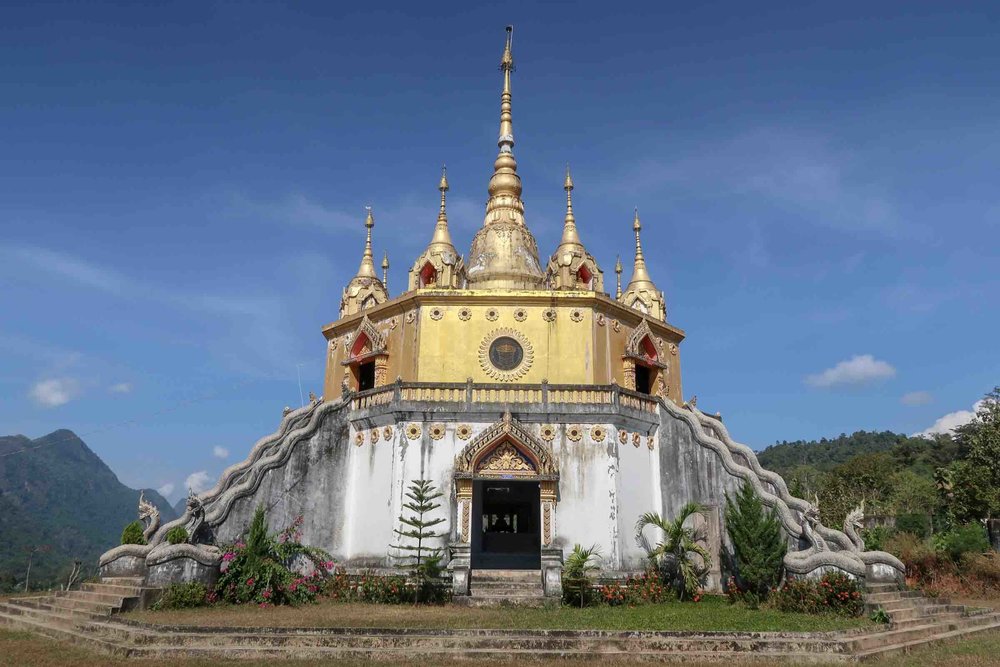 When I tried to find information about this temple, I couldn't even find its location on Google Maps or the internet. I still have no name and no exact location of this lovely temple,  only the memory and the photo above.

Shortly after my visit to the temple, I entered a stretch of extremely boring highway. There wasn't an alternative route possible and in order to reach my destination before dark, I still had to cover quite some distance.

My destination for that day was (new) Sukhothai. This modern town was build only 12 kilometers away from the ancient city of Sukhothai. Sukhothai was the capital of the first kingdom of Siam. Sukhothai literally means “Dawn of Happiness.” This old city was established about 800 years ago. For 120 years, many kings lived and ruled from here. The most memorable monarch during that period was King Ramkhamhaeng the Great. He created the Thai alphabet and established Theravada Buddhism as the state religion. Modern Thailand was born here.

Today, 193 ruins are l scattered over 70 square kilometers and the ancient city is now a UNESCO World Heritage Site. Most visitors explore the ruins by bicycle, but I choose to use my motorcycle! I thought that would be a lot more fun to do.  With just an hour of daylight left, I visited some of the ancient temple ruins. I didn't see all 193 of them, but the ones I managed to see were just incredible.

I didn't hang around in Sukhothai for long. After one night in the local hostel, I put my luggage back on Basanti in the early morning. It was going to be a very long day of cruising through the heart of central Thailand. Not many tourists take their time to travel through this area. Most tourists visit the mountains in the north, explore the temples in Sukhothai and then go straight to Bangkok and the sandy Thai beaches far south.

Central Thailand doesn't have much to offer in terms of big tourist attractions, but it is great to ride through for motorcyclists. I had planned a long route from Sukhothai via Thung Salaeng Luang National Park and Nam Dao National Park. I would end my ride for that day at the edge of the Khao Yai National Park. This route took me past endless fields of flowering plants and rolling hills with magnificent views. Dozens of small trails leading off the main road were there for me to explore and I was treated with a gorgeous sunset upon arrival at Khao Yai National Park.

I had booked my stay at the Baan Pordee Homestay the night before. This homestay turned out to be a great place to stay. Located so close to the Khao Yai National park, it was surrounded by an abundance of jungle and bird sounds. The hosts were also extremely friendly and I stayed in a spacious cottage with Basanti parked safely next to it. I couldn't have been happier! I would've loved to stay longer, but because of my delay in Mae Sariang, I was more eager to ride than to stay at Baan Pordee Homestay.

Twenty minutes after I left the Baan Pordee Homestay, I reached the Khao Yai National Park entrance gate. My plan was to ride straight through the National Park and continue to  Ayutthaya after that. When I tried to pay for the entrance ticket, one of the park rangers pointed at my motorcycle exhaust and said: “check for sound first”.

I was a  bit confused about what they were going to do. The park rangers instructed me to park Basanti next to the park's entrance. Immediately they came with a sound measurement device to test the sound coming from my Royal Enfield. I always try to expect the unexpected, but this test took me by surprise. Most of all, I didn't expect to pass it!. The first thing I did when I bought my motorbike was to change the stock silencer for a very noisy Gursewak exhaust. There was no way this exhaust would be within the noise limits!

The distance between the exhaust and the sound measurement device was carefully determined and they instructed me to rev up the engine to 4000 rpm. It took some time for them to measure the sound produced by Basanti, but suddenly, and unexpectedly, I got an OK. I was allowed to ride through the park. I was very happy about that! At the same time, I  would have understood completely if they'd refused me to enter. This national park is full of wildlife, including wild elephants. In the end, I paid for my entrance ticket and entered Khao Yai National Park!

I secretly hoped to see a wild elephant along the way, but given my noisy bike, I wasn't surprised that I didn't see one. I only noticed a spot on the road that had undoubtedly been used as a toilet by an elephant. That was all of the elephant action I got to experience that day.

The highlight of my ride through the Khao Yai National Park was the Haew Narok Waterfall. This waterfall consists of three drops that, when combined, are 150 meters in height. To reach the waterfall, I followed a one-kilometer trail down the hill. From the viewpoint, you can only see one of the three water drops which was still about 50 meters in height and impressive. I wasn't too happy when I had to walk up again as I had taken my helmet with me and wore my full motor outfit. It became a very sweaty climb. Although the parking lot was probably safe, I didn't feel comfortable leaving my helmet and clothes behind unguarded. That is why I ended up dragging it along with me. 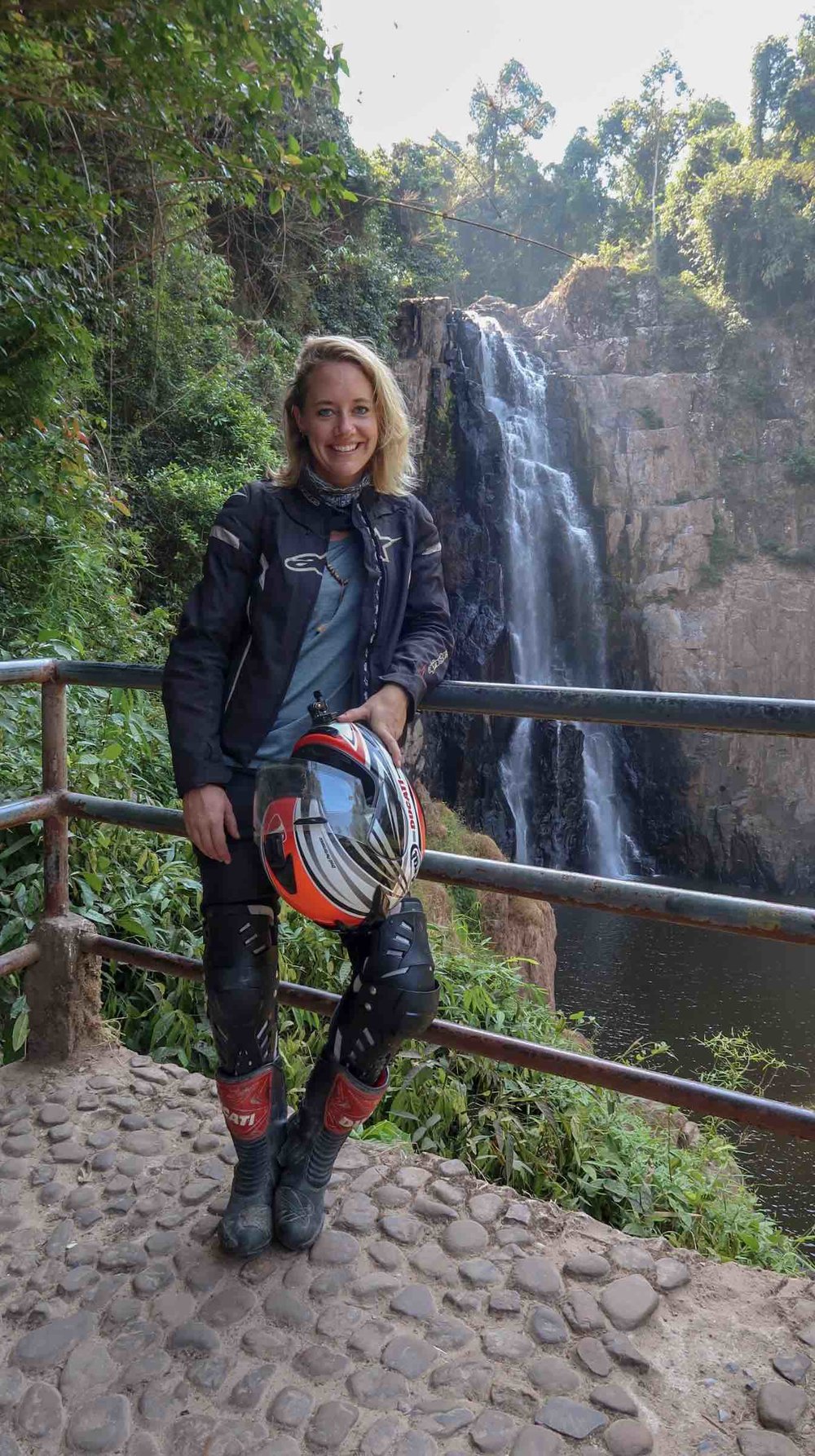 Hiking to the Haew narok waterfall in full riding gear…

Sweaty, but happy after my waterfall visit, I continued my ride to Ayutthaya. This city, only 80 kilometers north of Bangkok, was the second capital of Siam after Sukhothai. It was founded in 1350 but was destroyed by the Burmese army in 1767. They burned the city down and forced the people to leave. It has never been rebuilt since and therefore remains known today as an archaeological site.

Visiting this site was a completely different experience than my visit to Sukhothai. Located so close to Bangkok, these temples are completely overrun by tourists. Dozens of elephants carry tourists around the ruins, restaurants serve mainly western food, and massage salons and tourist information centers are everywhere. With my recent visit to Sukhothai in mind, I didn't like to be in Ayutthaya. I was very happy to leave again the next morning.

Leaving Ayutthaya meant I was up for a massive change. From the ancient temples full of history, I would ride into Bangkok, a cosmopolitan megacity and the current capital of Thailand. With its 8 million people living there, it was the first big metropolis I rode into since I left Delhi in India.

But before I entered Bangkok, I made a mistake without knowing it. Because I use Google Maps as my navigation, I drove straight onto the motorway. It turns out that motorcycles are not allowed on the motorways leading into Bangkok. So, when I rocked up at a toll booth, I noticed a slight panic in the eyes of the officers working there. They couldn't let me turn back and officially they were not allowed to let me pass either. We reached an impasse. Eventually they let me through with the instruction to take the first exit. It kind of messed up my planned route and it took me a lot longer to reach Bangkok, but eventually I made it!

I visited Bangkok several times before but I had only used public transport then. Now I was entering the city on my Basanti. Conclusion? Riding through a city like Bangkok by yourself on a motorbike is a ‘slightly' different experience from traveling through the city by public transport. Still, it wasn't by far as difficult as I imagined it to be.

I guess that when you start your motorcycle journey in Delhi, India, any other city that you enter will be considered mellow!