Via social media I got in touch with Marta and Lukas who are traveling around the world on their motorcycles. They have had an amazing journey so far, so it's time to ask them 10 questions about their adventure! 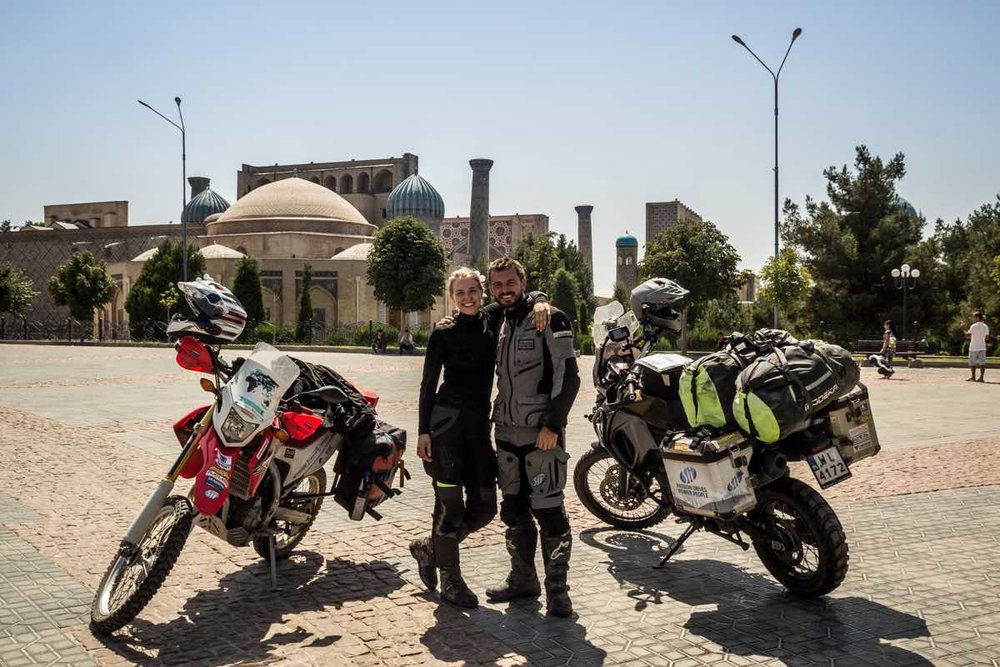 Could you tell me a little bit about yourselves and your motorcycle journey?

Hey! We are Marta and Lukas travelling on our bikes from Poland to New Zealand. We called our project Dream Catchers' Journey as this is something that we have dreamt of for a long time! We set out from Warsaw in June 2018 and headed south through Slovakia, Hungary, Romania, Serbia, Macedonia and Greece to Turkey.

Then, from Turkey we moved east, travelled through the Caucasus mountains in Georgia, Azerbaijan, then Iran, Turkmenistan and the few of the “stans” more – Uzbekistan, Tajikistan, and Kyrgyzstan. From there, along with a group of travellers with whom we shared the costs of a Chinese guide, we entered China, and went through the famous Khunjerab Pass to Pakistan. After Pakistan, the time came for India, Nepal, a small part of India again, this time the eastern part to Myanmar.

From Myanmar we entered Thailand, then we went to Laos, from Laos to Thailand again and finally we arrived to Malaysia. Couple of weeks ago we reached Indonesian Sumatra, so now we are exploring the beauty of Indonesian Islands.

You are both riding on different bikes, a Honda CRF 250L and a BMW F 800 GS. What can you tell me about the difference in performance while off-road riding?

Lukas: Of course there is much difference in performance of both bikes but that doesn't really matter. Long term journey is not a race or competition. You should ride always at 60-70 % of yours and your bike capabilities to make a safe return to your home. BMW F800 GS in Adventure specification is almost ready for a journey after purchase.

We had to do some modification to Honda as this is more trail bike, for riding around your home, so we needed to adapt it to longer distance travels. We ride on different bikes because the initial plan was to ride 2up. After Marta discovered how huge difference is between driver and pillion experiences she wanted to do it on her own bike. We already had new BMW at that time so it would be silly to sell it.

We bought Honda CRF250L for Marta as this is small, light and reliable bike which already had history in different journeys around the world. The lighter bike the better, especially in off-road riding and especially when you are just starting your adventure with off-road.

Marta: Here is an anecdote, in Pakistan Lukas together with our friend Willi, who also rides the same GS as Lukas, decided to go to the Shimshal valley. It is a very difficult and demanding off road route, I decided to stay "at home" because I did not feel strong enough.

I suggested that "if you guys want, one of you can borrow my motorcycle" and then Willi said that "no way, it would not be fair and too easy for one of them" :D So as you see even experienced bikers travelling on big and heavy bikes sometimes wish to have something smaller and lighter. 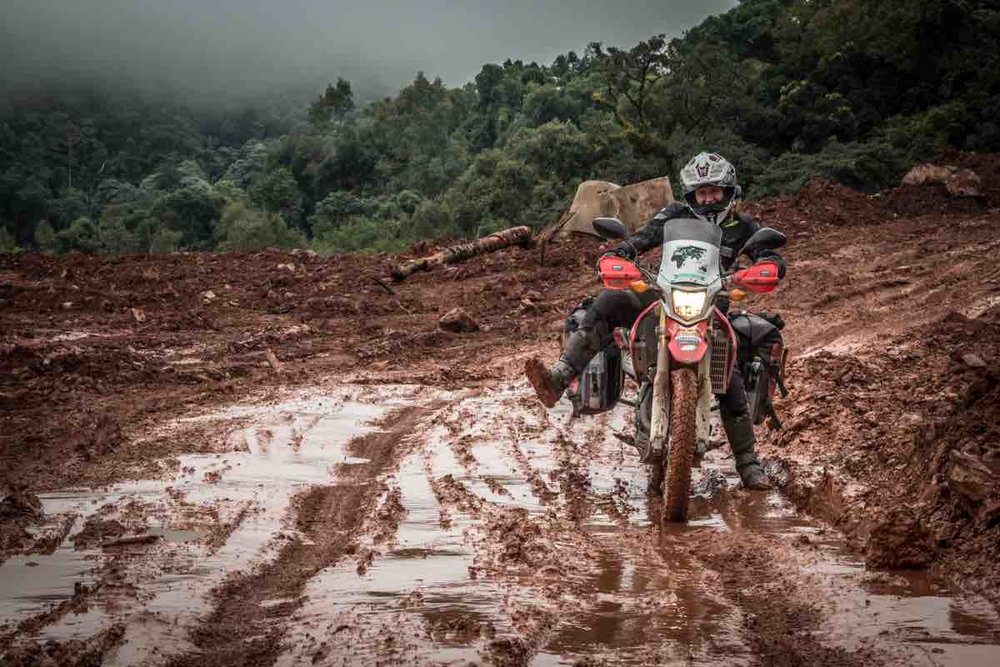 Did you face any serious bike breakdowns on the way? If so, how did you solve the problem?

Lukas: No, not rally. We do basic maintenance when it's time for that. Both bikes also had bike service jobs in Thailand and Malaysia after half way of our trip. Marta had a small crash in Pakistan so we additionally had to replace some broken parts.

What was the best unexpected event that happened on this journey?

Marta: The best unexpected event during our journey was... finding Lucky. Here is a story.

Our first day in Kyrgyzstan. We were exhausted with altitude sickness, which caught us on the last day in Tajikistan. We were hoping to get to Osh as soon as possible and have a few days of rest... but as they say "Tell God about your plans and let him laugh"! 50 km before Osh in the middle of the road we found a puppy hit by the car. It really wanted to escape from the road, but it could not, because of two broken hind legs.

We packed her (she was a female puppy, what we discovered later) into a tankbag with the intention of finding help for her in a city. We called her Lucky, what is quite obvious, considering the circumstances. And this is how it began. To say that it was hard, it's like saying nothing.

Kyrgyzstan is a different world, practically no one cares about dogs in that country. For almost a month we were struggling for her life, we had to find a vet, who would carry out surgery so that she could walk again and, what was even more difficult, find a new home for her. I remember that once after her surgery, which ended late evening, we had to hold her in our hands for 12 hours to make sure that she wouldn't be walking by herself. 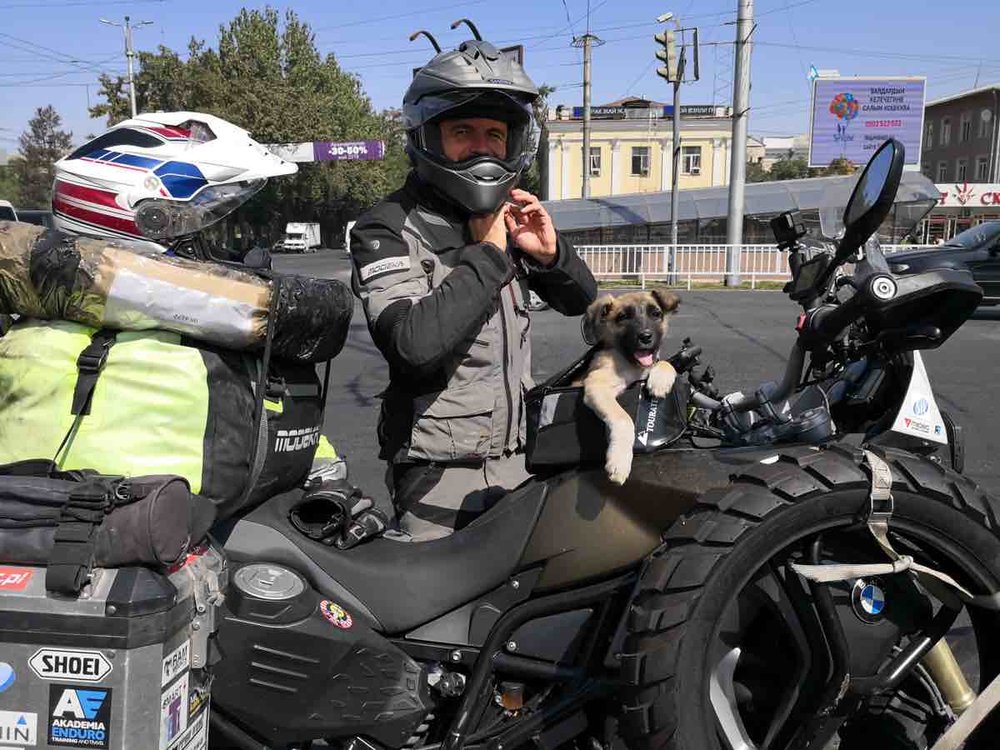 It was funny, because when Lukas was holding her, she slept, when we changed and I was holding her she wanted to do everything, except sleeping and letting me sleep. Long story short, LUCKILY everything ended up well :D From time perspective, finding her was one of the best things that happened to us.

And it's not like we take every puppy we see on the street along the way. However, to be honest, most of the dogs and puppies we usually see on a street ARE able to walk. That time, when we saw this little "bundle of misery and misfortune" ... that view touched us very deeply.

We did not expect that helping Lucky would be such a difficult long-term project, because in our case this one month in Kyrgyzstan meant giving up Kazakhstan, Russia and Mongolia... but watching her transformation from "is she still alive?" to happy, regular, vivid puppy was worth every sleepless night and every effort.

What would you pick as the most essential item to bring along on a round the world motorcycle journey?

Marta: You must be kidding me! I would say, spare tubes because we had already 6 punctures along the way! 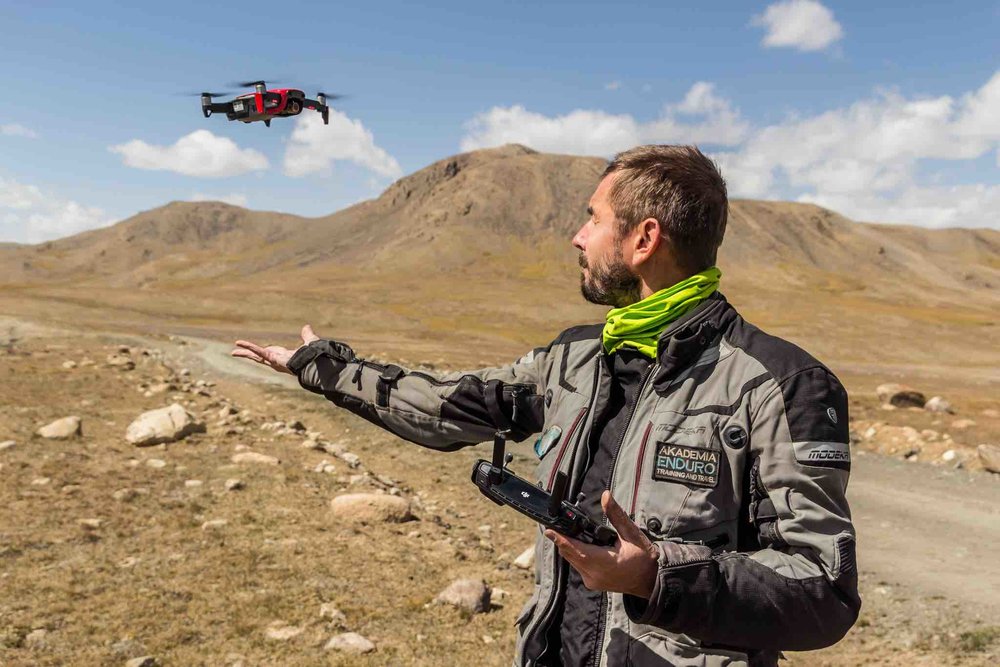 Lukas has been on other round the world motorcycle trips before, which continent did you like best for motorcycle adventures?

Lukas: With no doubt Central Asia. That is why we decided to go this way this time. I love the atmosphere of ancient Silk Road cities and also remote and challenging routes in mountains of Tajikistan and Kyrgyzstan.

What was the most challenging part of your travels so far?

Lukas: We have been asked this question at least several times and we used to respond in the same way- Bartang Valley. For those, who have no idea about this Valley, quick explanation. It is a rather wild and abandoned area in Tajikistan, with few people living in small villages located a dozen or more kilometres from each other.

The route we took from the town of Rushon to Karakul involved riding about 350 km off road, with numerous crossings through rivers and other surprises, like loose stones, mud, sand, steep uphill climbs and downhills etc. If you add the altitude sickness that both of us had, you'll receive a quite challenge.

Marta: However, it was several months ago... Right now, I think we are facing the bigger problem and the most challenging part have started just now. We called it long term tiredness. It is both, mental and physical. We have been travelling intensively for 9 months. It's a lot of time. Many things happen every day, you know it, e.g. you have to ride in crazy traffic, find a food, find a place to sleep, deal with people that want to rip you off, use ugly, dirty toilets, plan the next steps, because it's a lot of logistic!

Additionally, your body is getting weaker and weaker, you are not as fit as you used to be before the journey. All of these things make you feel just bad and tired, but there's not much you can do about it. Therefore, working on our attitude and reminding ourselves that this is our dream, time of our lives...this is something really important. 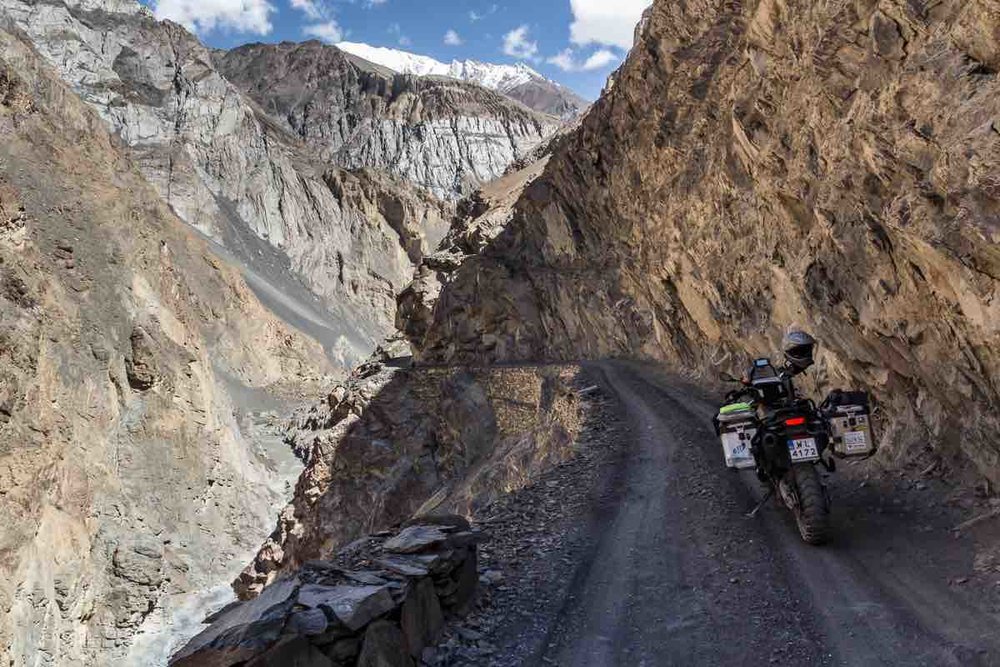 What was the most essential planning that you did upfront?

Lukas: Studying maps and choosing the most interesting routes. That took me a lot of time but was also great fun when we still were at home. I have also looked for some current information about these routes on other travellers blogs.

Do you have any motorcycle plans after you reach New Zealand?

Marta: Well, yes! We are planning to ship our bikes from Indonesia to New Zealand, and after New Zealand go to Australia. This is because of the weather condition in NZ. We have heard from NZ bikers that April is still OK, when it's comes to riding, May is unpredictable, but June is almost impossible. This is why, we want to visit NZ first, even if it's easier, cheaper and more...let's say obvious to ship the bikes from Indonesia to Australia.

From Australia our way home will not be straight neither! We would like to come back to India, just to visit Ladakh as we had to skip it when we were in India in September 2018. The reason we had to let go that time was heavy snow falls in that area.

We are still considering the options, either to send our bikes from Australia to Nepal and then go to India or maybe it's better to ship the bikes to Europe, go with a plane to India and rent up there the Royal Enfields, which also would be cool! 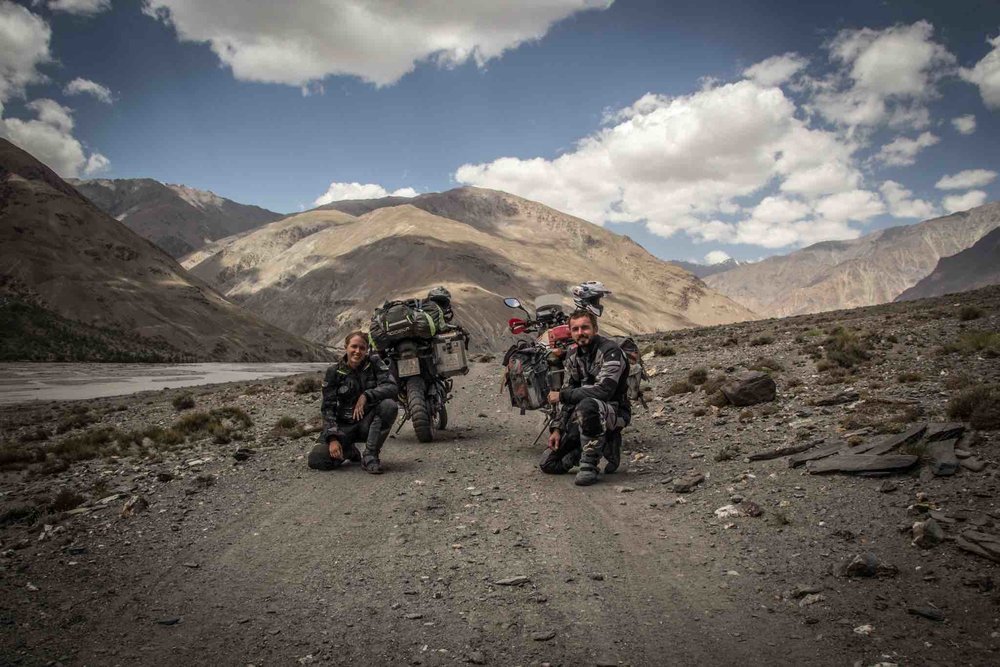 After Bangkok exploring bea... Riding from ancient to mode...