Exploring Northern Thailand had been on my list for several years. In previous years I had visited Bangkok, learned how to dive in Ko Tao, and partied on gorgeous beaches in the south of Thailand. But I had never been to the northern region of Thailand.

When I realized that I would cross the Myanmar-Thailand border in the north of Thailand, I was stoked. Finally I could visit this region. And then the inevitable happened, I got disappointed.

Since I started my motorbike journey, I became more focused on the journey itself instead of the destination. On my previous travels, it was all about the destination. Upon arrival in a new place, I would vigorously see all the sights and do all the must-do activities in that area.

Traveling by motorbike changed my attitude towards traveling completely. I was no longer interested in visiting sights and doing excursions. Instead, I started to look for beautiful roads and riding through remote areas unreachable by public transport.

That is why I got disappointed when I rode from the Myanmar border to Chiang Rai, and later on to Chiang Mai. The road between these cities was in impeccable condition. It was smooth, wide, and with brand-new tarmac. The views were a lot less majestic than I had expected, and there was a lot more traffic compared to the roads in Myanmar. When riding, I barely switched on my GoPro to record something.

The hot spring that I spotted on my way to Chiang Mai was the most interesting sight of the day, and the people boiling eggs in it, made me laugh! 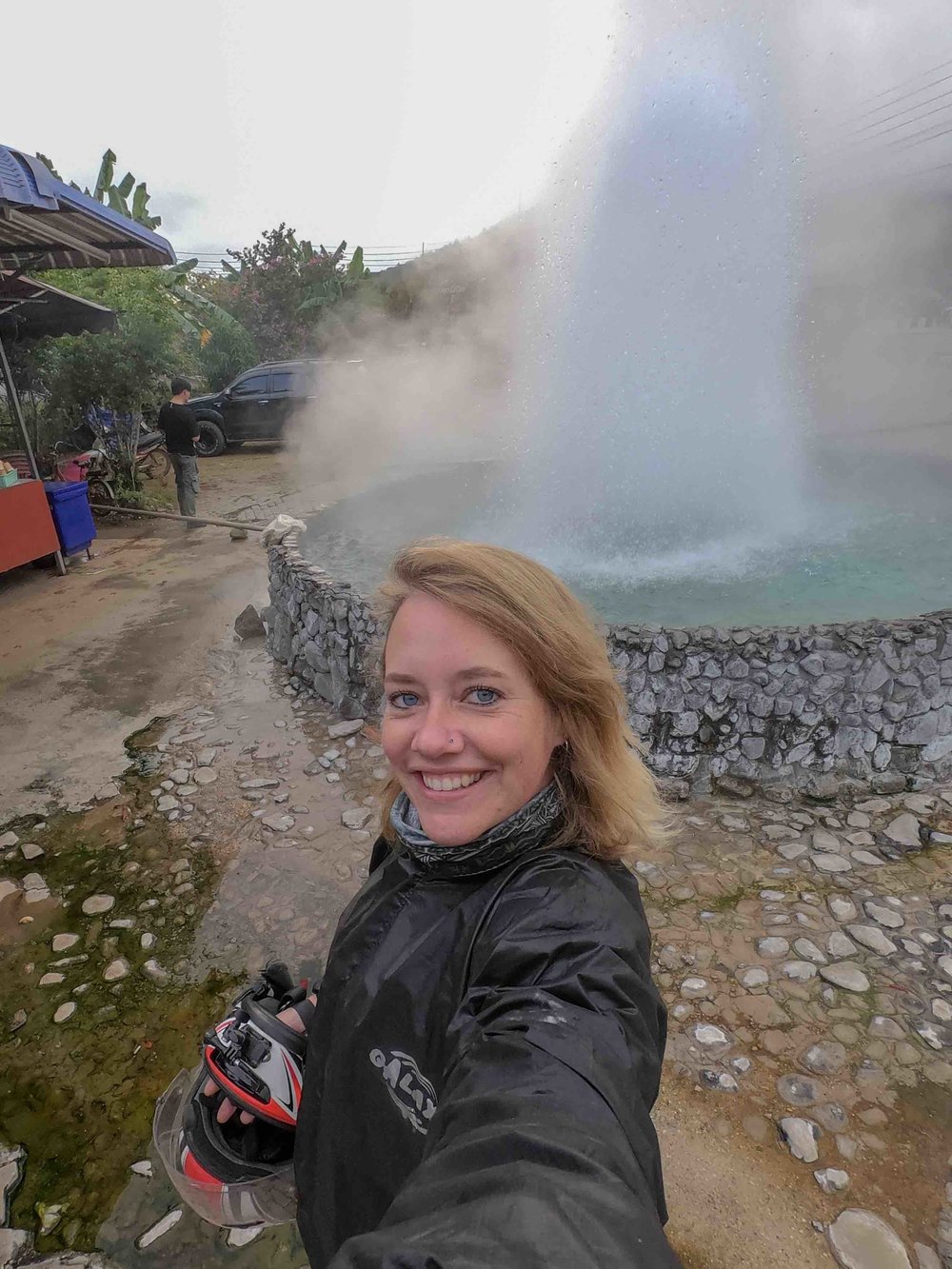 My time in Chiang Mai was mostly spent on getting my bike serviced and shopping for better motorbike gear. I also rode around Chiang Mai with the local biker group that I had met there. After spending New Year's Eve in Chang Mai, I left for Pai. The first hour, I rode again on a smooth and wide tarmac highway with nothing interesting to see along the way.

Something needed to change, so I decided to step up my game. Maybe I should approach my riding differently in order to see the real beauty of Thailand. I stopped, checked Google Maps, and chose the first small side road that I saw on the map. It turned out to be the best decision of that day.

Soon after taking this road, I noticed a small sign on the side of the road saying: Elephant Retirement Park. I took the turn and rode down a short gravel path to a big house. Immediately, the owner came out to greet me. He couldn't believe I rode my bike all the way from India to his house!

I chatted for some time with him and he talked about how he started this Elephant Retirement Park. He had been rescuing elephants for many years now. Most of the elephants had worked in the logging industry or carried tourists around. In his park, they get a chance to enjoy a peaceful retirement. He also started a breeding program, so there were 3 little baby elephants trotting around on his terrain.

After lunch, I continued riding to Pai on a dirt track past rice paddies and through some jungle. This gave me the taste for the excellent off-roading opportunities in Thailand!

Going off the beaten track

When I rode on terrible roads in India, I was hoping for better roads. When I was riding on the smooth tarmac in Thailand, I wanted to be on difficult, horrible roads again. I am impossible!

To escape the gorgeous, smooth, and open wide highways of Thailand, I started venturing off the main roads. Most of the time it turned out to be a success, like when riding to Pai. But not always.

The road from Pai to Mae Sariang is known for its hundreds of curves. But, I was tipped that there would be a bamboo bridge in about a half-hour ride in the other direction. After visiting the bamboo bridge, which was magnificent by the way, I checked Google Maps again. And what did I notice? That's right, a shortcut!

Instead of going back the same way, I could cut off a large part of the highway and go off-road. That was like music to my ears, so I took off in that direction. It started okay. The road was paved and wide. It then turned into a paved and narrow road. Then, the road became unpaved and narrow. Until, in the end, it could hardly qualify as a road anymore.

The most difficult thing were the deep tire tracks of probably pickup trucks that had ridden here during the rainy season. The tracks made my bike fly all over the place until the inevitable happened. It was an almost crash to be honest, as I could stop the bike in time. But, my back wheel got stuck in one of the deep tracks and would not move a single inch anymore. After several minutes of trying to get loose, I decided that I needed to get off my bike. It only lasted a split second that I lost control over the bike, but there she went, to the ground!

There was not a single soul in sight so I couldn't ask for any help get her back up. I took off all my luggage and with all my strength (and sweat), I managed to get her back up. Getting the bike out of the deep track took another several more minutes of pushing, pulling, and sweating - but I did it!

The road became even more tricky after this incident and though there were a few close calls, I didn't drop Basanti again. I have to admit that after more than 50 kilometers of plowing through mud and taking huge bumps, I was quite happy to see some tarmac again.

At the end of the day, I inspected the damage. The knuckle guard had broken, the steering wheel was loose and my brake pads were squeaky. All in all not too bad. The knuckle guards were made of plastic so breaking it didn't come to me as a surprise, the steering wheel was easily tightened again and the brake pads only needed to be cleaned. After that, I was all set for some new adventures in Thailand, bring it on!

How to buy a motorcycle in ... Riding through Myanmar on m...

Sounds like a burst of adrenaline and boost of confidence when you conquered made for a wonderful experience for your first time off-road. I find that traveling the roads least traveled are often more scenic either on or off-road. My first experience riding off-road was in Belize, it was so exhilarating that I sold my cruiser bike for a dual sport and wondered why it took so long to figure that out. Having a wildlife resource degree I always look for routes in the Eastern United States surrounding all the green stuff on the maps because they usually have wildlife and beautiful scapes. Being new to dual sport riding I am expecting to take many falls to get to those areas. They make for the best stories and growth! Thanks for giving me inspiration!!

Hi Viv, great to see that you are also reading some of my older blogs :-)!