Riding through Myanmar on my Royal Enfield

In 2011, I visited Myanmar for the first time. It became my favorite country in Southeast Asia. Friendly locals, stunning nature, and magnificent sights, Myanmar had it all.

I was looking forward to traveling through Myanmar again and see the changes it had gone through. Some things hadn't changed though. Riding independently through Myanmar by motorbike was still impossible. A government official and a government-approved guide must be on your side continuously while traveling through Myanmar. A very expensive arrangement that obliges you to team up with other travelers in order to split the costs. I have never been a person that enjoyed traveling in a group. I only join tours when I have no other option.

Needless to say I was dreading riding in a group and following a governmental SUV all day.

The night before entering Myanmar, I met all the other riders in Moreh. There, in the last town on the Indian side of the border, we enjoyed dinner while getting to know each other. We exchanged many road stories.

The group consisted of two Spaniards, each riding a BMW GS 800, two Swedes, riding a 125cc Honda Grom and a 250cc Honda CRF, two Austrians on a Suzuki V-strom 1000, two Russians on a Honda VFR sports bike, and myself riding the RE Himalayan 411 cc.

It was a pretty straightforward affair at the border. An exit-stamp in my passport and an exit stamp on the Carnet-de-Passage for those riding with a foreign license plate. I didn't need an exit stamp in my Carnet-de Passage, as I was riding an Indian motorcycle.  After we received the stamps, we had to wait for another official. He had to inspect our motorbikes before we could ride them into Myanmar. Of course, he wasn't present at that time.

It took more than 2 hours before the official showed up, but soon after that we were allowed to leave India. It took only a few seconds to cross the India-Myanmar friendship bridge and then we were on Myanmar territory. On the Myanmar side of the border, the procedures went a lot smoother. I had my visa for Myanmar already in my passport, so it was a matter of getting a stamp, riding 2 minutes to the customs office for the Carnet stamp - and DONE!

Perhaps I'm making this sound very easy, but in fact, I was incredibly relieved when I got my Carnet stamped and signed back from the officer without a hassle. It was my first border crossing with my dear Basanti and even though I thought I had all the right papers with me, I wasn't 100% sure. The possibility of being denied access and having to ride back to Delhi to arrange more paperwork had always lingered in the back of my mind.

I traveled through Myanmar with Osuga Myanmar Travels. Their guide gave every rider a local sim card with data for internet usage. It was a brilliant idea. For the next 6 days, we could ride independently and send our live location to the WhatsApp group several times per day. A perfect solution, with the Myanmar guide and government official being able to keep track of us, and we in return didn't have to ride behind a car all day.

But other than that, we could ride on our own which I preferred to do most days. Except for one day, that day I rode together with Peter & Claudia from Roadsup. With more than 24.000 kilometers completed on their trip, Peter was a very experienced and excellent rider. I took the opportunity to ride behind him to follow his riding lines and learned a lot by doing so.

Exploring the ruins of Bagan

I usually don't visit the same place twice but when I found out that our route went via Bagan, I was more than happy to see it again. Bagan is a stunning place that I explored throughly during my first visit to Myanmar. At that time I traveled by bicycle.

Bagan was the capital of the Pagan Kingdom from the 9th until 13th century. During this time, over 10,000 buddhist temples, monasteries and pagodas were built on the plains around Bagan. Today, the remains of 2,200 temples are still standing tall. Partly overgrown and some only accessible via narrow trails, these temples just ooze history.

But the ride from Kalaw to Bagan was 9-hours and I knew that exploring the temples would take time too as there are so many of them scattered around. The entire day felt like a rat-race. I was constantly looking at the remaining riding distance, riding time and the position of the sun. I had to make it to Bagan well before sunset to see some of the temples!

Luckily I was able to spot some of its temples. When I arrived there, it was still 45-minutes before sunset and the lighting was perfect. I didn't have time to figure out where the ‘best' temples were, so I just rode randomly along narrow and sandy trails. I wasn't disappointed. Even though my time was limited, I still enjoyed exploring the area more than last time, simply because I got to do it on a motorbike this time!

The floating mountains of Shan State

On the last full day of riding before crossing the border into Thailand, we rode through Shan State. This state in Myanmar borders China to the north, Laos to the east, and Thailand to the south. The Shan people have been fighting for independence for decades and there is still a guerrilla war against the Burmese army going on.

Security in this area is therefore tight. Our guide had to show the group permit at several checkpoints which we had to pass as a group. But after each checkpoint, there were no signs of military or unrest. We got to see some of the best scenery of the entire trip through Myanmar here in this region. 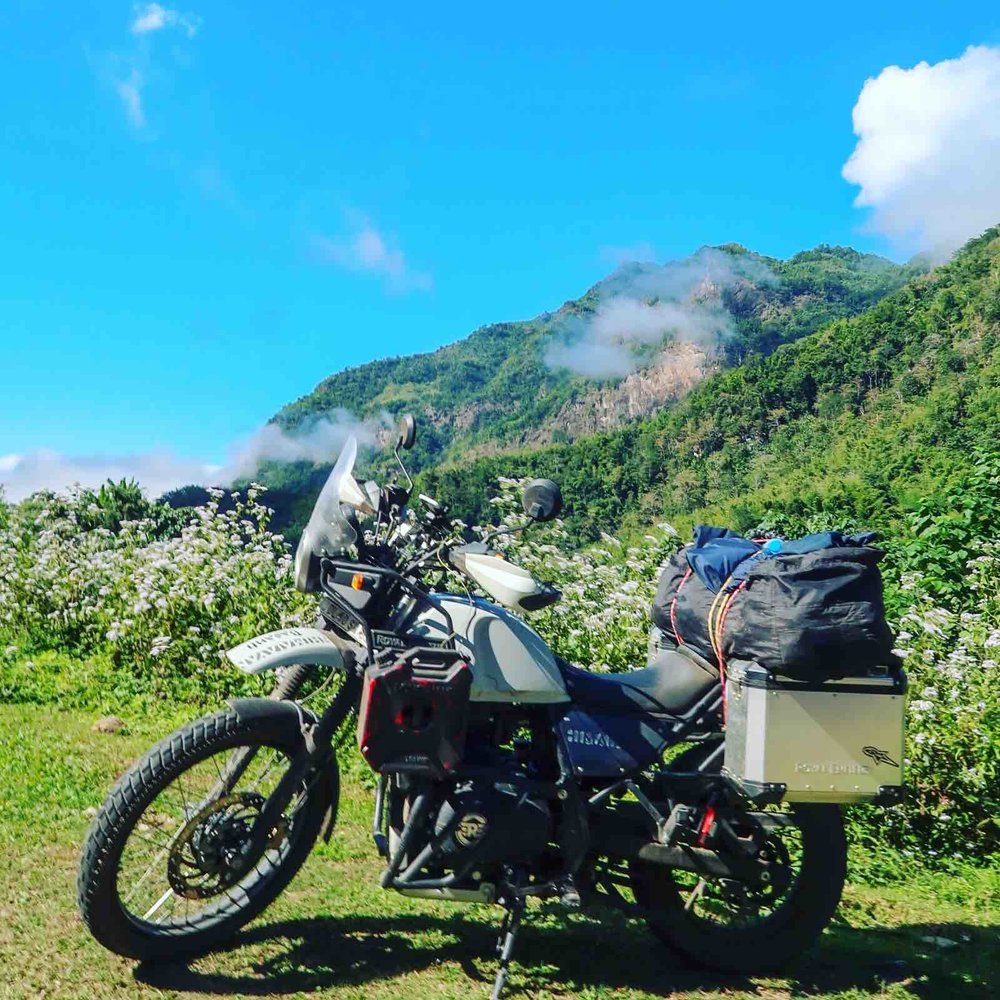 The mountains in this area were mysteriously covered in low-hanging clouds and they reminded me of the floating mountains from the Avatar-movie. The road was narrow at times but in good condition. Winding itself through the mountains, past little creeks and rivers, and to the top of the mountains where stunning and wide-open views were revealed: this was fantastic riding!

It was the longest day of the 6-days crossing through Myanmar and I was tired at the end of it. But the incredible views gave me such energy that it hardly felt like I'd been riding for over 10 hours that day!

And then, just like that,  I had reached the border with Thailand. The border crossing here was a tenfold more hectic than the India-Myanmar border crossing. It was busy with cars and people and felt disorganized. We were only the third group of foreigners to pass through this particular border crossing.

The Myanmar agencies organizing this kind of group travels normally use the border points in the south of Myanmar. The officials on this more northern border crossing were still a bit inexperienced with the procedures.

We were sent from one office to the other. We had to fill out different forms, make copies, and come back to another office. My Carnet-de-Passage contains my name and the name of the Indian national on whose name my motorbike is registered. This obviously caused some confusion with the Thai official handling my paperwork.

My fellow riders, who'd done already a dozen of border crossings, told me that this was the first time that their chassis and engine numbers were checked against the registration papers. In the end, I received my Carnet back, all stamped and signed.

Unfortunately, the officials only gave me a 30-day permission on my Carnet. Immigration also gave me a 30-day visa, but I can easily extend that if I wanted to stay longer in Thailand. But the stamp on my Carnet is not so easy to extend, so it means I only have 30 days to ride through Thailand to the border with Malaysia. Definitely doable, but I was hoping to have some beach relaxing time here in Thailand. That is not going to happen this time!

A small setback compared to the fact that I managed to get into Thailand without having to ride with a guided escort! Thailand introduced the same rule as Myanmar several years ago and it has given many overlanding motorcyclists massive headaches. The high cost of traveling with a guided escort made many riders seek alternative routes and avoid Thailand.

It is likely that someday the rule of having a guided escort will also be reinforced again at the border crossing that we used. For now, I was glad and lucky that the officials did not insist on an escort and let me into Thailand by myself. I was absolutely stoked, I could ride independently again! I can choose my own accommodation, have rest days whenever I want to, and not pay for somebody to guide me through a country that is not difficult to navigate through.

Overall, the experience of riding with a guided tour through Myanmar was much better than I anticipated. I have to admit that I even got to appreciate having the accommodation pre-booked for me. Not having to think about where to stay every day saved me energy. Energy, which I now could put into enjoying my travels through Myanmar, enjoying the scenery, and taking in the local culture.

Traveling in a group actually resulted in new friendships with people that share the same passion for motorcycle travel as I do. It also gave me the opportunity to learn from other riders and exchange stories and tips with them. In the end, crossing through Myanmar in 6 days with a group was a big success!