Stories from the road India
5 January 2019

I can't even remember why I was so determined to ride to Nagaland, one of India's Northeastern States. Perhaps it was just the name. To me, Nagaland sounded like a combination of Alice in Wonderland and Narnia. This just HAD to be a great place.

People I ask me how I plan my route and which roads I choose to ride. Let me give you an idea of the process. I am in Shillong. I type ‘Kohima', the main town of Nagaland, in on my Google Maps app. Google Maps shows me the fastest route to this town which is a 12-hours ride. Because that is too far for one day, I then search for a town located at about 6 hours riding from Shillong on this route. That happened to be Lanka.

So Lanka it was. Riding to Lanka from Shillong meant going straight through the jungle of Assam, yet another state in India. I followed a small road without any traffic winding through the jungle. Large parts were unpaved and required serious off-road riding.

On the way, I passed several small villages where the people who heard me coming were literally eye-balling me. It seemed that I was quite a sight. A large motorbike, a foreigner, and a woman. These three ingredients combined, made that they could not believe their eyes.

I was so used to finding small shops alongside the road whenever I rode in India that I never carried a water bottle with me. A habit that I started to regret when riding this route. The sun was soaring, my throat got drier and drier, and there was not a single shop in sight. When I spotted a bamboo construction with mountain water, I took the opportunity. It was some of the most delicious and clear water I ever drank in India!

When I reached Lanka after some 6 hours of riding, it became clear that Lanka was not a traveler hub. It was a scruffy little town and the accommodation matched that image. But although the room was not great and situated right next to a Hare Krishna temple with hours of loud Hare Krishna chanting, the manager was so kind to let me park Basanti inside next to the reception desk. I didn't have to worry about Basanti spending the night on the streets!

After spending one night in Lanka, I backed Basanti out of the reception area and took off towards Kohima. The day started off quite alright, but as soon as I crossed the state border into Nagaland things changed for the worse.

The main road was still under construction, being unpaved, extremely dusty, and bumpy. I got several terrible dust showers while riding behind big trucks and could barely see where I was going. I was relieved I didn't dive off some cliff somewhere. 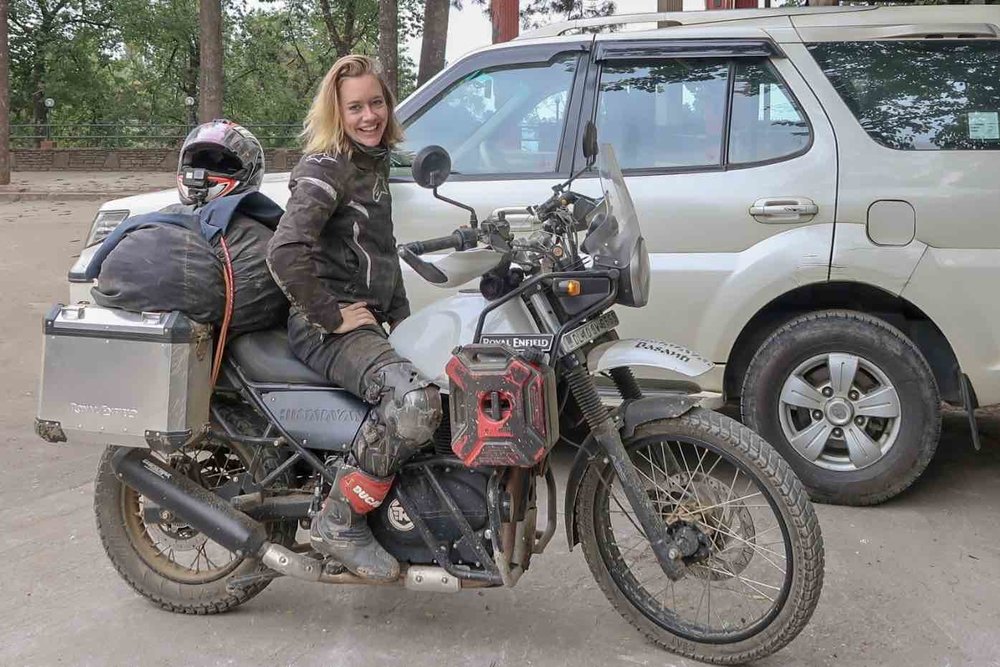 As if the road towards Nagaland wasn't bad enough, getting out of Nagaland and into Manipur turned out to be even worse! Upon my arrival in Kohima, it started to rain. The rain didn't stop for another 24 hours. Thinking about what this was doing to the roads, I didn't want to leave Kohima yet. But I didn't have much choice.

The guesthouse where I stayed was shutting down for winter maintenance. They couldn't host me for another night. It was possible to move to another guesthouse within Kohima, but packing and unpacking all my belonging again for a 5-minute ride did not appeal to me either…

I chose to give it a try and see whether the roads were still accessible. It turned out the be the hardest day of riding so far. For hours and hours on end, I plowed through mud, sand, water, and potholes. I had to be one hundred percent focused all the time. One single moment of drifting off could mean slipping and sliding down a steep drop.

Perhaps it was my lack of experience in riding roads like these, but I was riding so tensely and concentrated that I could barely move my shoulders when I finally reached Imphal by the end of the day. Each and every muscle in my back was squeezed intensely tight together. It felt like I'd need 10 Thai massage therapists walking over my back in order to straighten them out.

I took 2 days of rest in Imphal after that eventful ride. The back pain slowly got less and suddenly it was my last day of riding in India. Except for a couple of weeks which I spent in Bangladesh, I'd spent the last 5 months in India. It felt like such a long time that leaving India the next day was a strange idea.

I didn't want to ride from Imphal straight to the border with Myanmar. I had read in my Lonely Planet guidebook about a beautiful lake in the state of Manipur, only a 45-minute ride away from Imphal. So I made a detour to ride around this area called Loktak Lake.

Not quite knowing what to expect, the lake blew me away. Being the largest freshwater lake in Northeast India, it is famous for the phumdis floating over the lake: a mix of vegetation, soil, and organic matter at different stages of decomposition.

The largest Phumdi covers 40 km2 and contains the only floating national park in the world! Several endangered deer species call this national park home. Unfortunately, I didn't have enough time to try and get up close to the national park. The last stretch of road towards Moreh, the last town on the Indian side of the border with Myanmar closed at 16:30 hours, so I had to make sure I reached it in time. But just riding around the edges of Loktak lake was already rewarding enough! 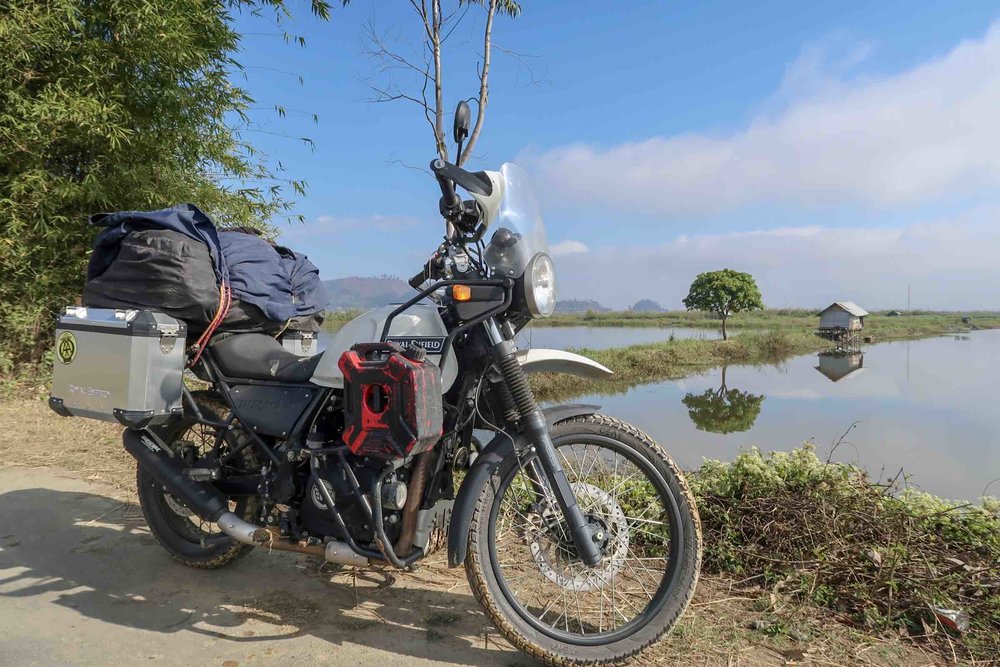 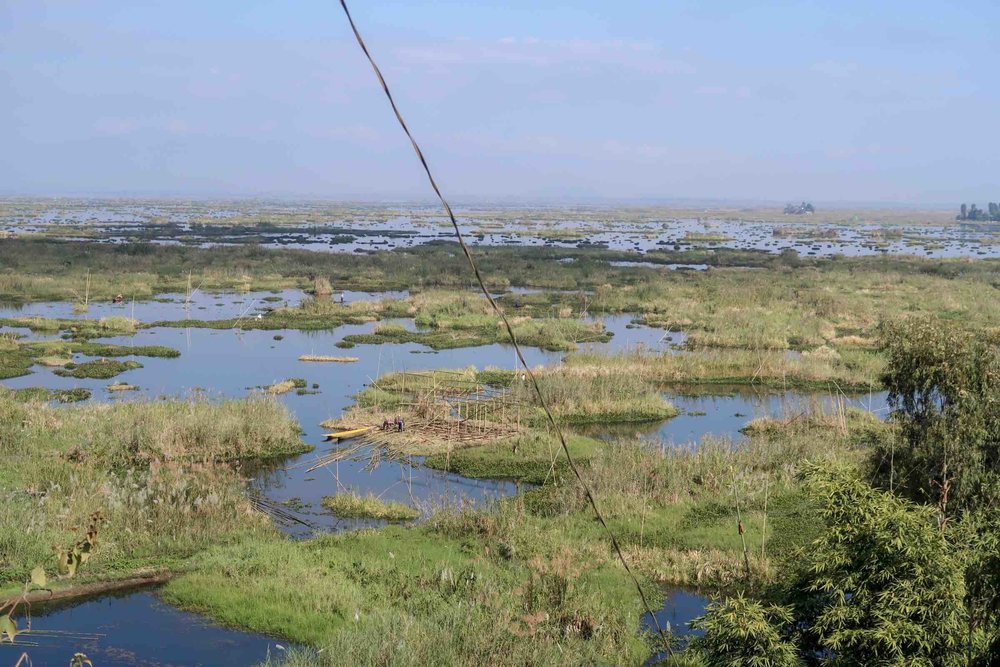 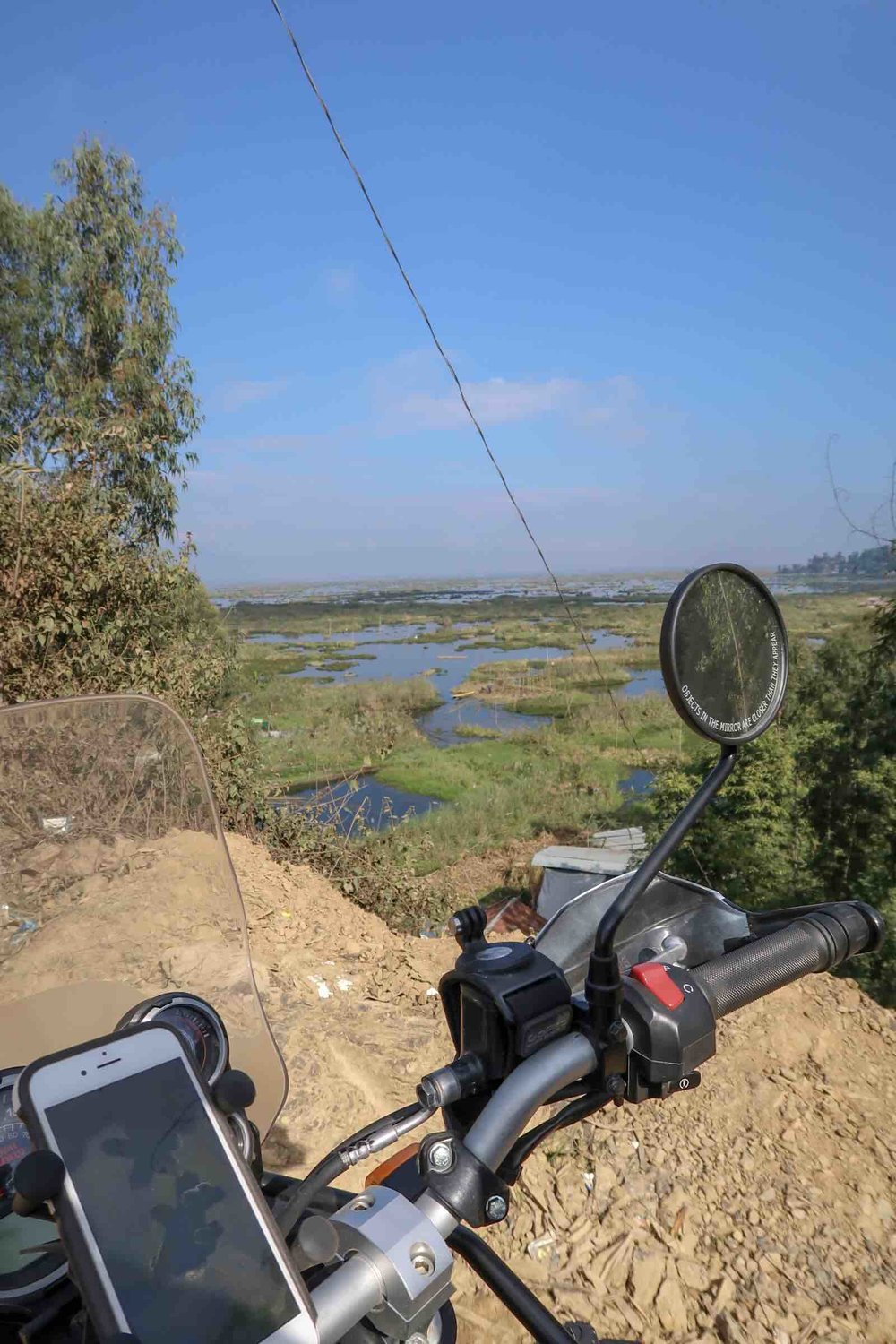 Closing in on the border

When I reached Moreh I rode to the hotel that was recommended to me. Unfortunately, it was fully booked. I tried at least 10 other hotels but they were all full as well. It was the first time on this journey that I struggled to find a place to stay for the night without a reservation upfront.

The place that did have a room for me was extremely grotty. The price matched the quality, so on the bright side: I paid almost nothing. Win!

I can't say I slept well that night. It was probably due to a combination of an extremely uncomfortable bed and me worrying about the coming days. I would travel through Myanmar with a group of other riders as it is not allowed by the Myanmar government for foreigners to ride through Myanmar independently. That means that you need to have a government-approved guide with you as well as a government official.

The costs of having the guide and government official with you amount to several thousands of dollars in total. Unaffordable! So I had no other choice than to join a group of riders, share the cost and ride together with them and the guide through Myanmar for the next 6 days.

I was so used to riding by myself and making my own decisions on when and where I ate, slept, and stopped for breaks that the idea of following a car and having no freedom at all was not making me look forward to the upcoming days.

Interview: RoadsUp To Shillong for maintenance...

The car standing behind you in one of the above photos is the HIMALAYAN'S equivalent in cars in INDIA, it's called TATA SAFARI, the only difference being that it is not underpowered.

Hello Noraly, I am from Kohima, Nagaland, India, I am so sorry that you had to experience the really bad roads during your visit, its getting better now though not completed, but once the world gets over this pandemic, maybe you can come again especially during the Hornbill Festival. Presently I am enjoying your trip in Namibia. Travel safe.