The story of my Patagonia to Alaska trip started in the Netherlands. There I received Dhanno in exchange for giving Basanti to Royal Enfield. I was sad to part from Basanti, with whom I had ridden over 36.000 km, but at the same time, the thrilling feeling of riding on a new motorcycle for my next big trip softened the pain.

It also gave me the opportunity to build and customize my new Himalayan, which I named Dhanno, exactly the way I wanted. I used my experience from riding with Basanti to reuse the things that worked and find improvements for the ones that didn't.

Before the Patagonia to Alaska trip started

My goal was to ride Dhanno as little as possible, but I could not avoid riding her completely. I had to ride her in order to find motor parts, for visiting family and friends, and to my appointment at the American embassy for my visa.

The most important reason for riding as little as possible was that I wanted to avoid tiring out Dhanno's tires. I didn't want to search for new tires during my first two weeks of my Patagonia to Alaska trip.

All in all, I still had ridden 2300 km before Dhanno was put on her way to Buenos Aires. 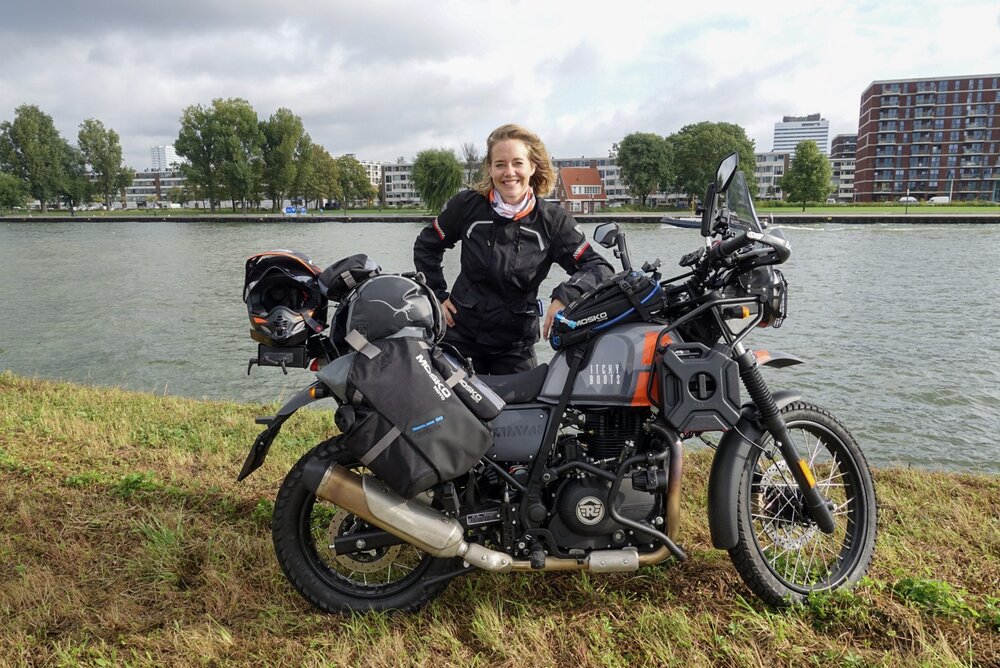 During my research, I found that transporting my bike by sea container would be equally expensive as by plane, thanks to the extremely high port charges in Buenos Aires. Transporting by sea would also mean I would not see my bike for at least a month or two. It was an easy choice to have her fly to Argentina.

Then I learned that it was cheaper to fly her from Heathrow to Buenos Aires than from Amsterdam, even if I added the extra expenses of putting her and me on a ferry to the UK and flying myself back to Amsterdam afterward.

“Tip: When you plan to ship your motorcycle, ask for several quotations from different shipping companies both air and sea. Prices depend heavily on the size of your motorcycle, place of origin, destination and flight availability. In my case it turned out that shipping from the UK was cheaper due to the current weakness of the pound to the euro. ” — For more information visit www.horizonsunlimited.com

So the choice was made, and I drove another 360 kilometers to bring Dhanno from the Netherlands to Heathrow. Going to the UK with her also seemed like fun to me, and I saved some kilometers by taking the Stena Line ferry from Hoek van Holland instead of riding to Calais in France for the Eurotunnel-train, which would be faster but added more kilometers to my ODO.

The Stena Line ferry was like a five-star hotel on water, what a luxury. The slight inconvenience was that my cabin was right above the ship's engine room, and I was shaking out of my bed the entire night. I did not get a lot of sleep, but that didn't matter. Me and Dhanno were finally on our way!

We arrived in Harwich the following morning and I rode straight to Heathrow over the slightly boring M25. As much as I would like to do a full tour through the UK one day, with wild Patagonia in my mind I didn't feel like exploring the UK this time.

On my way to Heathrow, I could only hope that this time the shipment would go smoother than my previous one when I tried to get Basanti crated and ready to be shipped in Kuala Lumpur. It took me two episodes to get her sent off.

It turned out that James Cargo Services was a very relaxed and well-organized company. When I arrived at their unit, I saw several motorbikes in their storage either waiting to be shipped or to be picked up. It was clear to me that they were specialized in this kind of work. To top it off, they drove me in a fancy BMW to the airport, so I could catch my flight back to the Netherlands. 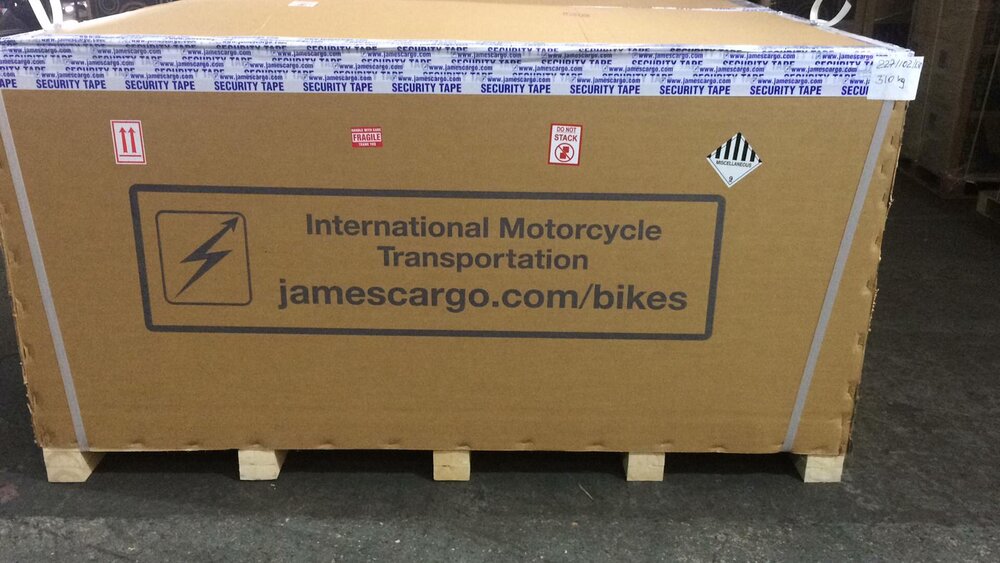 While Dhanno was being crated and shipped, I used my time in the Netherlands to sort out the final bits and pieces of my upcoming trip. James Cargo Services did not give me much time for that, because only two days after dropping Dhanno off in England, she was already ready to board.

I immediately booked my flight to Buenos Aires, because I needed to arrive just before Dhanno did. This way I could pick her up as soon as she arrived and avoid paying enormous fees for storage on the airport.

To help me with that, I hired Javier and Sandra of Dakar Motos. They were going to help me get through all the customs and airport procedures. They have been importing and exporting bikes in Argentina for 15 years. Probably fair to say that they know better what to do, than I. In the end it was totally worth hiring them, as the procedures are an absolute nightmare here. All in all it took us 5 hours of paperwork and procedures before I could finally hug Dhanno.

There was one small disappointment though. The bolts of my windshield had disappeared during transport. It was taken off in London, to reduce the height of the bike, and thus the crate, and thus the cost for shipping. But unfortunately, the bolts didn't make it to Buenos Aires. Luckily, Javier helped me out by putting the windshield on Dhanno with zip-ties.

Because Dhanno went on a ‘dangerous cargo flight', I didn't have to drain the oil and liquids. I also had a quarter tank of gasoline left, and the battery was still connected to the engine. The staff from the airport helped me to open the crate and they also took care of disposing the crating and packing material. All I had to do was to turn the key and ride out of the airport full throttle!

I was already pretty jetlagged from the 14 hours flight and all the hours at customs, but I still had to ride Dhanno through the busy traffic of Buenos Aires to my AirBnB. Needless to say, I was completely knackered when I arrived at my temporary home. Tired but also very happy, now the adventure could begin! The only thing I had to do before riding off was to find bolts for my windshield.

The first 200km of my Patagonia to Alaska adventure

Finding some bolts to fix my windshield turned out to be an easy task. My AirBnB-host directed me to a small shop around the corner and they sold the exact bolts I needed. Pumped with excitement I left Buenos Aires that morning. Little did I know that the very first day would turn out to be one of the most memorable days of all my motorcycle travels so far.

First a big thunderstorm forced me to seek shelter, then I dropped Dhanno for the first time on a slippery muddy road and as a bonus a flat rear tire. It was not the kind of first day I had in mind when I left my AirBnB that morning.

Not only bad things happened during that first day though. Although the Argentinean countryside is not densely populated, the people you meet are very friendly and helpful. A kind veterinarian offered me a place to hide when the thunderstorm approached. While we waited for the storm to pass, he gave me a tour through the agricultural school. A man that passed me when I was trying to pick up Dhanno from the mud, helped me to get her up again. Then a family invited me over to their ranch for lunch and where I could wait for the tracks to dry up.

The final challenge of that day, the big nail in my rear tyre, I had to solve by myself. There was absolutely nobody around. To my own surprise, I didn't panic at all. I took my bags off Dhanno, got my toolkit out, and started to work. All in all, it took me 2,5 hours, but I got the job done. After that it was another 30 kilometers of riding through sand before I reached Las Flores and could finally call it a day!

Dealing with challenges and fixing problems

I could write an entire blog post explaining every choice I made before this trip. Why I chose these specific tires, why I have tubes, or why I don't use sealant. I don't want to do that, as it is not relevant. No matter what set-up you choose and no matter what choices you make, there are always things that don't work out the way you had planned. As they say, the only thing in life that is for certain is that nothing is. You will face challenges and problems when you travel, no matter how well you think you prepared yourself for it. The only thing that matters is your attitude towards fixing your problems and then move on!

For instance, a few days later I had somehow somewhere along one of the dirt tracks, lost my bike's number plate. The plastic holder that the dealer had placed, had broken off. Never thought about that being a possibility. When staring at the empty space at the back of my bike, I knew I had my next challenge in front of me. I needed to arrange a new license plate from The Netherlands, have it shipped to Argentina, and in the meantime create a temporary plate as a replacement.

Every disadvantage has it's advantage

I spent a week in Viedma waiting for my new plate to arrive from The Netherlands. I didn't mind spending that week there at all. As usual, I traveled faster than planned. I wanted to reach Patagonia in summer but at the pace I was traveling, I would arrive there in early spring and it would still be freezing cold!

While waiting in Viedma, I had time to explore the nature and wildlife in the area and spent an entire afternoon hanging out with locals watching local dance groups perform. I can't remember when, on my Asia - Europe trip, I felt this relaxed!

After the license plates had arrived, I rode the final 1000 kilometers before I clocked the 5.000 mark on my ODO. It only took me 3 days of riding! The distances in Argentina between towns are huge, forcing me to make long riding days in order to reach the next place. I tried not to ride southward too quickly, but there aren't many options for detours along the way either.

Those final 1000 kilometers were spectacular with many wildlife sightings. I spotted a grey fox, armadillos, guanacos, maras, whales, sea lions, elephant seals, giant petrels, nandus and penguins! None of these sightings were on organized tours but just from the seat of my trusted Dhanno. I can't wait to clock the next 5.000 kilometers!

How do I find the right acc... Interview: Notiers Frontiers

New bike of choice for season 6