After 10.000km through Africa, I have written a bike review about my Honda CRF250L. You can read it here...
Login

The first 5,000 kilometers with Dhanno only brought me about half-way down the coast of Argentina, because I had ridden quite a few miles in The Netherlands before arriving in Argentina. Now, having reached the next 5.000km milestone, I have ridden every kilometer of it in South America, mostly in Argentina.

After I had hit my first 5.000km mark, I continued riding south in the direction of Ushuaia on the east coast of Argentina. The main road here, the Ruta 3, probably classifies as one of the most boring roads to ride on in the world. Flat plains as far as the eye can see, a straight asphalted road, and fierce side winds make this an exhausting and boring motorcycle ride. I tried to find and ride as many dirt tracks as I possibly could find. I did everything to avoid riding this Ruta 3!

It was inevitable that I had to transverse hundreds of kilometers of plain flat landscapes, but my efforts in finding interesting places along the way got rewarded. The highlight being the petrified forest close to Jaramillo. To reach it, I managed to find an alternative provincial road and rode it for 100 kilometers without encountering a single soul.

I guess that most people that drive down to Ushuaia try to blast their way over the Ruta 3 as fast as they can. Barely anyone makes the detour to visit the petrified forest, so I had it almost completely to myself! Even though I have a background in geology, I never had the opportunity to marvel at trees that lived 150 million years ago, and have now turned into stone.

The end of the Americas in Tierra del Fuego

But in the end, I too was stoked when I saw the snow-capped mountains in the far distance. I'd finally reached the island Tierra del Fuego, the land of fire. This archipelago is divided into a Chilean and an Argentinian part. The weather forecast predicted a week of relatively good weather: sunshine, no wind, and 15 degrees Celcius. I embraced that news and made sure I was riding my motorcycle each and every day. This way, I could also avoid the rainfall and cold weather in Punta Arenas, which would be my next destination!

For me, the highlight of all my rides in Tierra del Fuego was reaching the ‘end of the road'. In fact, there are several locations that are marked as ‘the end of the road', both on the Argentinian and Chilean side of the border. For my end of the road, I chose a gravel road that runs mostly perpendicular eastwards along the Beagle Channel. I rode it until I could not ride any further. There I accidentally marched into the office of the prefectura (the coast guard), where they luckily appreciated my surprise visit and treated me with a cup of coffee.

Riding along the Beagle Channel gave me the feeling that I'd truly reached the bottom end of the American continent.

And yes, this channel was named after the ship HMS Beagle which sailed to the southern part of South America between 1826 and 1830. Onboard was Charles Darwin, and Fitz Roy was the captain. Riding here with my motorcycle almost 200 years later, gave me the same explorer spirit as Charles Darwin and Fitz Roy must have felt when passing through here!

In the end, I was chased away from Ushuaia by upcoming bad weather. I turned around and finally started to head north to my final destination: Alaska. My journey from south to north had officially started!

I raced back to Porvenir in Chile to catch the ferry to Punta Arenas. When I arrived there, it was time for some tender love and care for my Royal Enfield Dhanno. She needed an oil change and a new rear tire. Even though I'd only covered 7500 kilometers on my new set of Pirelli MT-60s, my rear tire had already been worn out. Quite a difference compared to my India to Europe trip, where I rode at least 11,000 kilometers on these tires. Argentina's sharp gravel roads definitely took their toll on the rubber.

The only tire that was available and fitted my motorbike was the Metzeler Enduro 3 Sahara. I decided not to change my front tire because it barely had any wear and tear, and I didn't want to waste money on a new tire that didn't need to be replaced yet. Riding with a different tire on the front and rear wasn't an issue for me either. The biggest difference was having more rubber on the rear and that felt really good!

The first taste of the Andes

Now that I was traveling north, I had the most exciting landscapes laying ahead in front of me, one of them being The Andes. The Andean mountains are the longest continental mountain range in the world. Until I reach Colombia, this mountain range will be my closest friend!

In Tierra del Fuego, I had seen the final extends of the Andes and in Chilean National Park Torres del Paine the real magnificence of this mountain range presented itself to me for the first time.

The snow-covered mountains, clear blue lakes, huge glaciers and it's many rivers are so stunning, that more than 250,000 tourists visit this park each year. Before arriving there, I was slightly worried that I would be riding in the dust of tour buses, but the roads in the park were surprisingly quiet. By far the majority of the visitors come here to walk one of the many hiking trails. 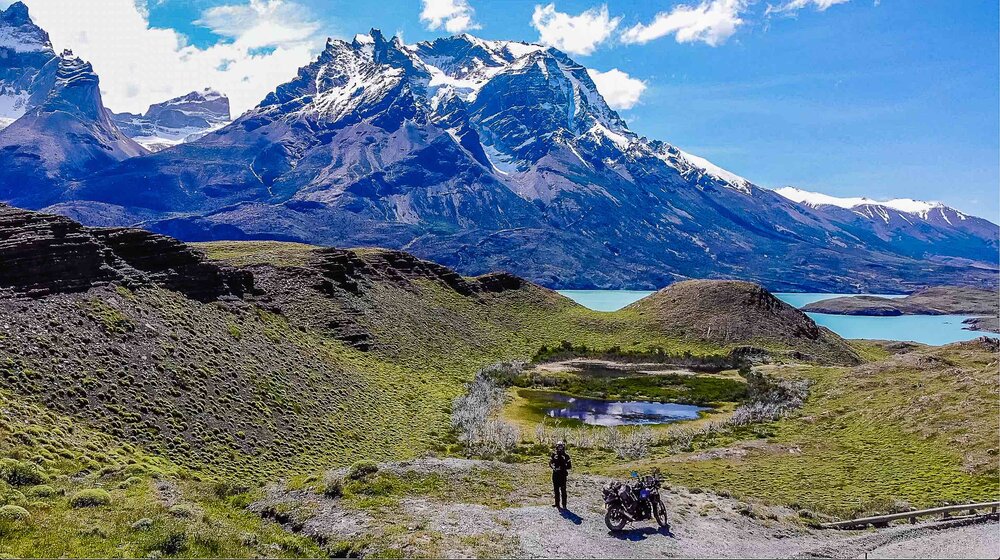 When I arrived at El Chalten, the gateway to the impressive mountain Mt. Fitz Roy, there were only a few people there. Each year, this tiny town is flooded with hordes of avid hikers of which some of them do the 8-9 hour return hike to view Fitz Roy from up close. I didn't feel like leaving the comfort of my saddle so I skipped this hike. I decided to only climb a small hill on the edge of town.

I strongly believe that there is beauty everywhere in the world, but in some places you just have to look a bit harder for it! So, I decided it was time to fulfill a dream of mine: riding on a horse in Patagonia. In my teenage years, I dreamt of rounding up cattle on a Patagonian farm while galloping on a stunning horse.

Wearing a gaucho hat, I galloped on my horse to the top of a hill while the sheepdogs were running beside me. From the top of the hill, I looked out over the endless wilderness of Patagonia.

I love riding my motorcycle, but traveling on the back of a living animal adds an entirely new dimension to it. This day on the back of a horse became the absolute highlight of my entire stay in Patagonia, who would have thought that! 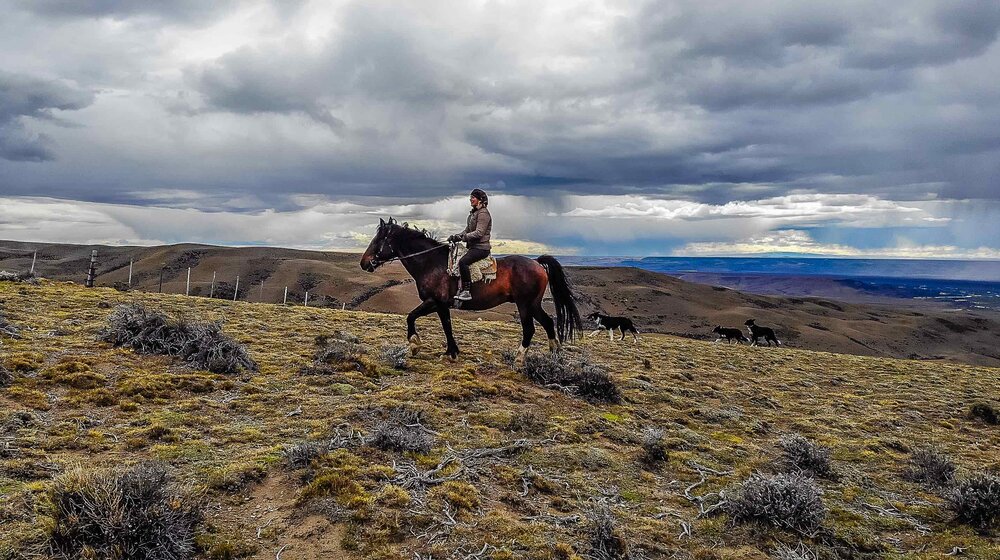 Crossing the Andes by motorcycle

After all the experiences on the Argentinian side, it was time to cross the Andes into Chile for the first time. I searched for a small border crossing because in my experience these border crossings are usually the fastest, more interesting and more enjoyable. The border officials are usually very happy to see a person at their quiet border!

I went for the border crossing at Paso Roballos, and it was fabulous. The entire day I rode on unpaved roads winding through the mountains and crossing rivers and valleys in National Park Patagonia. I picked a very windy day for this ride though. At times the wind was so strong, that I couldn't stand on my pegs and had to sit down or I'd be blown off the road.

The only minor thing was that the road turned out to be a so-called “washboard” road. The trick to riding these roads is to stand on the pegs and ride at least 70 kilometers per hour. But when you have narrow curvy roads with blind corners, possible upcoming traffic, and deep gravel in the corners, it's impossible to maintain that speed. I ended up giving Dhanno and myself a proper beating for hours on end! Completely exhausted I reached Cochrane in Chile, and from here on I continued my journey on the famous Carretera Austral.

The Carretera Austral, also called Southern Highway, runs for 1,240 kilometers from the town Puerto Montt to Villa O'Higgins in Chile. A large part of this road is still unpaved, but road construction is well on its way to make this a fully paved road within a couple of years. I was glad that there were still some graveled segments. These gravel roads keep the hordes of tourists away, but it was still a huge difference with quiet desolate Argentina, where I could ride for hundreds of kilometers without seeing anyone. Now, dust clouds kicked up from oncoming traffic and covered me and Dhanno in a thick layer of dust.

I noticed I had reached the 10,000 kilometers on my ODO just before I entered the largest town along the Carretera Austral: Coyhaique. It is a nice town where about 40,000 people live, but even here the evidence of all the protests that were going on in Chile by the end of 2019 was clearly visible. During daytime, life seems to go on as usual. But when I paid more attention, I noticed that people were in fact busy replacing broken windows, that commercial banks were hidden behind wooden plates or even metal barricades. Street tiles were missing because angry people had pulled them out of the pavement to throw them at government buildings and the police. There were also charcoaled areas where things had been set on fire. Many of the shops in the city center were closed or had barricaded their display windows. 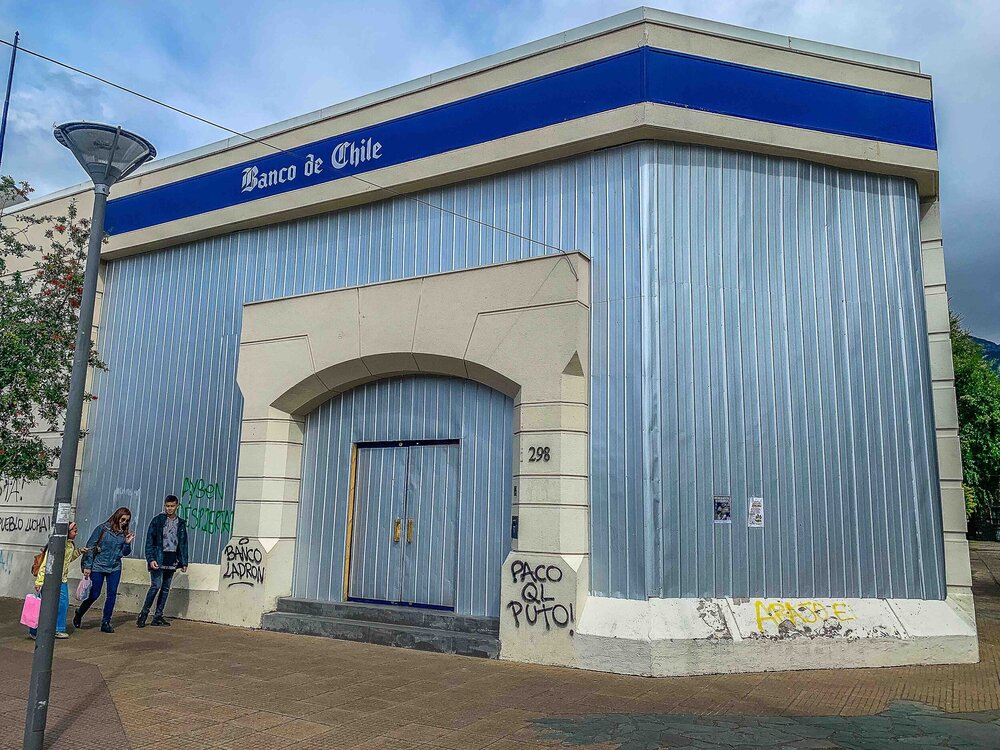 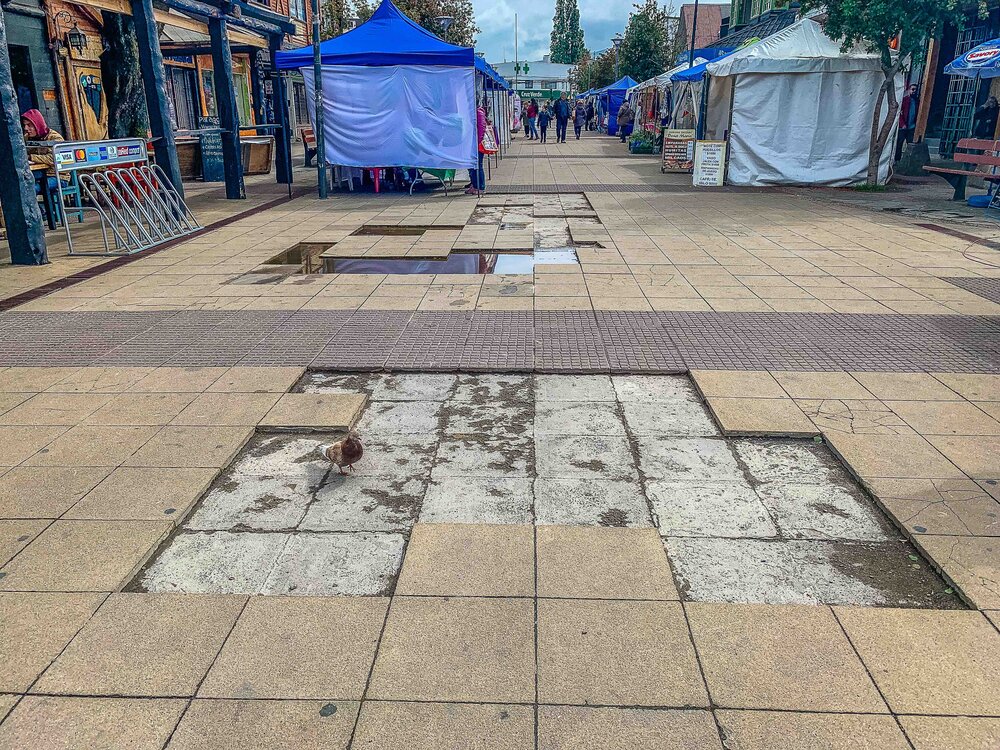 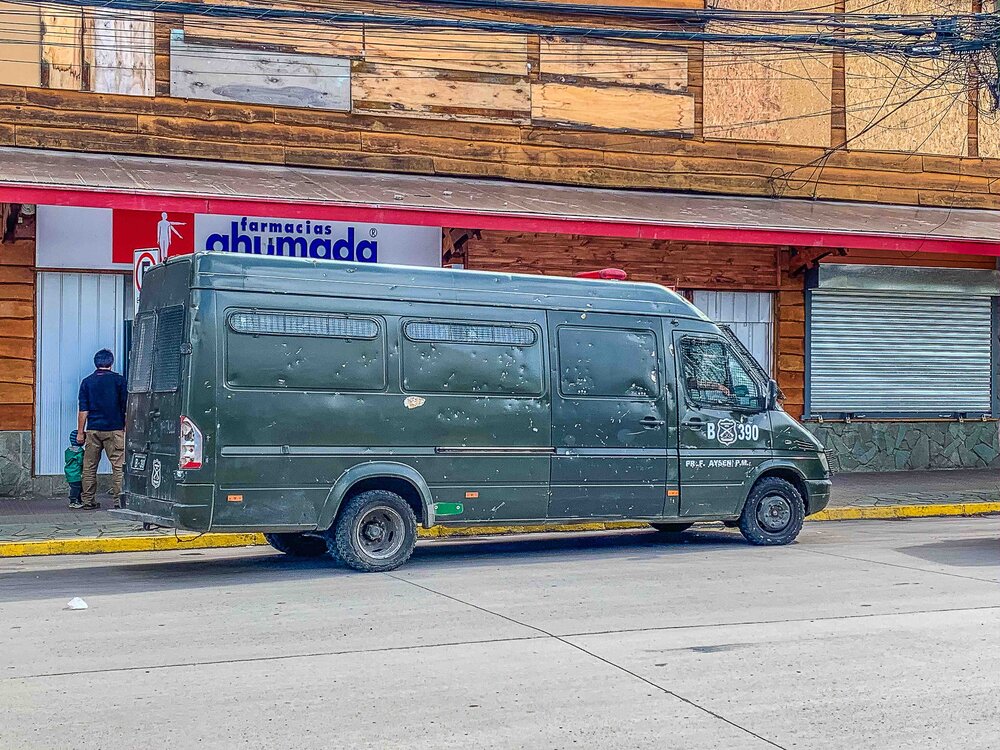 The protests are against the government and the violence is not projected towards tourists or random motorcycle travelers. So I didn't feel unsafe, but I couldn't ignore it either.

The good thing about being here in Chile is that I am actually better informed about what's really going on than when I would read it in the news on the other side of the world. I always keep my ears and eyes open, and talk to locals about the situation. They know best whether it is safe or not to travel.

I live in Brazil and I also have a Himalayan. My dream is to go to Patagonia, it's a beautiful place. But for now I have to wait for the pandemic to end.