Basanti & Me - Preparation for travel through Asia

Right from the start, I was hooked. Riding a motorbike became my ultimate favorite thing to do when living in the Netherlands.

After I had quit my job, I booked a one-way ticket to India. Initially, I traveled as I had always done. With my backpack hopping from plane to bus, to train and into a tuk-tuk. It was in the town of Manali, that my way of traveling changed. Manali is known for its many motorcycle rental shops and it was there that I rented a motorbike for the first time, a Royal Enfield Himalayan. I rode 3,000 kilometers through Ladakh, Jammu and Himachal Pradesh and even ventured all the way into the remote Zanskar valley by myself. It was my first real off-road experience.

This experience planted the seed for a new way of traveling. Why not buy a motorbike in India and ride through Southeast Asia with it?

In the Netherlands, I had a Ducati Monster 796. Buying and riding on a Royal Enfield Himalayan through Asia would be a massive step down for many.

But, the roads in India and Asia are full of dogs, cows, people, trucks, and potholes. Having a lot of horsepowers that I cannot use due to the road condition is frustrating. Plus, there are hardly any mechanical shops that can work on a Ducati, while there are more than plenty of Royal Enfield shops, mechanics and spare parts to find in India and Asia.

So, I bought a Royal Field Himalayan. It took 10 days before my brand new bike arrived at the local Royal Enfield Shop. I named her Basanti, after a famous horse in an old Bollywood movie. Or so I thought, as I later learned that the horse was actually named Dhanno, and Basanti was her rider. 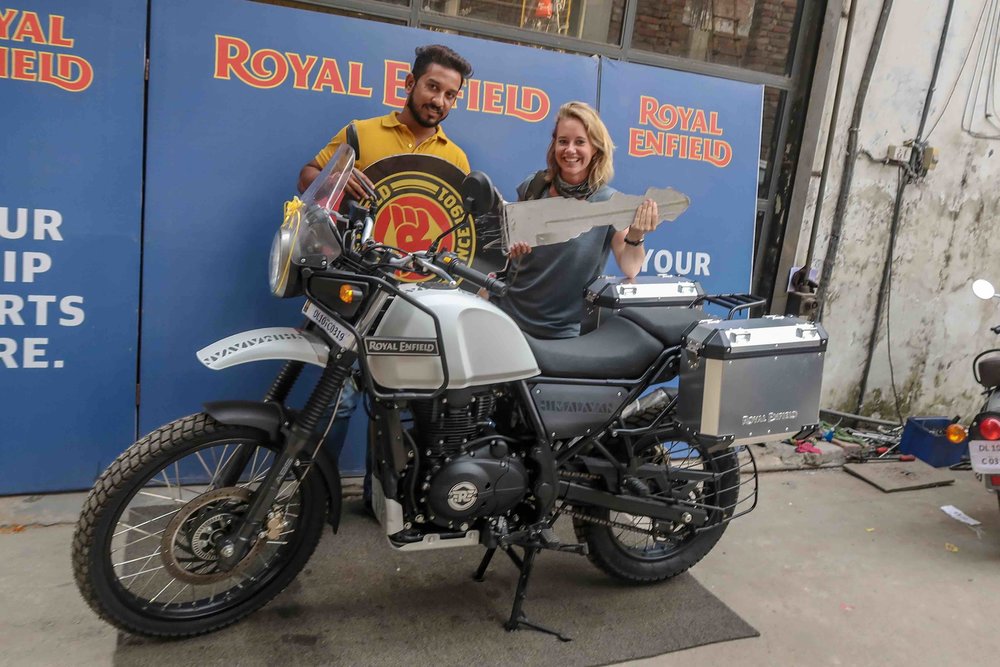 Don't expect to ride away into the Indian sunset when your new bike has arrived. Once you've got it, you still need to wait between 30 and 60 days before you have your permanent license plates and registration card (RC). In the meantime, you can ride with your temporary plate numbers and a temporary RC slip, but you have to be in town to pick up the official license plates and registration card.

Some people say that patience is a virtue, but to me the waiting was horrible. In order to keep me busy, I started modifying the bike. This is what I did to prepare her for my ride through Asia. 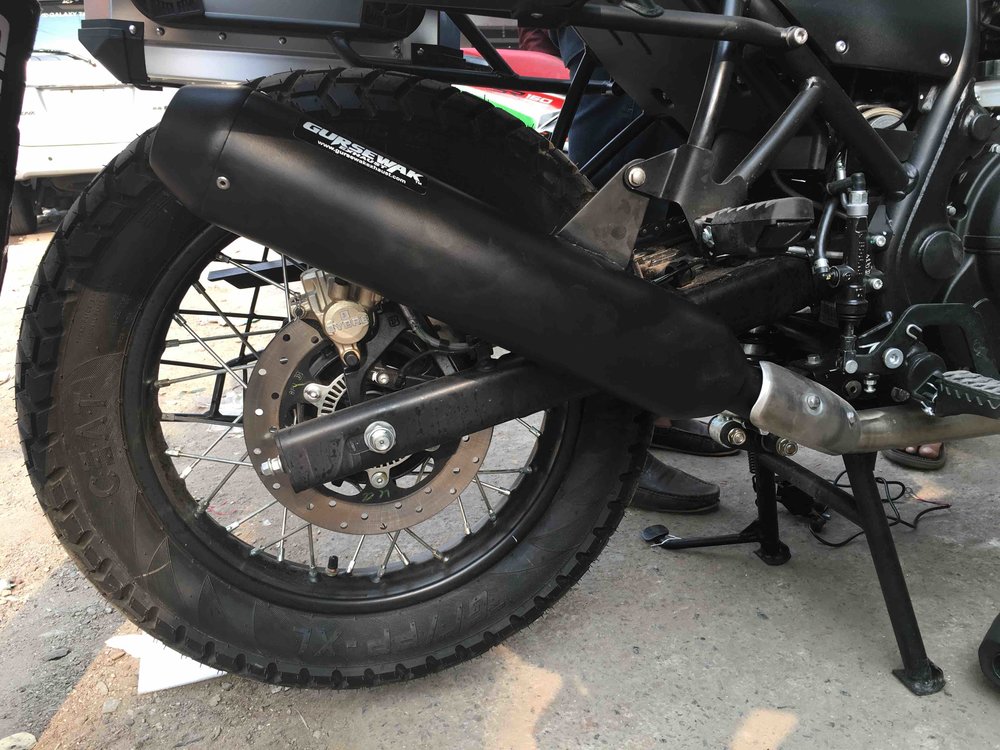 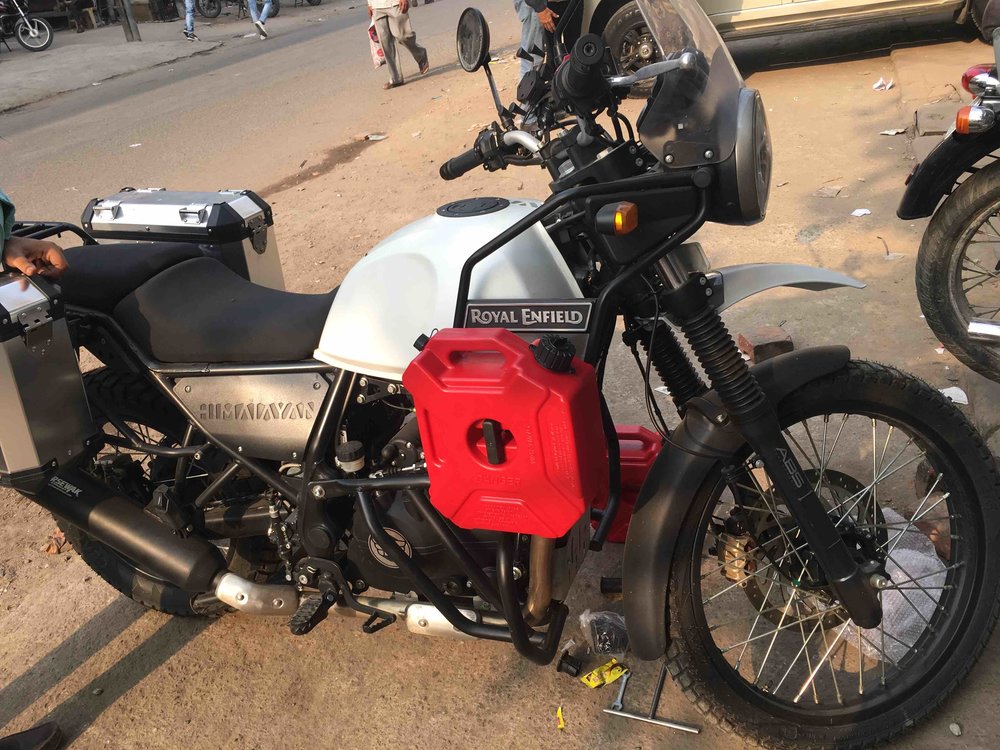 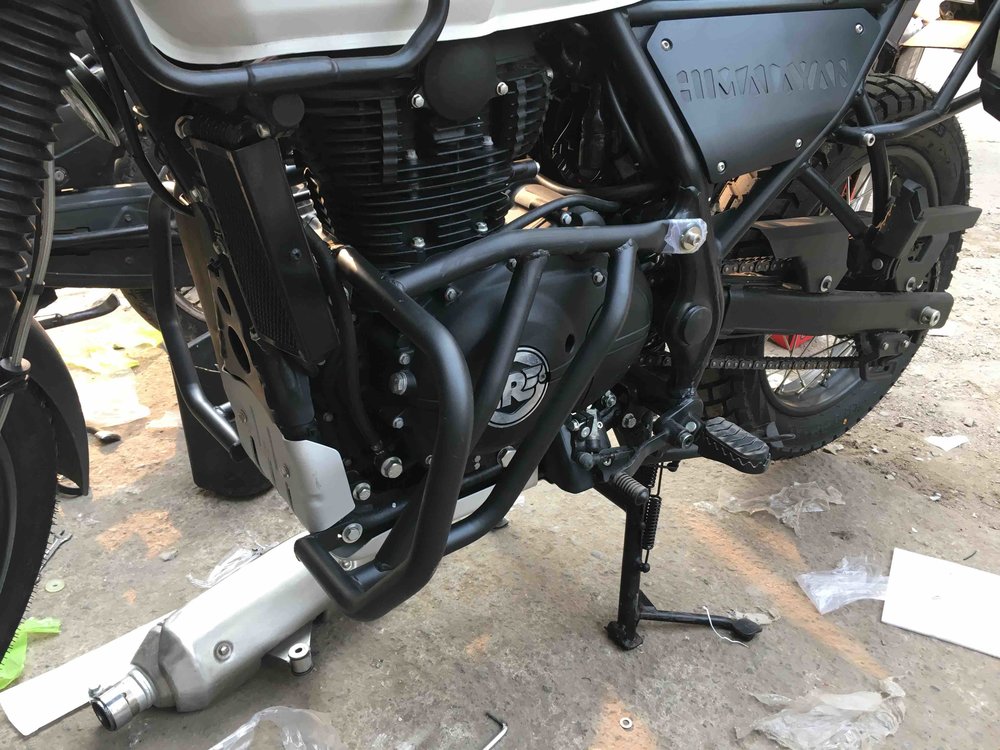 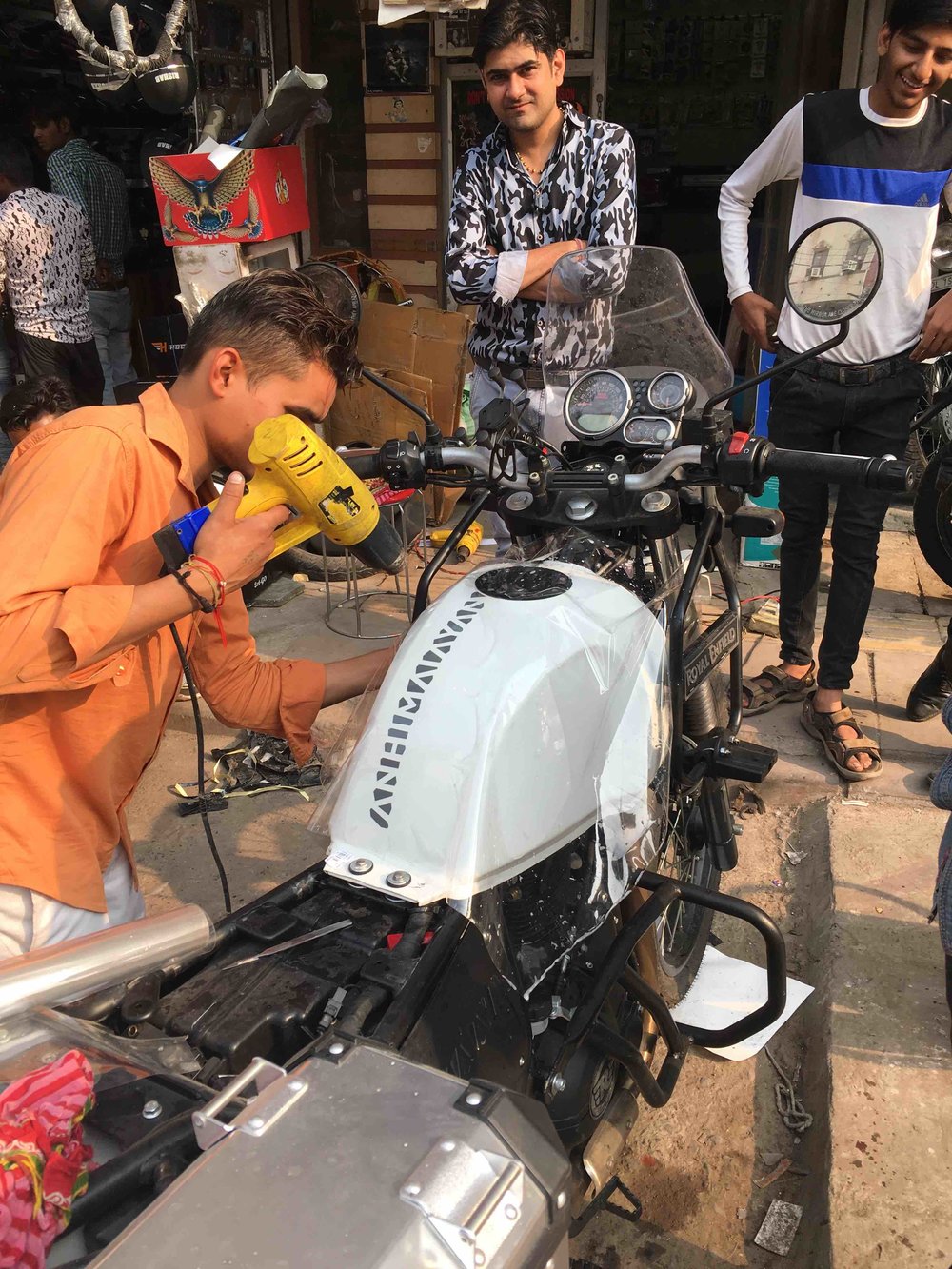 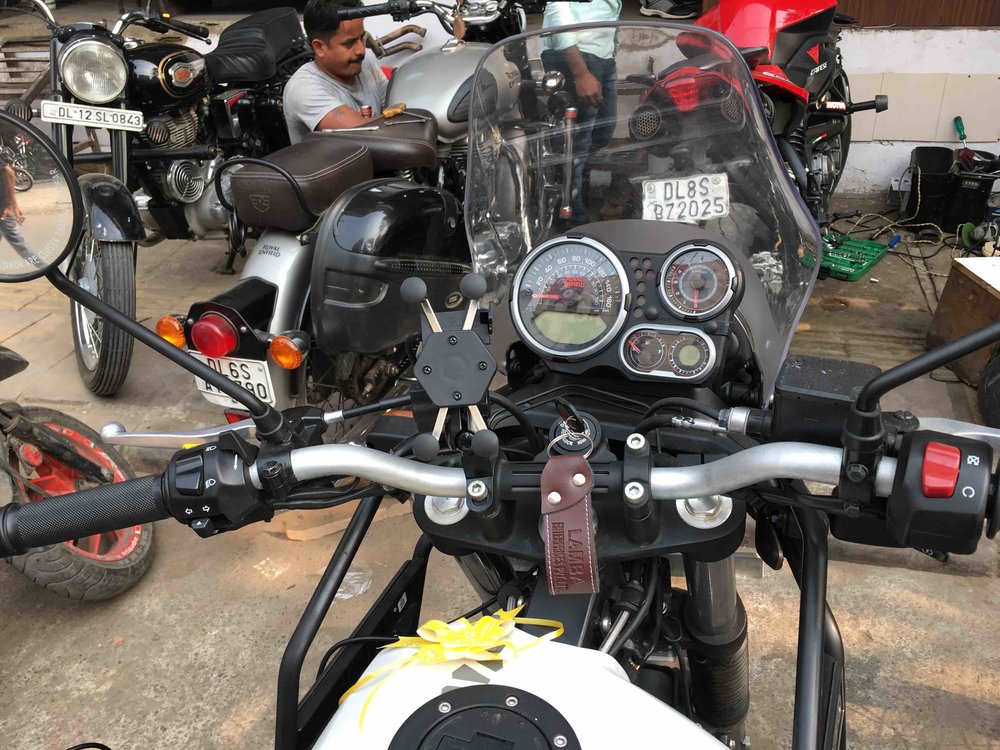 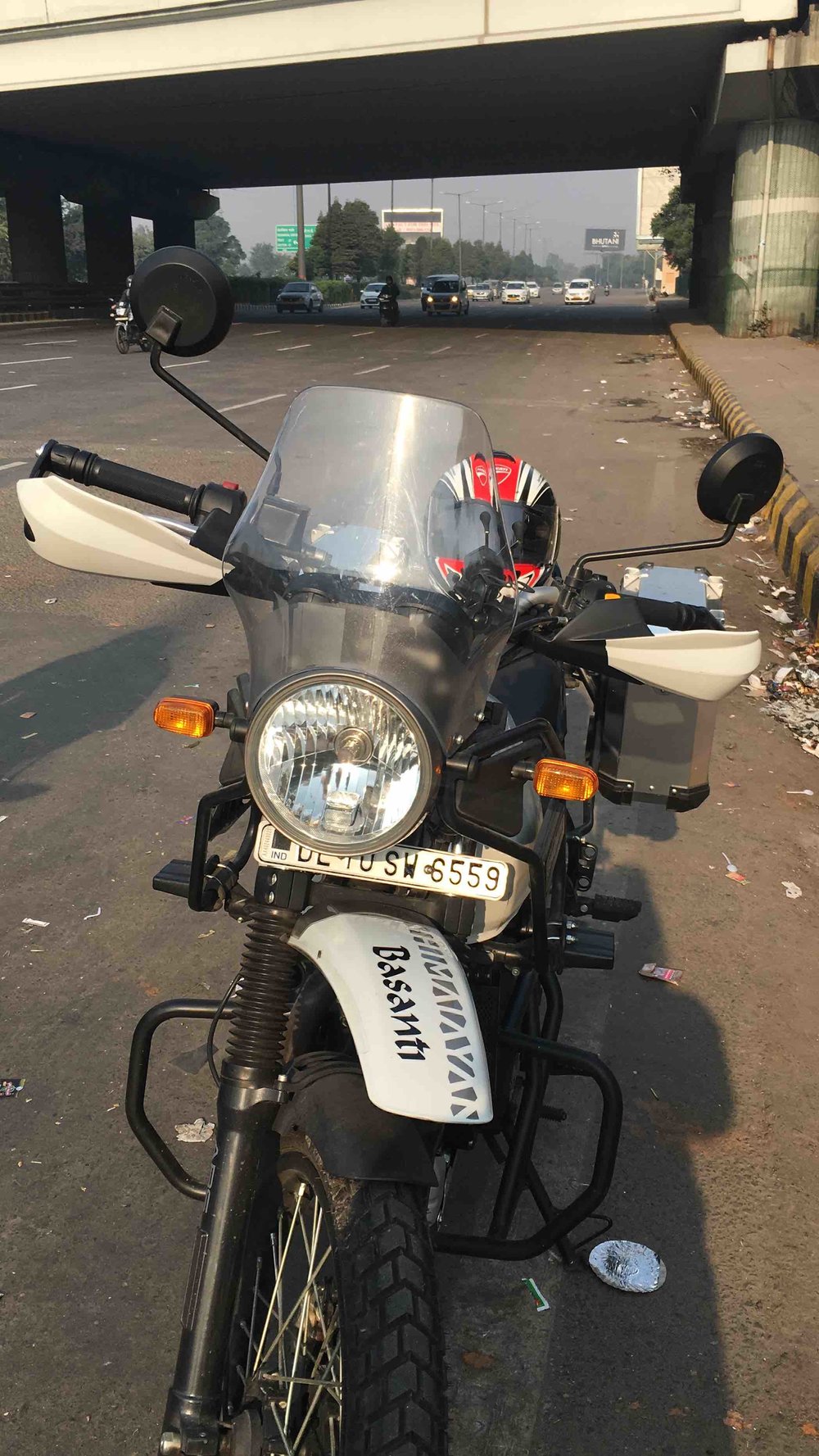 While waiting for the permanent license plates, I had time to learn something about the mechanics of a motorbike. I literally knew nothing.

Every day I went to the mechanic shop to get some lessons. We started with the basics. The first thing I learned was how to get the motorbike on mid-stand. Sounds fairly easy. Well, it's not. It took me an embarrassing two hours before I finally mastered the technique to get it on mid-stand.

At the shop, I learned how to change a clutch cable, the fuses, brake pads, oil, and oil filter. They taught me how to tighten the chain, clean the air filter, change the tires, and how to get the battery from the bike.

I fully enjoyed spending those afternoons in the motorbike district of Delhi. And at some point, I even got used to the crowd of men that gathered around me to watch every move I made. 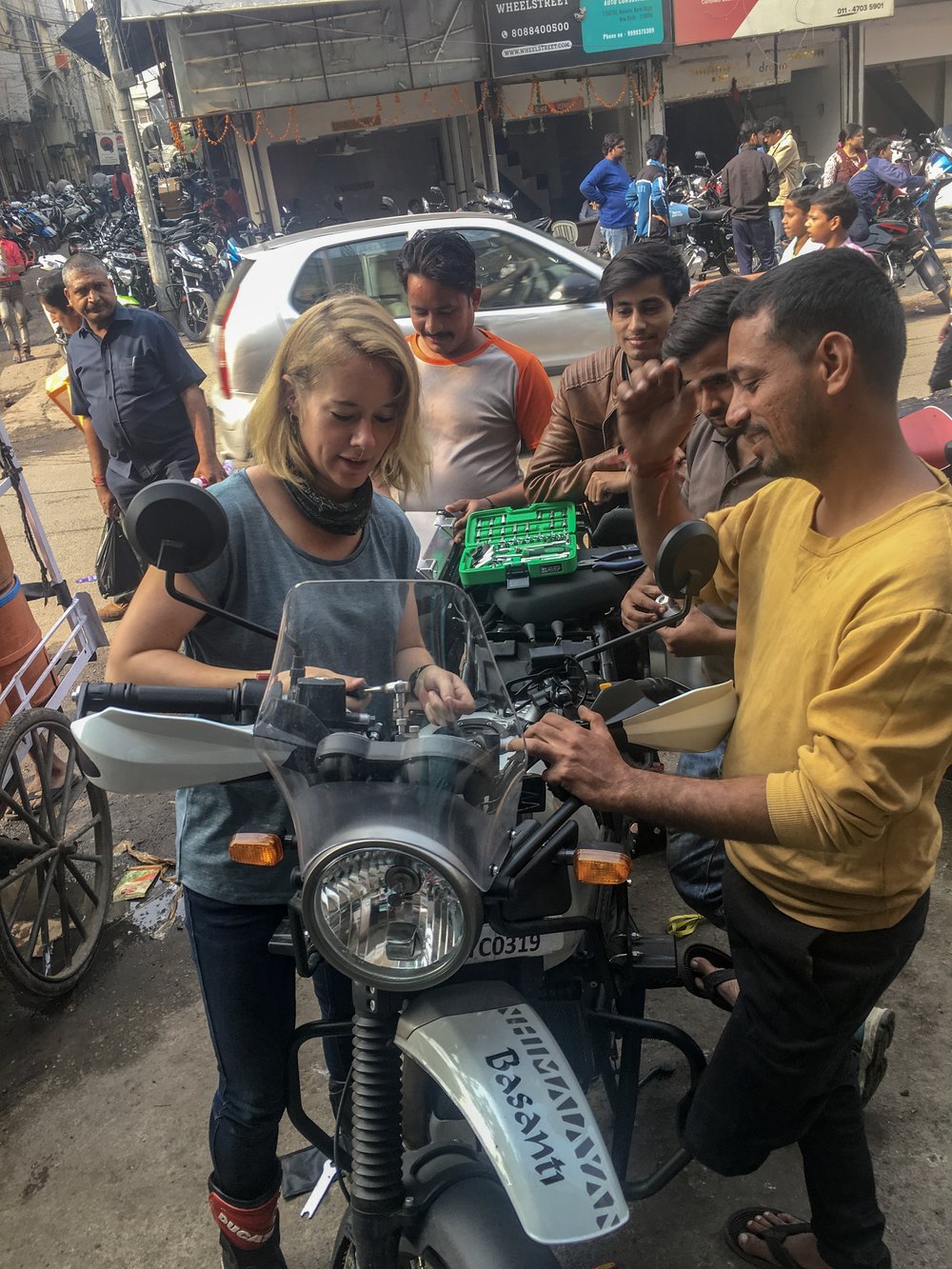 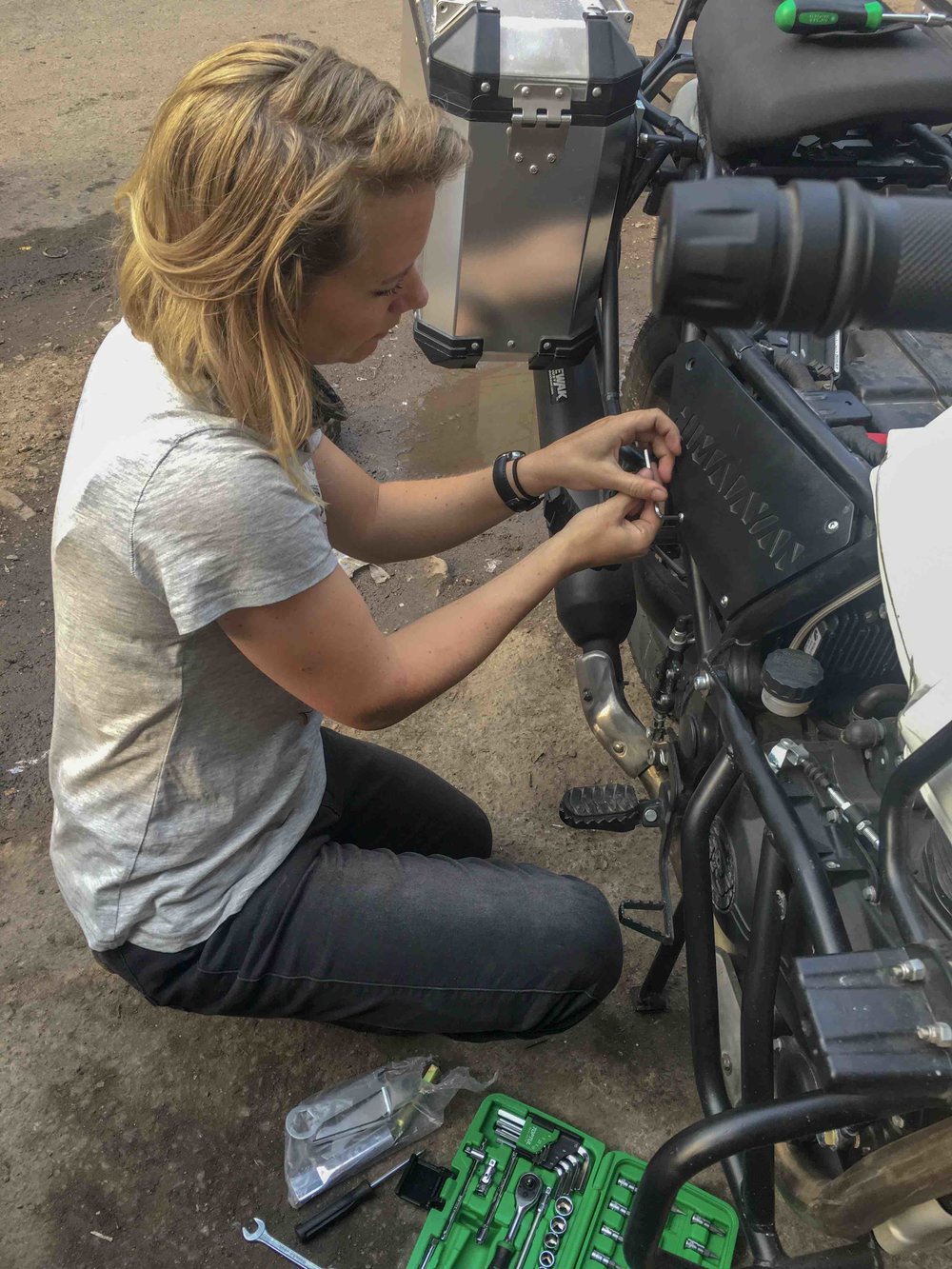 During my lessons, the shop owners and their staff were always on the look-out for the police. All the motorbike repair shops have their bikes parked on the street. The shops are so small that they can't fit any bike inside. But, parking them on the street is against the rules. That is why the police enters their street once or twice every day with a couple of tow trucks. They then randomly seize bikes that are parked on the street and take them away. In order to get the bike back, the bike owner has to pay a hefty fine.

So whenever the first look-out spots the police coming into the street, the whole atmosphere changed. I would hear shouting and people running through the streets quickly jumping on motorbikes to ride away as fast as they can. “Madam, madam! GO GO GO now! Come back in an hour” 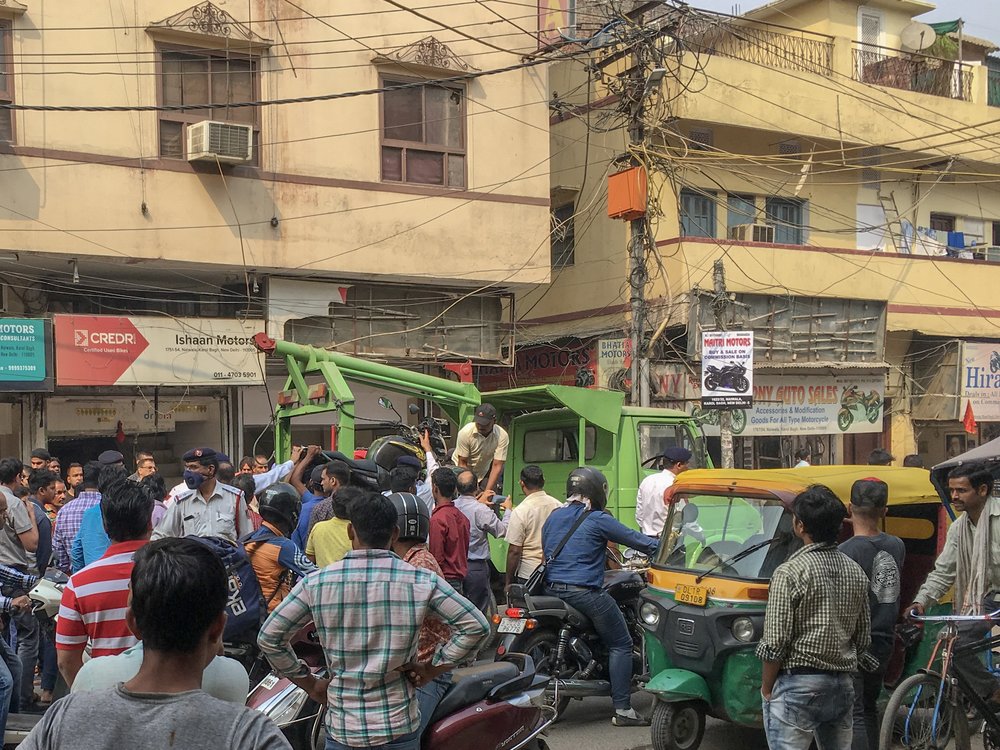 At some point, I learned that I needed a carnet to enter Myanmar and several other countries in Asia. After doing some online research, I found the procedure and applied for an ATA-Carnet. The issuing authority of an ATA-carnet in India is the FICCI, Federation of Indian Chambers of Commerce & Industry.

Just to make sure my application would get processed, I paid them a visit. A very friendly woman told me I was applying for the wrong papers. It wasn't the ATA-Carnet I needed, but a Carnet-de-Passage. She gave me the contact details of the WIAA (Western India Automobile Association) which is stationed in Mumbai.

I rang the number of the WIAA. A woman picked up and told me she can arrange the Carnet-de-Passage I needed. She told me that I was lucky because the chairman of the WIAA happened to be in Delhi the very next day! So she emailed me a list of documents that I had to bring to him, and in addition to that I needed to bring a huge amount of cash. 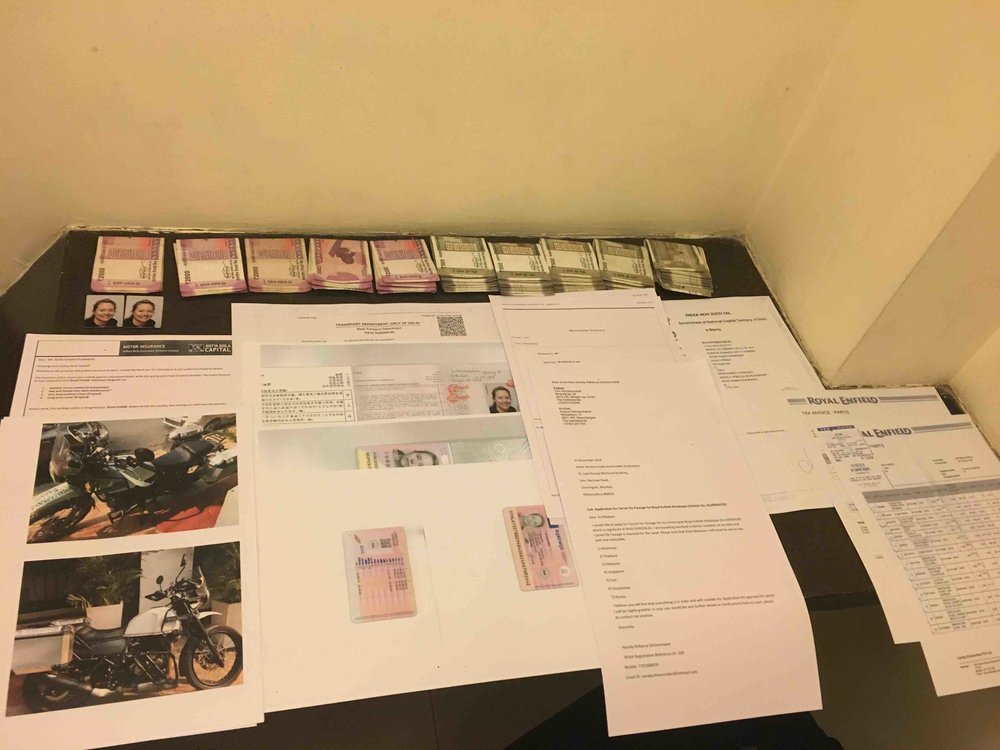 I managed to get part of the money I needed and all the required documents within 24 hours. So the next day I met Mr. Dossa at Connaught Place in Central Delhi.

He was quite surprised to see me and made all sorts of inquiries about my age, country, and job. Then we got down to business. I showed him the paperwork and handed him a gigantic stack of money. It was 100,000 rupees in cash. He didn't even blink and shoved the money in his pocket without counting it.

We both ordered a massive thali and chitchatted about his family and career. He insisted I didn't pay for lunch and we agreed to meet the following week so he could hand me the Carnet-de-Passage. I still had to pay him another 200,000 rupees in cash as a security deposit. In order to get that security deposit back, I had to return the bike to India within a year.

What an experience! Yes, the Carnet-de-Passage I received a week later was real. The issuing authority was correct but honestly, when did a chairman of an Automobile Association buy you lunch while you only had to hand over a pile of paperwork and a stack of money?

Return of the deposit

My travels with Basanti turned out to be quite different from what I had originally planned. I never returned to India and rode Basanti to the Netherlands instead. Officially, you should be able to get your Carnet-the-Passage deposit back when you return the carnet to the Automobile Association you bought it from. The only thing you have to do is prove that you didn't leave the vehicle behind in a country that requires a carnet.

The last country I had to use my carnet for was Iran. I received the ‘exit' stamp which proofed that I had not left Basanti behind. But, when I applied for a return of my deposit, the WIAA refused to give me the deposit back.

In the meantime, I had met other travelers who had also bought a motorcycle in India. They received their carnet from a European automobile association. I don't know the details on how to organize that, but I strongly recommend exploring that option! The cost of getting the carnet will be significantly lower, and you are a lot more likely to receive your deposit back.

First time on the road with... Riding a motorbike on your ...

Hello noraly,
Hope you are doing fine..
I have some queries related to CDP(carnet de passage), is that
a) Is the amount of CDP is fixed for every vehicle??
b) For an indian national, is the security deposit same?
c) Did you get your CPD security deposit back?
d) How was your experience with Himalayan 411 in central asia. should i wait for Himalayan 650 ??
And in the last..thank you!! for being such an inspiration and guide.
Your blogs and vlogs both are very informative.
Thanks a lot!!!

That sure made Basanti an expensive bike ... but she turned out to be priceless.

TT Assen - the racing heart of The Netherlands