In Coyhaique, Chile, I reached the 10,000km on my ODO. Little did I know that within the next 5,000 kilometers, I would cross three very cold border crossings at an extremely high altitude and ride through boiling deserts and salt flats. It was a true adventure ride through the Andes.

Without knowing, I had picked a great time of the year to ride my last part of the 1,240 kilometers long Carretera Austral in Chile. The whole landscape was painted in purples, pinks, and blues from flowering Lupines. This plant, a member of the pea family, is also called ‘wolf'. It got its name because it is known to ravage the land wherever it grows.

Seeds from this plant's family have been used as a food source in the Andean Highlands for over 6000 years and were extensively cultivated by the Incas. However, the type of Lupine that is now growing all over Patagonia is Lupinus polyphyllus, also known as ‘marsh lupine'. It cannot be eaten and it is not native to Patagonia. Most likely, it was introduced by farmers as a natural fertilizer for their soil.

The harmful effects of this evasive species aside, I just enjoyed the landscape and had a fantastic motorcycle ride! 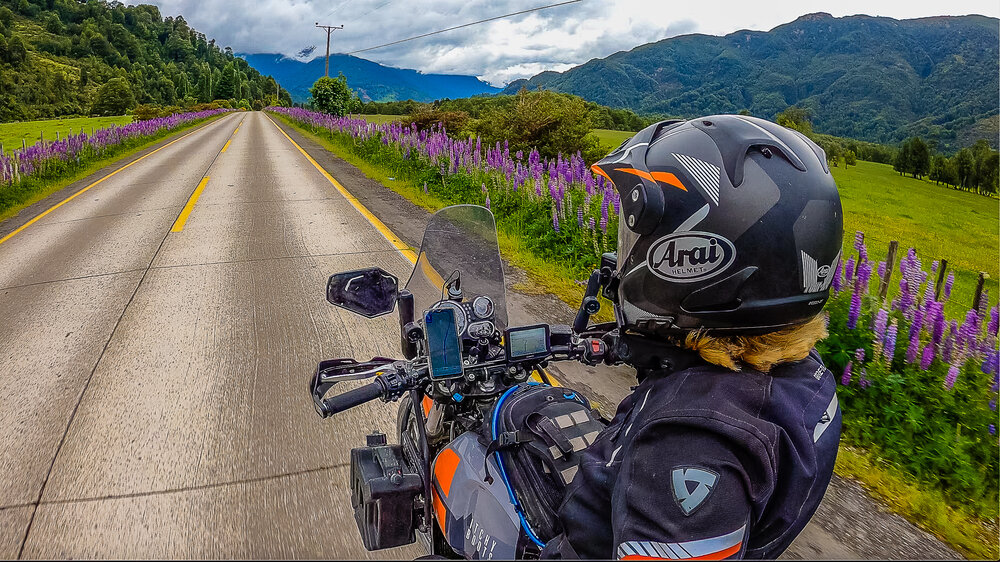 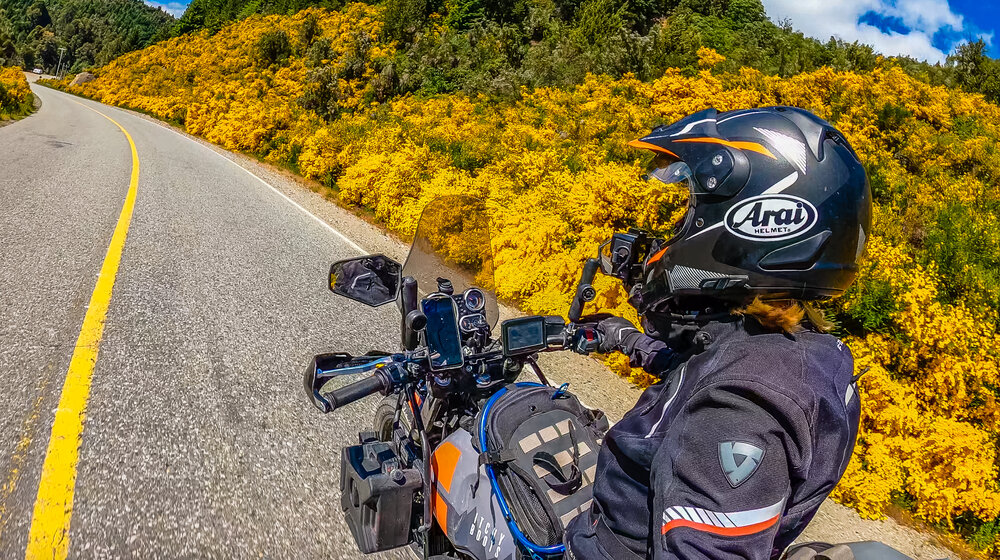 Continuing my botanical journey, I crossed the border into Argentina at Futaleufú to visit Los Alerces National Park. The Alerce is the second-longest living tree species in the world. The oldest Alerce tree has been dated to be 3,600 years old! No need to mention that they are now an endangered tree species, so I really wanted to grab the opportunity to admire these unique trees at this park.

The Los Alerces National Park has not only the largest Alerce forest but also houses the tallest Alerce tree of Argentina. This tree is no less than 57 meters high. In order to see it, I had to cross Lake Menéndez. The ferry crosses the lake twice a week, but not on the day that I happened to be in the park!

I had hoped to see at least some Alerces from the road, but this wasn't possible either without having to leave my fully-packed bike behind and hike for several kilometers into the forest.

The era of the volcanoes

I continued my journey north following Ruta 40 through Argentina's Lake District and passed through the town of Bariloche. Another stunning route lined-up with blooming and evasiveCytisus scoparius or Yellow Scotch Broom. These flowers have such an overpowering strong smell, that I couldn't decide whether to ride through it with an open or closed visor!

After a short stop in Villa la Angostura, where I got Dhanno serviced, I went back into Chile. I hadn't fully realized beforehand that I would be riding for hundreds of kilometers with volcanoes to the left and right of me.

Chile has 123 active volcanoes that stud the Andes from north to south, along the borders with Bolivia and Argentina. One of Chile's most-watched and historically active volcano is Volcano Villarrica. It rises almost 1600 meters above the town Villarica and is also known as Rucapillán, meaning devil's house in local Mapuche language. My goal was to get as close as possible to this stratovolcano with my Himalayan.

The scenery of this National Park was one that I'd never seen before, truly unique. The narrow path I rode on consisted of black ash and pumice from the nearby volcanoes which contrasted beautifully with the green Araucaria trees growing next to the trail. It was a mystical experience.

Unfortunately, the track into the park became harder and harder to ride on. In some places, the path was so washed out that after 10 kilometers I decided to turn around. It doesn't happen very often that I turn back, but I'm glad I did in this case. Sometimes the risk of dropping a fully loaded bike on a technical trail, when you are riding solo, is too high. 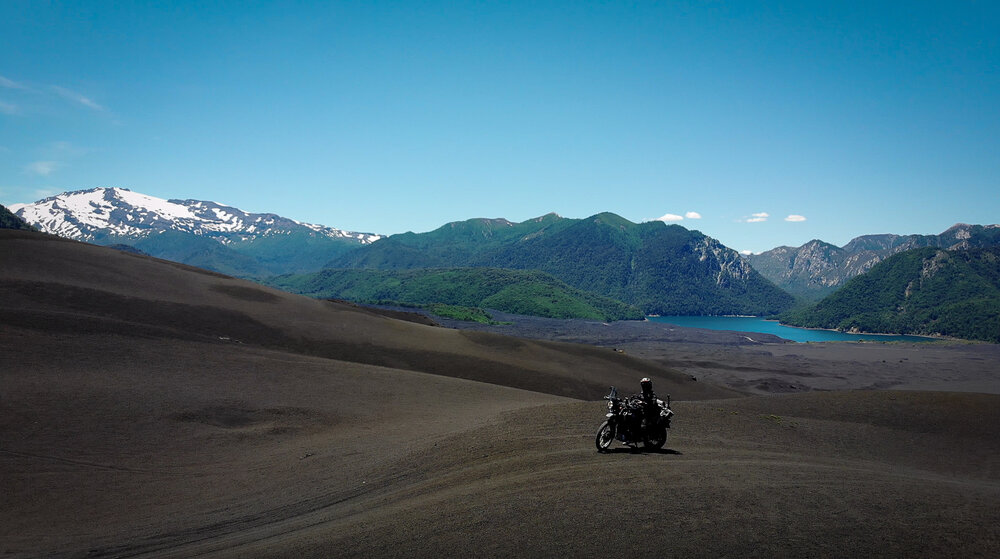 A boiling desert in Argentina

The route back into Argentina was via Paso Pichachén and that led me past even more volcanoes, of which Volcano Antuco was the crown jewel. I was on a motorcycle high after I had crossed the quiet and smooth border crossing back into Argentina and rode through some of the most spectacular scenery of my South America trip so far. I was not aware of the fact that I would experience one of the hardest stretches during my trip so far.

While I rode in the northern direction on Ruta 40, I struggled to find petrol. All I found were abandoned petrol stations in various degrees of decay or with long lines of more than two blocks at petrol stations that were still operating. And yet, the petrol issue turned out to be the least of my worries. After riding for so long through relatively cold and windy Patagonia, I was not prepared for the insanely hot oven I was about to enter.

My usual enthusiasm for unpaved roads evaporated with the increase of the heat. The sandy, gravelly and corrugated roads prevented me from gaining enough speed to cool myself and the air-cooled engine of Dhanno down. Luckily, my Himalayan has an oil cooler, so I didn't really have to worry about Dhanno. But for me, it was pretty unbearable to ride through this heat.

Later I learned that I experienced the effects of a Zonda wind, which can be compared to a hairdryer. It was like somebody was pointing a hot hair dryer in my face while forcing me to hold a cooking oven between my legs at the same time. Add to that my struggle of finding a place to sleep for the night, and you get an idea of how I felt. When I found a hostel, which was another 62 kilometers away, I ended up in a filthy and dark room. You can imagine that this was not one of my favorite rides.

To escape the heat of Argentina in mid-summer, I was eager to hit the Andes again. I planned a nice detour through Chile, which would lead me over two great border crossings: the Agua Negra Pass and the San Francisco Pass. Both border crossings are above 4700 meters altitude, so I didn't have to worry about the heat.

Apart from the expected mild headache and shortness of breath, I felt quite good motorcycling at this altitude. At both mountain passes, I wasn't at this high altitude for very long. Both ascents were relatively steep. Besides being able to escape the heat, I also enjoyed the ride through the Andes. It was magnificent. At the same time, I was stunned by how little traffic I saw. It felt like I was the only person crossing these borders!

Although the Agua Negra Pass was reached by a narrow gravel road which wasn't suitable for regular 2x2 cars. The San Francisco pass had a brand-new paved road, but still I only saw a few fellow travelers. In between the two passes, I rode past the highest volcano in the world, Nevado Ojos del Salado, which reaches an altitude of 6,893 meters. I could only enjoy the sight of the vulcano for a little while, as I quickly ran into a rain and hail storm. The Andes are never boring! 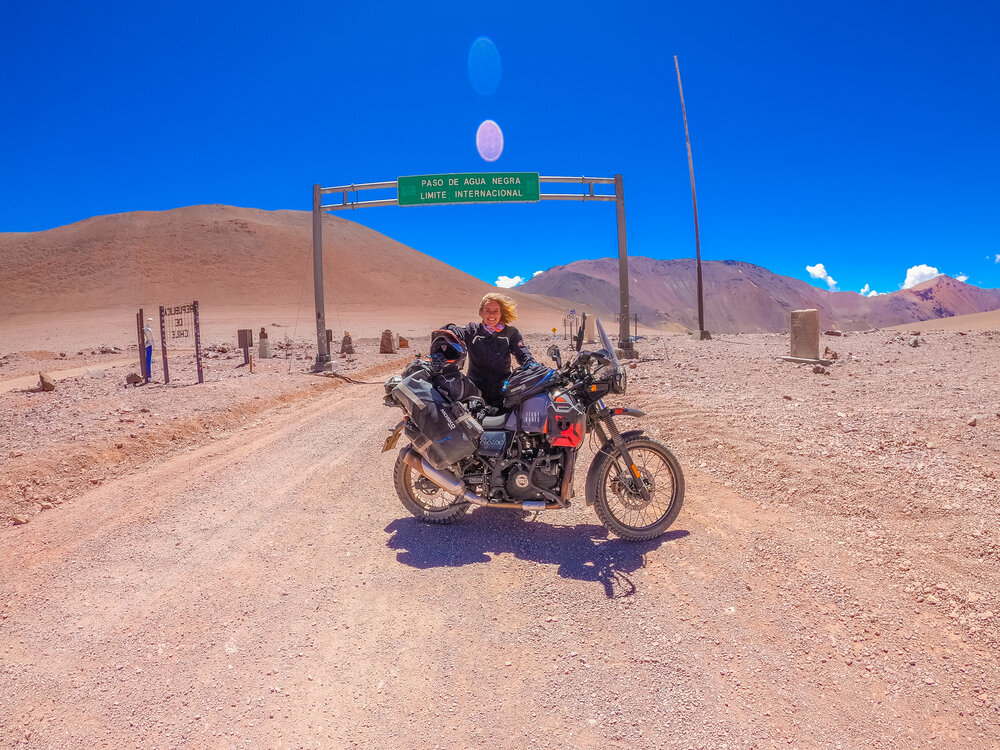 I am not the typical tourist. Quite frankly, I don't care very much for typical tourist attractions. To me, it's the ride that counts. Finding those small back roads and passing through villages that are not flooded by hordes of tourists is what excites me.

That's why I decided to explore an unknown and remote part of Argentina, close to the border of the Catamarca and Salta provinces. Not many people live here or visit this rather hostile environment of arid salt flats and volcanoes. But it is home to some incredibly interesting geological features, so the geologist in me wanted to explore this region.

Riding a motorcycle in this region was exhilarating. The remoteness, the solitude, and the stunning vistas were perfect. But it did not come without some suffering. Kilometer after kilometer of corrugated washboard road damaged both Dhanno and me. I lost the wide side standard foot for parking my bike in loose sand, and the GoPro holder at the back of Dhanno broke off. Plowing through roads like this at 4,000 meters altitude for hours on end was exhausting.

Would I do it again, or recommend this region to others? Well, perhaps if you have a look at the pictures, you can judge for yourself. 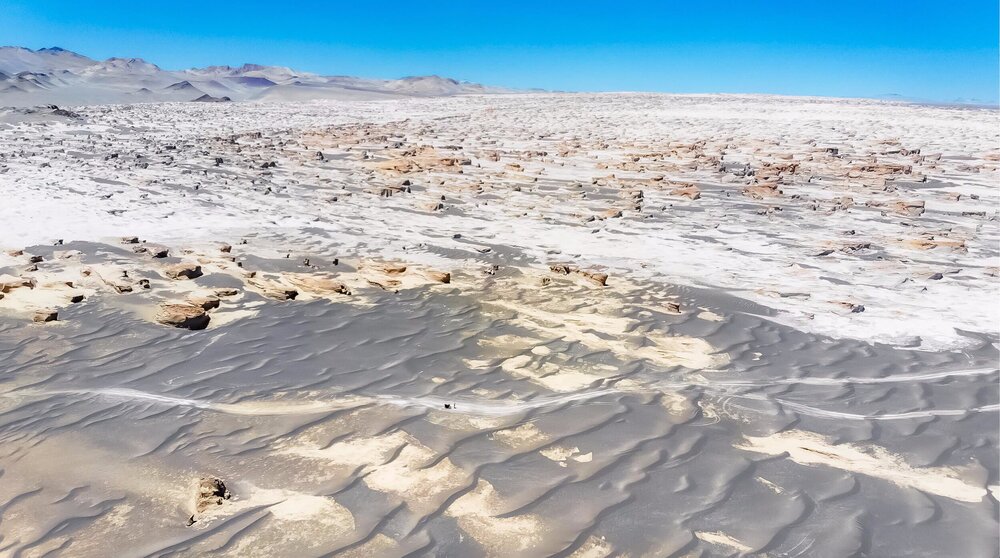 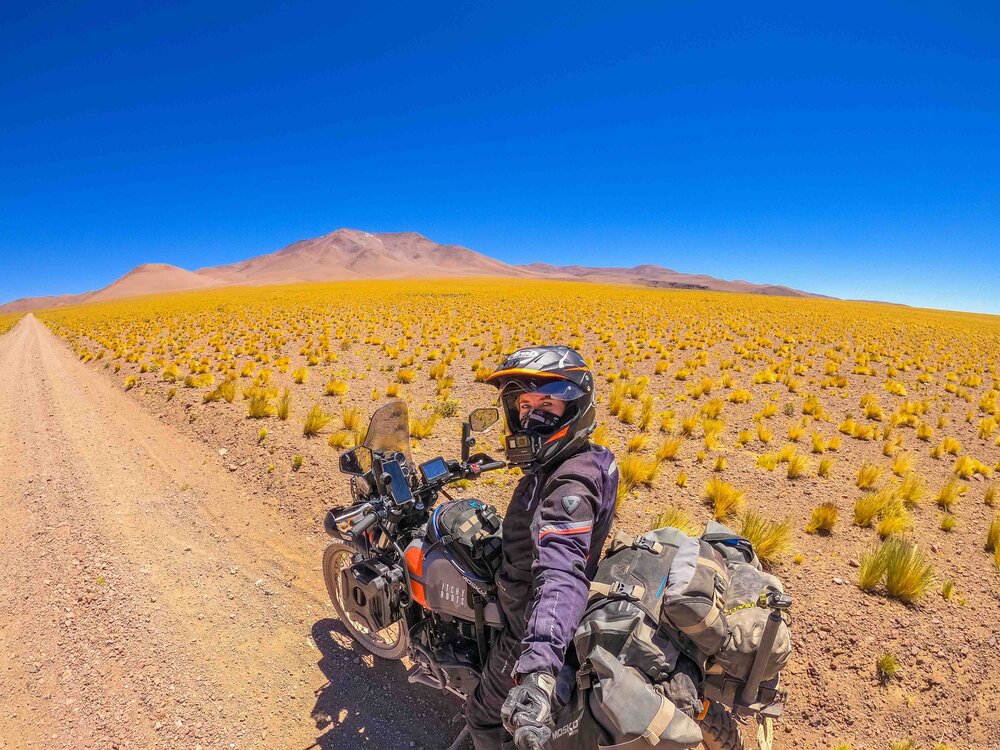 How's this for landscape? 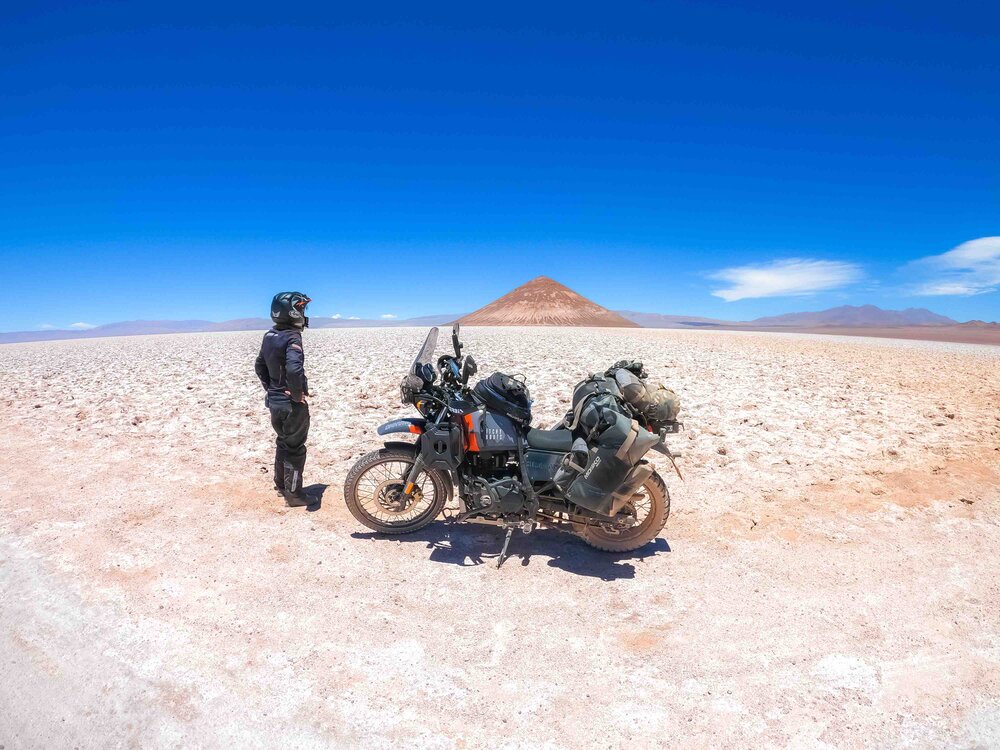 Just before I rolled into tiny mining town Tolar Grande, I noticed the 15,000 kilometers mark on my ODO. What a ride has these past 5.000km been! I am looking forward to the next 5.000km, where I will leave Chile and Argentina behind, and ride into Bolivia.

Catching up on what I believe articles missed by me on a Saturday night waiting for Noraly to publish her Monday adventure. What an adventure this was! Living what would be someones lifetime adventure, on every other day.

New bike of choice for season 6