The Chile-Argentina border is the third-longest international border in the world. It is 5,150 kilometers long and starts at the island of Tierra del Fuego all the way in the south and goes along the Andes mountains to the north. In total, there are 34 border crossings between Chile and Argentina for vehicles.

Out of all those border crossings, I did 10. The reason behind hopping across the border between Chile and Argentina so often is that they offer some of the best scenic rides through the Andes Mountains. There aren't many roads going from south to north through the Andes mountainous region, so these perpendicular roads are the best option if you want to ride on a motorcycle through the Andes!

Below my 5 favorite and most adventurous Chile-Argentina border crossings from south to north.

Most motorcyclists visit National Park Torres del Paine in Chile when they travel through Patagonia. When traveling to the north from this National Park, you will have to ride on the Argentina side of the border because there are no roads going north from the National Park in Chile. The first option you have to go back into Chile is Paso Rodolfo Roballos, because the border crossing at Villa O'Higgins is only open for pedestrians and cyclists, not motorcyclists.

It's a small border crossing with laid back border officials. The closest towns where you can find accommodation and petrol are Bajo Caracoles in Argentina and Cochrane in Chile. They are about 250 kilometers apart from each other.

Tip: keep in mind that the petrol station in Bajo Caracoles regularly runs out of petrol for a few days at the time. There is no ATM here either, so make sure you bring enough cash!

From Bajo Caracoles to the border, you can choose between two routes. The northern RP 41 or the southern RP 39. I chose the slightly longer RP 39 because it goes through the Andes a bit longer than the northern route. The RP 39 is a relatively well-maintained gravel road but it did have some corrugated parts. The first part of the road is flat, but soon after you reach the mountains with stunning scenery.

This entire route is unpaved gravel until you reach the Carretera Austral just north of Cochrane. 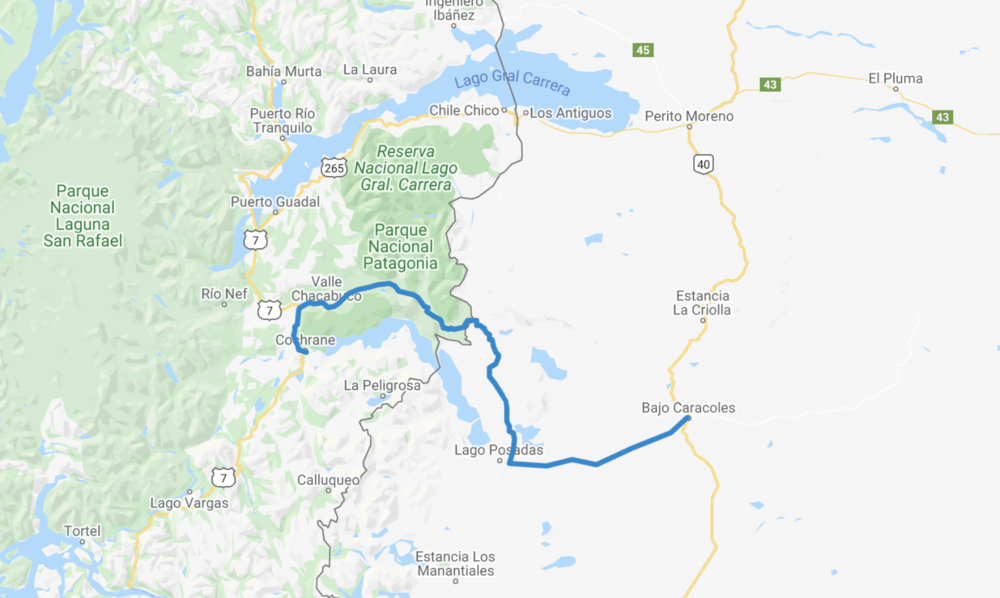 Another small and quiet border crossing can be found at Paso Pichachen. Using the border crossing here, means you will ride through National Park Laguna del Laga (free passage) and past Volcano Antuco. This snow-capped volcano has an elevation of 2,979 meters and even though it is active, it hasn't erupted since 1829.

The road is paved until a couple of kilometers before the entrance to the National Park and remains unpaved all the way until Antacollo. Part of the route runs close to the volcano where you will ride on black volcanic ash and lava - very cool! 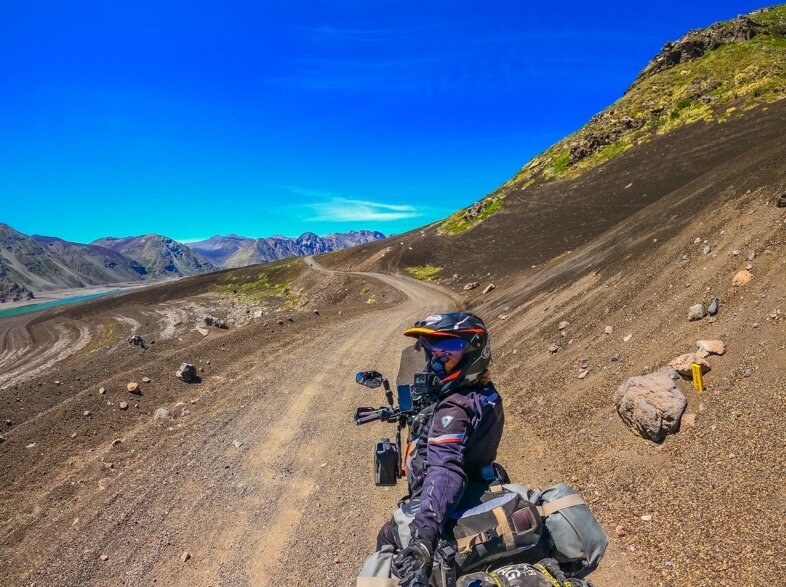 Along the way, on the left side of the road, you will pass a large monument that is built at the foot of the volcano. The monument is a memorial site for the 45 young soldiers of the Chilean Army that tragically died in a blizzard while doing a training march in 2005.

This border is only open in summer time, so make sure to download the “Fronteras” app beforehand to check if it's open!

From the customs and immigration check at the Chilean side of the border, it is another 22 kilometers to the top of the pass at 2,060 meters altitude. After that, it's another 40 kilometers to the Argentinean checkpoint, so be prepared for a long ride in no-mans land! I decided to stay the night in Andacollo, a small town with an amazing setting!

This town has two petrol stations which were both out of order, so the first place for me to find petrol was Chos Malal. Between where I started in Chile up until the petrol station in Chos Malal, I rode more than 200 kilometers. 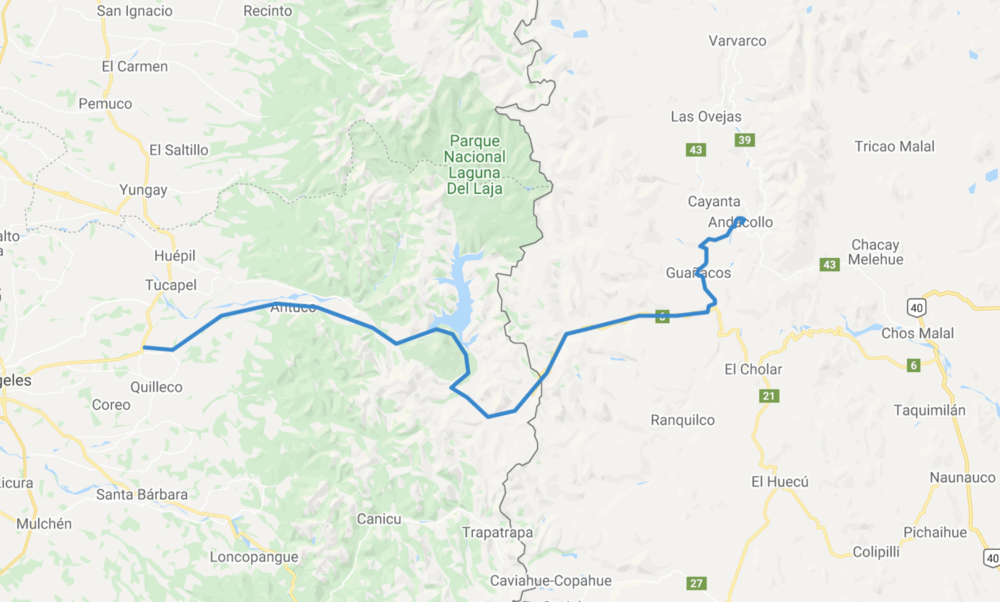 Click here for episode 40 where I cross the border at Paso Pichachen.

Riding up north through Chile and Argentina, you will notice that every border crossing is at a higher altitude than the previous one. The border crossing at Paso Agua Negra leads you to a 4,753 meters altitude. That is serious!

The road just before and after the pass is not for the faint-hearted either. The gravel road is narrow, about the width of one vehicle, and without a one-mistake-and-you-tumble-down-a-hundreds-of-meters-high-cliff-protection. So don't make any mistakes here!

Tip: The customs offices of both sides are about 140 kilometers apart, so make sure that you fill up on gas in Las Flores in Argentina, because your next opportunity to fill up your tank is at Rivadavia in Chile. 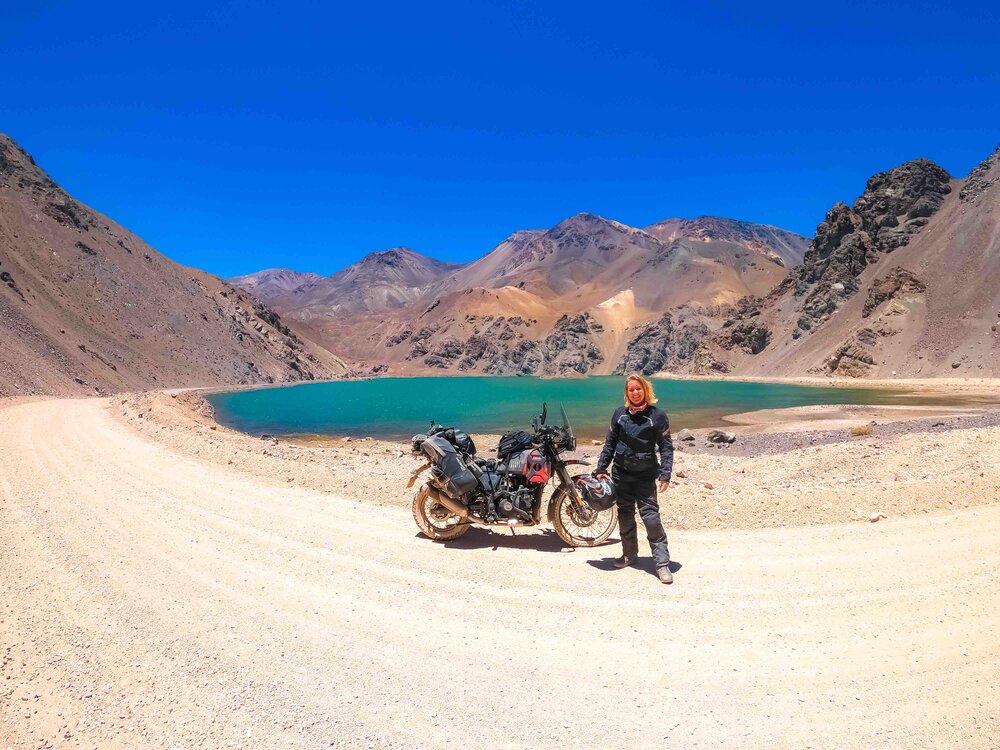 When I was there, parts of the road after the Argentinean immigration and just before the Chilean immigrations were paved. The remainder of the road was unpaved gravel, but of good quality. The scenery is absolutely fantastic, especially around the high altitude lake Embalse la Laguna on the Chilean side.

After you officially enter Chile, you will ride on the Ruta 41 through Valle del Elqui. This beautiful valley has its own micro-climate, causing it to be noticeably warmer than close-by town La Serena. This warm climate makes it Chile's prime location for growing pisco grapes. The clear skies also allow for amazing star gazing in one of the several observatories in the valley.

Click here for episode 44 where I cross the border at Paso Agua Negra.

My next favorite border crossing is the San Francisco pass, which is also above 4,700 meters altitude. The entire stretch from Copiapo, Chile until Fiambalá, Argentina is newly paved and in excellent condition. Despite the perfect road conditions, I haven't seen much traffic!

For the more adventurous riders, there is a detour worth riding which is unpaved. Instead of following Ruta 31 in Chile, take the C-601 road. This detour will lead you through National Park Tres Cruces and past Laguna Santa Rosa. You are pretty much guaranteed to be alone on this gravel road. Just note that right after the National Park, you are driving past salt flat Salar de Maricunga and this 10 kilometers stretch was quite sandy in parts. When you turn onto the Ruta 31, don't forget to drive about 10 kilometers back to get yourself stamped out of Chile!

Tip: If you take the detour through National Park Tres Cruces, mark the location of the customs/immigration of Chile in your navigation system so you don't miss it! 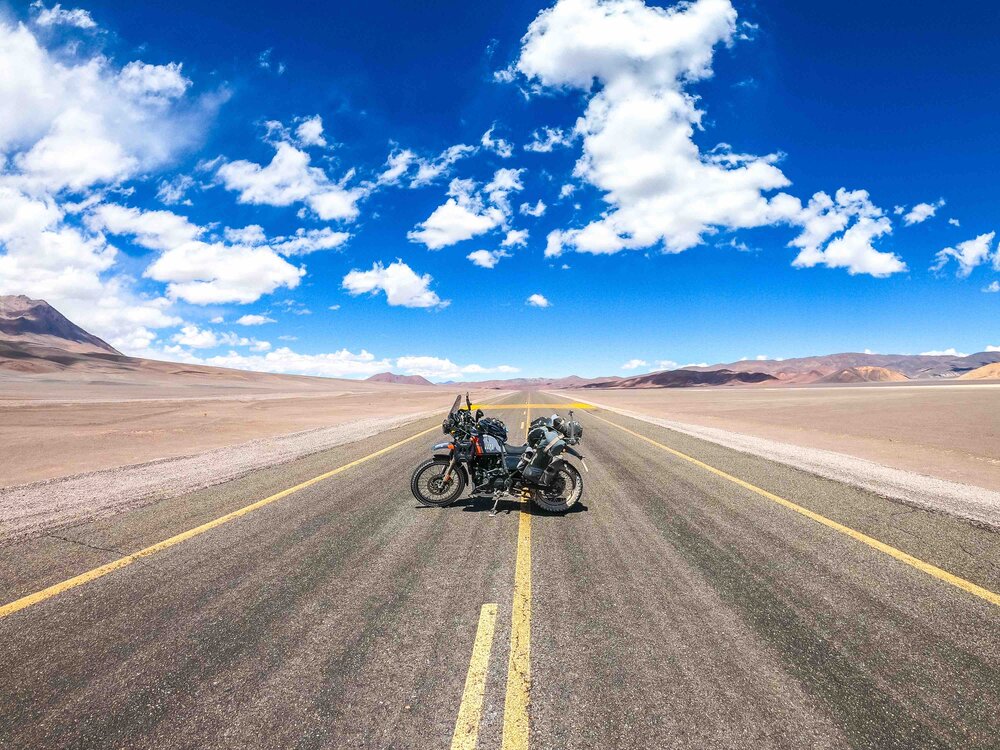 Close to the actual pass you will spot Volcano Ojos del Salado, the world's highest volcano with a 6,891 meters altitude. This is not the only volcano in the area though. The entire border area is dotted with volcanoes, salt lakes, and stunning vistas!

After stamping into Argentina, you will ride via Ruta 60 through a narrow colorful gorge called ‘Canyon de Indio' before reaching Fiambalá. This was without a doubt the most impressive gorge I've ever passed through.

Make sure you take plenty of fuel with you because this route (including the off-road detour) is almost 500 kilometers. Fiambalá will be the first town on the Argentinean side with a petrol station. 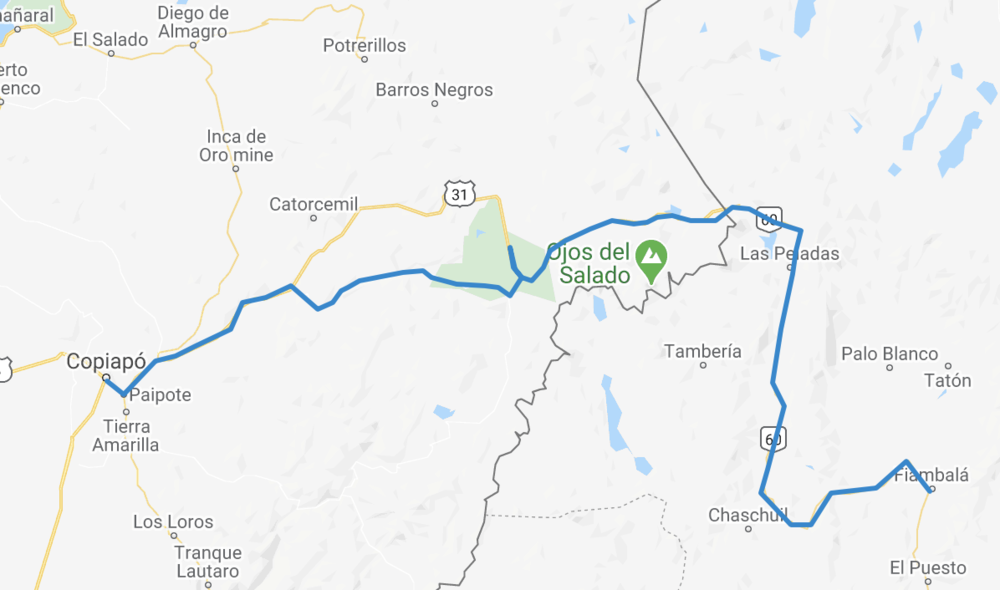 In northern Argentina, there are two border crossings you can take to get to Chile, Paso Jamo and Paso Sico. Both are fully paved on the Chilean side, but on the Argentinean side, the road to Paso Jamo is paved and to Paso Sico unpaved.

Needless to say that Paso Sico receives far less traffic than Paso Jamo. The border officials at Paso Sico told me that on average, only 5 vehicles use this border crossing in a day. To reach it, you have two options. You either take the horribly corrugated and sandy road from San Antonio de los Cobres or take the paved road towards Paso Jama and cross over to Paso Sico via the small dirt road RP 70b.

I chose the latter option and it was a fantastic route. The RP70b is maintained regularly and besides one pass (Abra de Japones) at 4527 meters altitude, it's relatively flat and goes through beautiful terrain. This road leads to the small village of Catua, from where it's a final 10 kilometers or so to the border post.

This border post is still in Argentina, but it also contains the Chilean customs and immigration office, so you can do it all in one go - super convenient! But more so, they have a large building with three dorms, each containing around 10 beds where you can spend the night, for free! 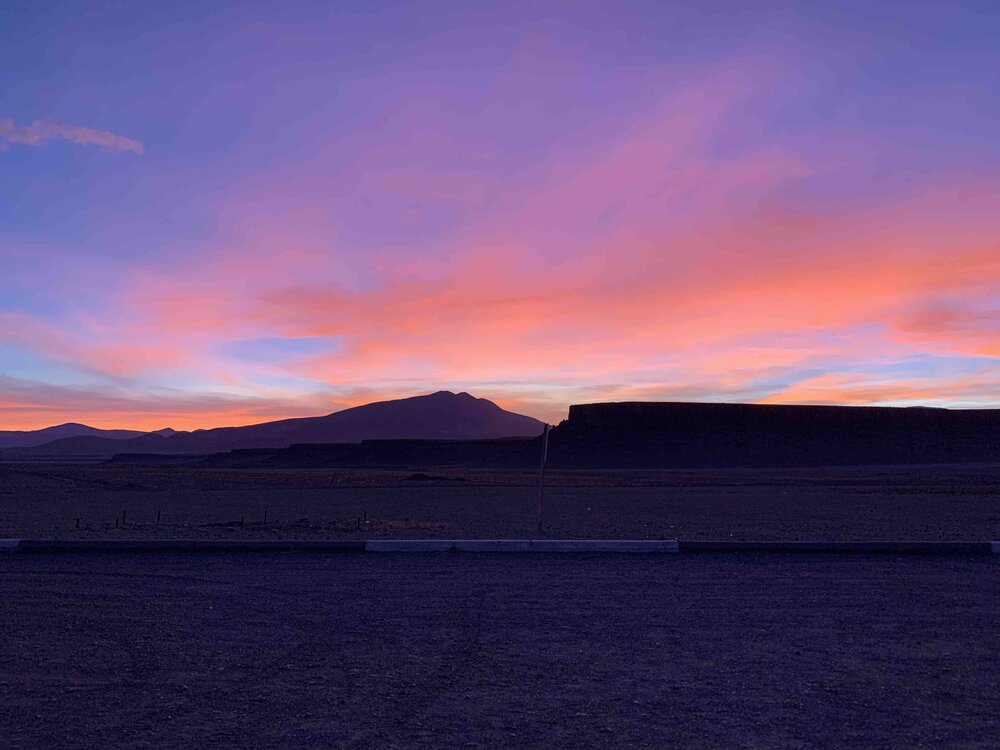 There is a kitchen you can use, so all you have to do is bring your own food! There are no other buildings or people around the border post for dozens of kilometers, so it's a great place to spend the night and enjoy the sunset or sunrise.

After doing the immigration and custom formalities, it's another 10 kilometers or so until the actual border with Chile. From here the road is perfectly paved all the way until San Pedro de Atacama. On the way there, you will pass some of the best scenery of the Chilean/Argentinean altiplano. 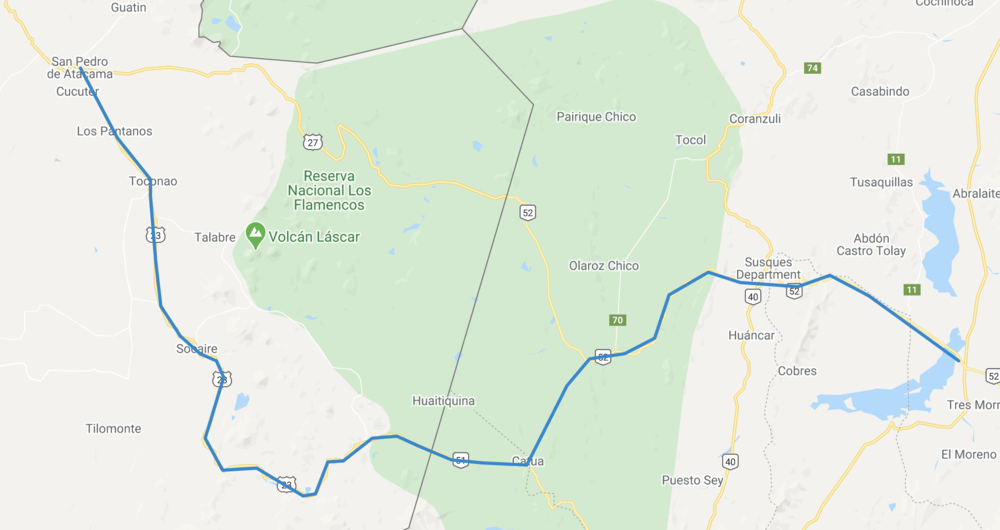 Click here to watch episode 53 where I cross the Paso Cico border.

Have fun, ride safe and try to cross between Chile and Argentina as many often as you can. You won't regret it!

Best rides and sights in No... Seven detours to make Ruta ...

10 Tips for motorcycling Ruta de las Lagunas by yourself