Argentina is, after Brazil, the second largest country of South America with a whopping 2.78 million km² of land. You will find flat pampas around Buenos Aires, wild Patagonia in the south, and even some rain forest close to the border with Brazil.

I spend almost 4 months motorcycling through Argentina but still, I have seen only a small part of this huge country. The area that I liked the most, and absolutely surprised me, is Argentina's northwest region. The provinces of Catamarca, Salta, and Jujuy are an adventure motorcyclist paradise!

In this article, I share my 5 favorite rides and sights in this region.

The vast majority of motorcycle travelers in Argentina travel via Ruta 40 through the Catamarca and Salta provinces. For a more adventurous and off-the-beaten-track experience, consider the western route via El Peñon, Antofalla and Tolar Grande.

The route from Belen to El Peñon is mostly paved and an easy ride. On this stretch, you will do quite some climbing and you will remain to ride at high altitudes until San Antonio de los Cobres. The small village El Peñon is located at about 3,500 meters and set in front of a stunning background of high altitude volcanos. 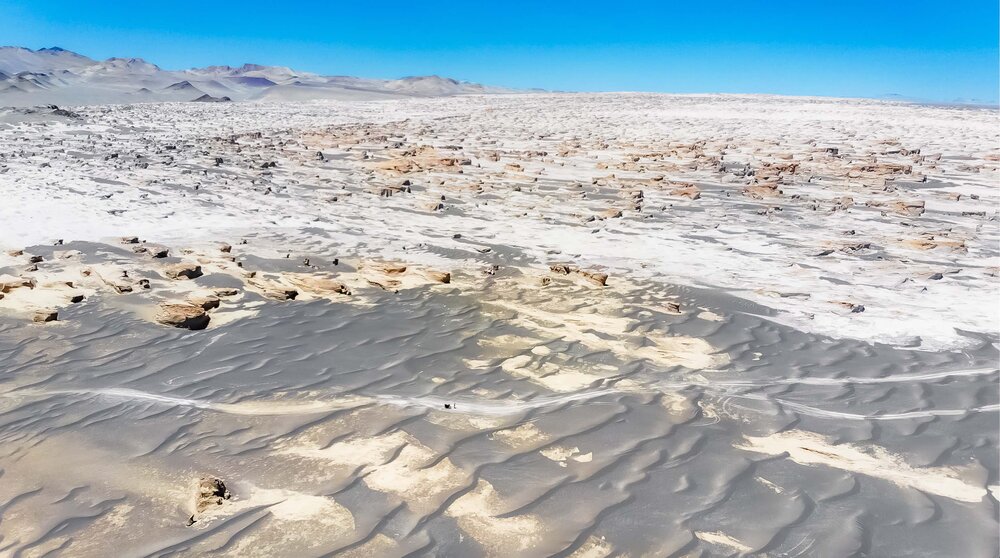 From the small town of El Peñon it's another 35 kilometers to Campo de Piedra Pomez. The first 5 kilometers out of town are paved, but after that you will make a turnoff to a gravel road with the sign ‘solo 4x4'. Make sure to take some air of your tires because the track not only runs past and over volcanoes but is also mostly sandy. In some places, the track is in pretty bad shape due to tour companies arranging tours in 4x4 cars which kick up sand and cause pretty bad corrugations. Yes, I am blaming the cars, us motorcyclists don't do such a thing!

The odd 60 kilometers return trip over this corrugated sandy track is definitely worth it though! The site Campo de Piedra Pomez consists of volcanic pumice which has eroded in a unique way. The beautiful structures are especially well visible from the air when using a drone.

Click here to watch episode 48 about my ride to Campo de Piedra Pomez. 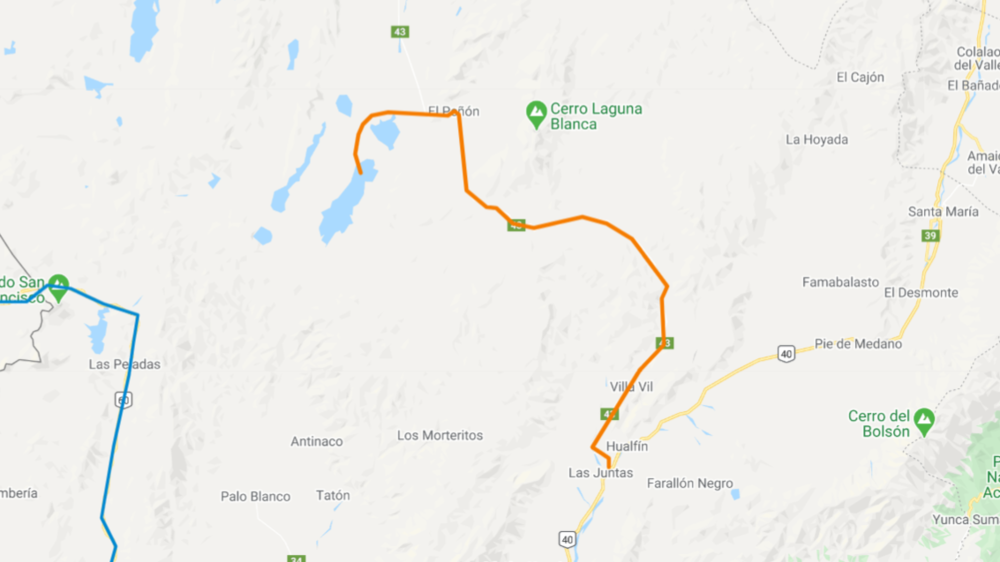 Continuing the adventurous route to the north from El Peñon you will ride through vast and remote landscapes. Don't forget to fill up your tank at Antofagasta de la Sierra, or you will strand in the middle of nowhere. From Antofagasta all the way to San Antonio de las Cobres you ride on unpaved tracks, which will take quite some gasoline.

It is at Antofagasta where my second favorite ride in this region starts. During this ride, you will slowly climb up to the pass of Kolla Atacamena at 4,635 meter altitude, after which you descend to the Salar de Antofalla. This descend is quite steep and sandy in parts, so I recommend riding this route south to north instead of north-south if you can! The views when descending to the Salar are breathtaking!

Just before the town Antofalla the track goes up again and you climb again until you reach a plateau at about 4,000 meters altitude. This part of the route, until you reach Cono de Arita, is tough. The track is mostly corrugated gravel and riding this type of track at 4,000 meters will take more energy than usual. This place is isolated and you shouldn't expect to encounter any other vehicle.

After about 20 kilometers you descend to the next salt flat, which is called Salar de Arizaro and it's Argentina's largest salt flat. Close to the southern edge of the salt flat, you will find a strange geological feature sticking out of the salt flat: the Cono de Arita. 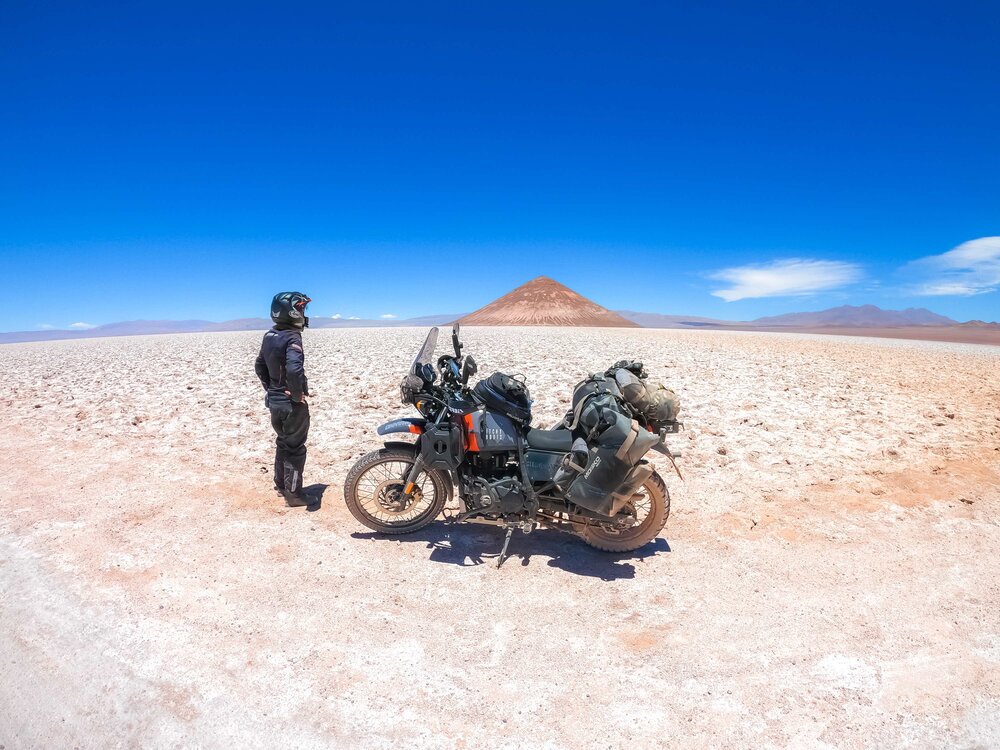 The perfect conical shape suggests this is a stratovolcano. People have even claimed that it's a pyramid of some sort of extraterrestrial origin! The truth is that Cono de Arita almost turned into a volcano, but the volcanic activity was too weak for it to burst through the volcano's crust. So it turned out to be nothing more than a granite rock which eroded evenly into a 147 meters high and perfect triangular rock.

Keep in mind that it is not allowed to climb the Cono de Arita, because it's considered sacred by the local people!

The last stretch from Cono de Arita until Tolar Grande is half-paved and you can ride at least 70 kilometers per hour without hurting your motorcycle. A huge difference from the horribly corrugated sandy track you have to cover coming down towards the Salar de Arizaro!

Click here to watch episode 49 of my ride to Cono de Arita. 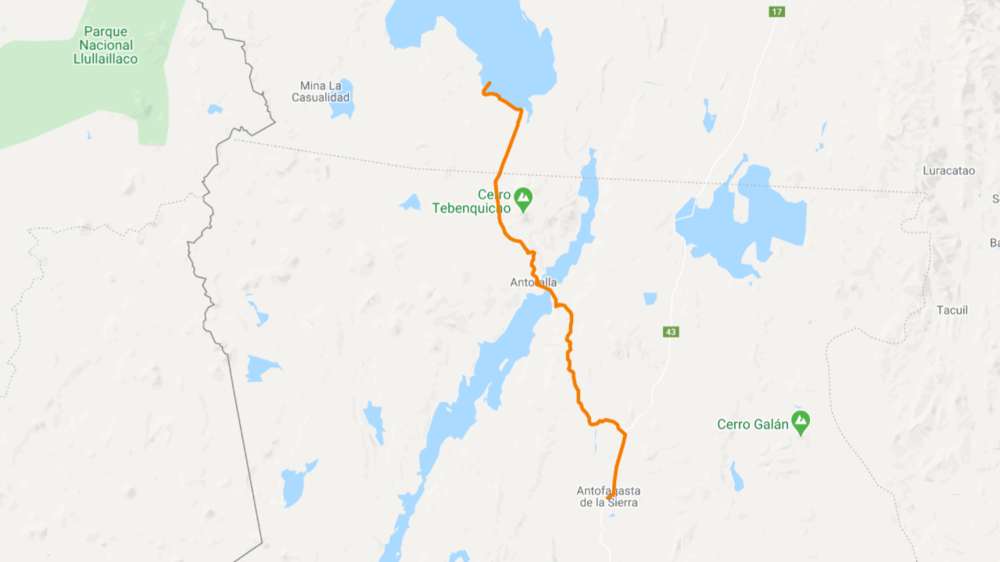 They say that all roads lead to Rome. The Argentinean version of this saying would be something like ‘all stunning roads lead to Salta'. The Salta region has some of Argentina's most beautiful scenery and almost all roads in the area are spectacular.

Originally I planned to ride the Ruta 40 from San Antonio de los Cobres to Cafayate, via Cachi and then catch Ruta 68 North towards Salta. But travel fatigue forced me to change my plans. I decided to ride the shorter, easier, Ruta 51 from San Antonio de los Cobres straight to Salta. Less spectacular, but still a beautiful route. I passed colourful rock outcrops and mountains dotted with large cacti. I spoke with plenty of other travelers and can vouch for Ruta 40 and Ruta 68 if you have the possibility and time! Just make sure to check the road conditions of Ruta 40 beforehand, because after heavy rains parts of the road may have been washed away and rivers difficult to cross. 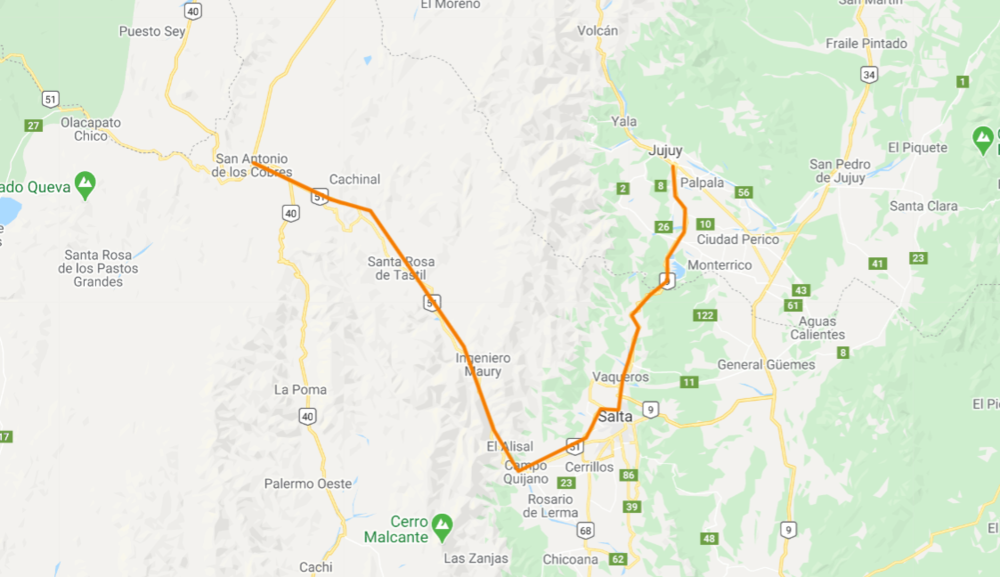 I ventured out of Salta on the old Ruta 9. This road runs straight from Salta to Jujuy. Locals don't use this road anymore but take the new Ruta 9 that reaches Jujuy via Ruta 34 and Ruta 66. The old Ruta 9 is paved, and the narrow road snakes through a beautiful green tropical forest. It will be the greenest area you'll see for a while, no matter if you are coming from the north or the south.

As a bonus, the number of twisties will bring out the inner race-track rider in you for sure!

Click here to watch episode 51 where I leave Salta on the old Ruta 9 and also visit the 7 coloured mountain of Purmamarca. This mountain is my next tip for places to visit in Northwest Argentina. 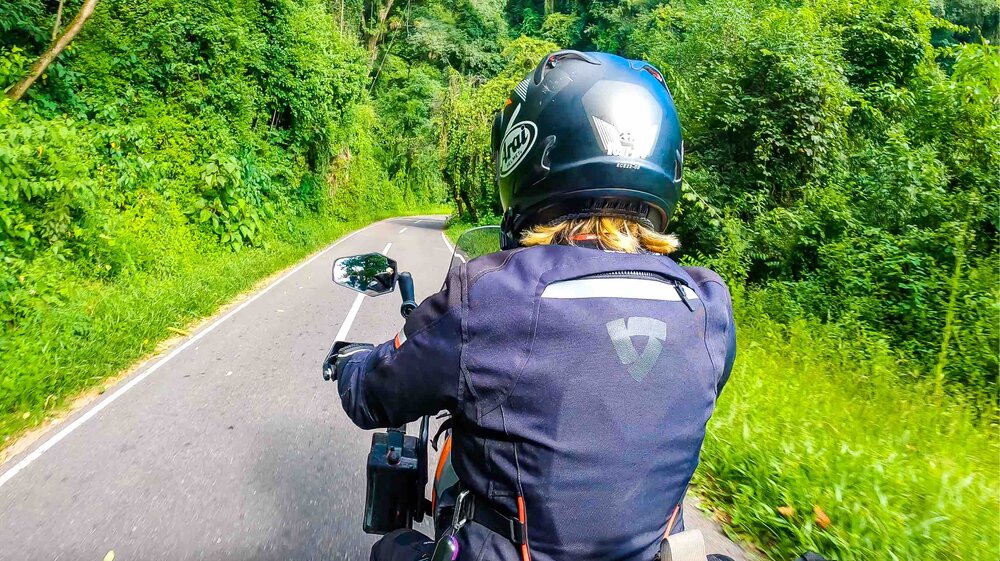 The reds, pinks, yellows and greens of the 7 coloured mountain are towering right over the little town of Purmamarca. The town itself is quite touristy, with lots of stalls where vendors try to sell you the typical souvenirs that you find everywhere else in Argentina.

Just behind the town of Purmamarca, on the left side in the picture below, is a few kilometers long gravel track which leads right past some of the most beautiful colourful rocks. To see the mountain in its full glory, it's better to ride a little out of town. 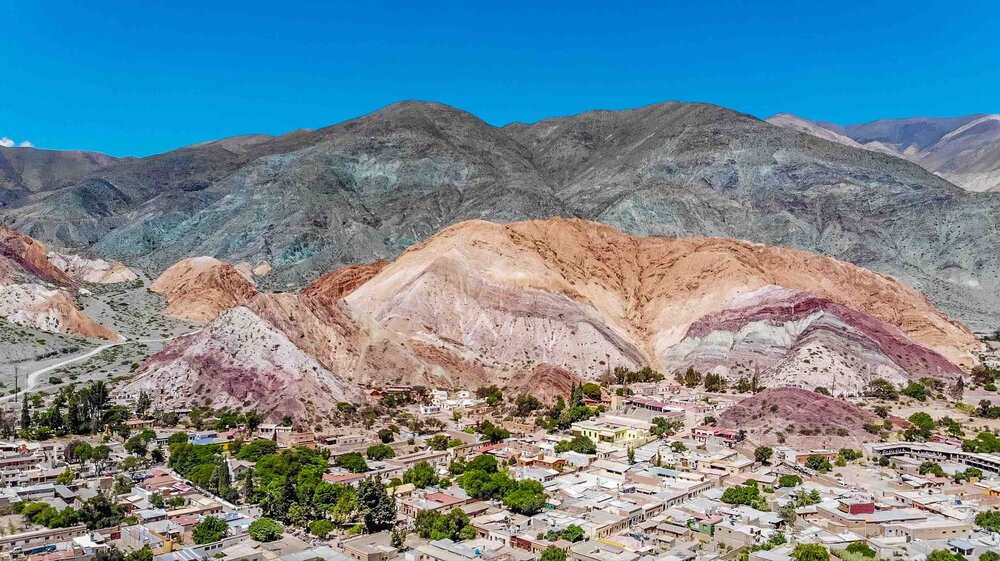 In order to attract more tourists, the tourism board of the town Humahuaca rebranded ‘their' mountain to the 14 coloured mountain. The lookout point for this mountain is about 22 kilometers from Humahuaca. The dirt track quickly climbs to 4400 meters altitude.

I went to this lookout point in the early morning and had the entire place to myself. I couldn't see much though because it was foggy that morning and there was not much sunlight. When you get there later during the day, the views are much more spectacular but you'll have to share it with hordes of tourists. You also have to pay an entrance fee. In the early morning, nobody is managing the ticket office, so I could get to the viewpoint for free.

Click here to see episode 52 where I visit the 14 coloured mountain on my ride to Salinas Grandes, my next tip for when you visit the northwest of Argentina. 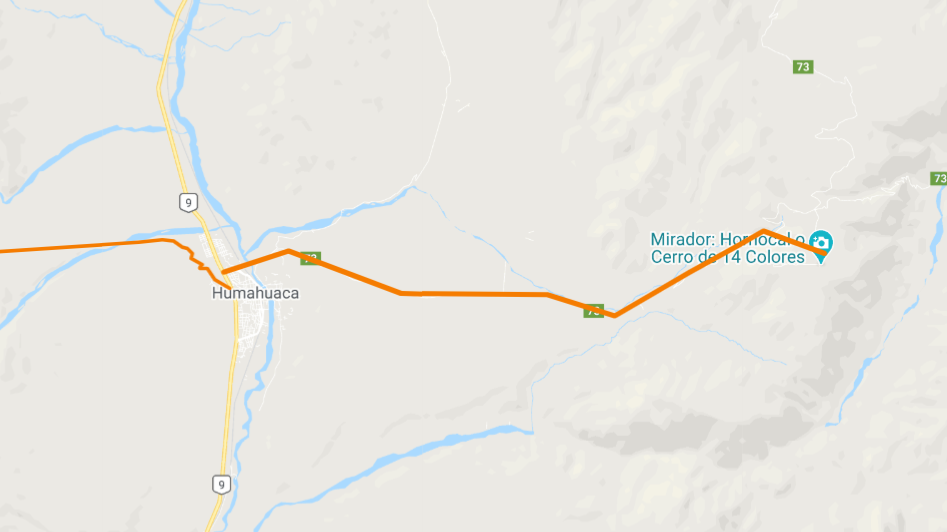 If you are up for a spectacular motorcycle adventure, consider taking the backroad from Humahuaca to Salinas Grandes. This road is for the largest part not visible on Google maps, but you can find it on Maps.Me.

First, you take road RP14 which starts from the outskirts of Humahuaca. The first few kilometers are pretty disgusting as you are practically riding through the garbage belt of Humahuaca. But trust me, it is worth it. You are going in the right direction and things will change quickly!

This narrow gravel trail goes up into the mountains until an altitude of about 4,500 meters and winds past huge cacti and offers you incredible vistas. You'll go through gorges and bright red rock outcrops which, in my opinion, beat those of the coloured mountains! 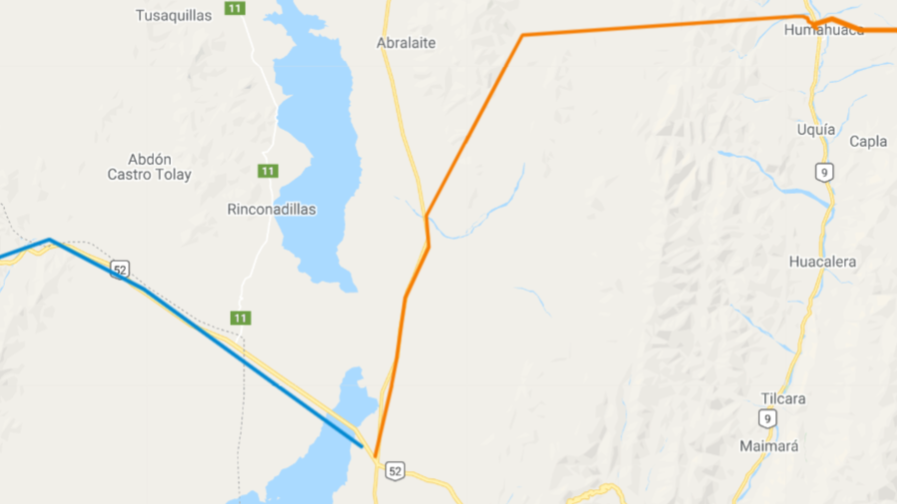 Except for a loader that was working on a part of the track, I didn't see any person or vehicle until I reached the small mining town of El Aguilar. After this village, you start climbing again until you descend towards Salinas Grandes. On your way, you'll go through many small river crossings and pass a couple of houses.

When you finally reach Salinas Grandes, you can walk over the salt flats there. It's not allowed to ride independently over these salt flats and I wouldn't recommend it anyway because there is no place nearby to wash the salt off your motorcycle. 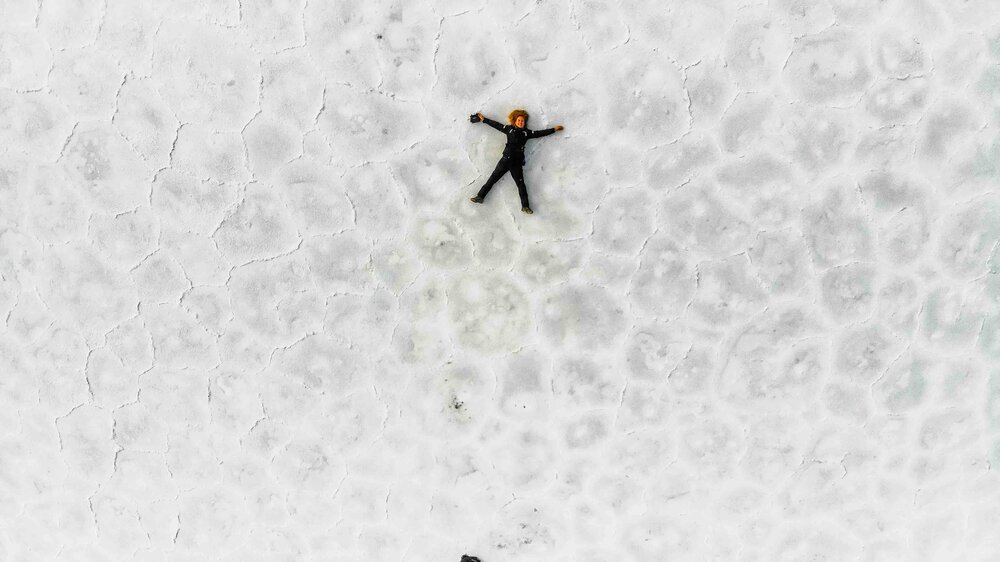 Continue watching episode 52 for my ride to Salinas Grandes. In episode 53 I visit the salt flats and talk a bit more about this unique place before I ride to Paso Sico, one of my favorite border crossings between Argentina and Chile.

Northwest Argentina has many, many more great tracks to discover! Try and allow plenty of time to explore this area. I know for one thing that I want to come back here one day to ride many more dirt tracks through these amazing mountains!

You can find my 5 best rides and sights in Northwest Argentina also in Google MyMaps. Click here to view those, and my other favorite rides mentioned in my mini-series Motorcycling in Argentina.